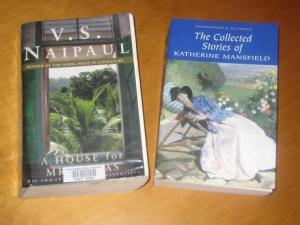 It’s been a long time since I last went to the library (and, if you read this post, you’ll know why!), but I steeled myself a couple of weeks ago and finally got a few books out. The first was The Woman who Walked into Doors; the third is waiting to be read. The second is Nobel prize winner V.S. Naipaul’s A House for Mr. Biswas. And a lovely book it is too.

I’d never read a Caribbean book before (in fact, the closest connection I have to that part of the world is a Trinidad & Tobago football shirt I bought cheaply after the last World Cup and a love for cricket which confuses and infuriates my wife in equal measures), and it definitely wasn’t what I’d expected. Naipaul is of Indian heritage, and the book, set in Trinidad, focuses on the lives of an extended clan, and wider society, of expatriate Indians, the principal of whom being (of course) the titular Mr. Biswas. His full name is Mohun Biswas; however, right from the start, the writer gives him this rather unusual address whenever he is mentioned outside direct speech. Curious?

Not really. This emphasis on his name is part of the point of the book. Living sporadically, from a fairly young age, with relatives and then in-laws, Mr. Biswas’s name is part of his identity and the way the writer lifts him up above the hordes (and there are hordes) of other family members living in the same house. It is this desire to be different, not to be more successful or richer, just to live his own life, which leads him to ruffle feathers and make plenty of mistakes in his quest for the ultimate in achievements: a house of his own.

I live in a country where home ownership is seen as a right – and where increasing house prices and interest rates are viewed as unfair and (the most negative of adjectives) ‘unaustralian‘. However, in WW2-era Trinidad, just having a roof over your head (even if it is shared with a few other families) is seen as a luxury. Mr. Biswas, however, cannot be content with residing in a cacophony of chanting, impromptu school lessons and squawking in-laws; at every opportunity, he attempts, in the face of derision and incredulity from both his relatives and his own wife, to build or buy himself a house: a house of his own.

From the first page we know that Mr. Biswas is, paradoxically, a success story and a tragedy. He will die young, but in a house of his own. The house is shoddy and rickety, but it is his. He has put his ambitions ahead of his family interests, but he is master of his own abode. At the end of the book, there is a tinge of sadness, regret, in contrast with the feelings of pride and success Mr. Biswas radiates in the prelude to his life story. The reader, at the end of 600+ pages of wonderfully-told family drama, is left to answer the question posed by the writer: was Mr. Biswas‘ life worth it? I won’t answer that, but I can say that the book certainly was…

One event I recall from Mr. Biswas‘ slow social ascent was an invitation to a writers’ group where he was asked to read something he’d written. After toiling for a while, he had something, but he couldn’t find an ending. Having read plenty of post-modernist literature, however, he didn’t see that being a problem…

…which brings me neatly to the second part of my trawl through Katherine Mansfield’s Collected Stories. Following on from reading her earliest works, I worked my way through Bliss and Other Stories and The Garden Party and Other Stories last week; to be perfectly honest, 300 pages of short stories, even in sporadic doses was a bit much for my constitution.

These two collections were, as Mansfield herself thought, much more developed than the earlier stories. Aside from the two title stories, I greatly enjoyed Prelude and At the Bay, two longer tales featuring the same Wellington family, and Je ne Parle pas Francais, a wonderfully moody story featuring an enigmatic Englishman, his long-suffering partner and a Parisian narrator who is everything a literary Parisian should be. Some of the twists in the writing in these collections were breathtaking: one particular example was Bliss where the palpable joie de vivre of the main character is frozen in a heartbeat by one simple act. Class tension, domestic drudgery, social roleplaying, repressed homosexuality… all in a handful of wonderful pages.

I suppose it’s my own fault for reading the two collections one after the other, but it did become a bit of a chore towards the end. I found myself wanting to get it over and done with, and the pile of gleaming, unread books on my bookshelf caught my eye more than ever before. Still, Mansfield is not completely innocent in all this. I really do not want to read about anyone with ‘weak nerves’ for the rest of the year, and while stories about spinsters may be all well and good in moderation, they are as bad for you as any drug if you overdose on them.

I suppose the main problem with reading a collection of short stories is that yes, they are great to read – while you are reading them -, but when you are between stories, and you’re not currently reading one, there is nothing to draw you back, nothing to tear you away from your i-Pod, your computer, your television. In short, there is little motivation to return to the book as you are, in effect, starting from the beginning.

Please don’t think that I am criticising these collections (far from it; as short stories go, they are excellent). It’s just that when people describe Katherine Mansfield as the inventor of the modern short story, I’m not sure whether it’s meant as praise or blame. At any rate, the final part of the collection will have to wait for a good while; I’m off to immerse myself in a voluminous Victorian novel, and I won’t be out for a week or so…