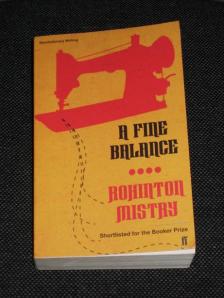 It’s understandable that after occupying India for centuries, the British Empire left behind a wide-ranging and remarkable legacy (by no means all good, of course).   Some of the more visible reminders include a passion for trains, a blazer-clad school system more suited to Manchester than Mumbai, and (if my reading experience is anything to go by) a love for Victorian literature.  How else could you explain the plethora of long, winding, lovingly-crafted classics written by English-speaking writers from the subcontinent?  Last year, I read Salman Rushdie’s Midnight’s Children and Vikram Seth’s bookshelf-busting tome A Suitable Boy; my latest read, Rohinton Mistry’s A Fine Balance, is every bit as enjoyable, brilliant… and long.

A Fine Balance is mostly set in 1975, a year of particular significance in Indian history.  Against the backdrop of the Emergency, a period of virtual martial law declared by Prime Minister Indira Gandhi in a desperate attempt to retain power (and avoid punishment after being found guilty of election fraud), four strangers meet in the doorway of a Mumbai house, unaware that the next year will see them bond into a group which will help replace their absent families.  Dina, a proud young widow seeking tailors to help with her sewing work; Ishvar and his nephew Omprakash, poor, low-caste tailors who have travelled to the big city to make their fortunes; Maneck, the son of one of Dina’s old school friends, abandoning the mountains and his parents’ shop to study for the future.  What follows is beautiful and heart-rending, touching but sickening, enjoyable yet despicable: it’s a very emotional book.

Despite Dina’s initial reluctance to get too close to her employees, through Maneck’s persuasion she eventually softens her attitude, and the four start to create their own family-type unit, passing the lonely evening hours together and helping to fill the gap left by the dead, the absent or (in the case of Dina’s brother) the unpleasant.  However, every time life appears to be looking up, it turns around and bites them, leaving them with literal and metaphorical scars to lick.  I won’t say what they are.

Mistry’s book is an epic work, condemning Gandhi’s selfishness, exposing the cruel practices and horrific retribution of the higher of India’s castes against the lower strata of society and revealing the chaos prevailing in the world’s largest democracy.  It’s not just the more brutal, violent events which stay in the memory; Mistry paints a picture of dilapidated slums, streets filled at night with crowds of homeless people and deliberately-crippled beggars hoping to stand out and make the relatively well-off passersby reach into their pockets for a small coin or two.  In its depiction of the urban poor, A Fine Balance is positively Dickensian – and that’s a very good thing.

There is also a sharp focus on those at the top of the tree, who are divided into three, intertwining groups: the rich, those with high office or status, and the high-caste Brahmins who treat the lower caste Chamaars more like animals than people.  These lucky few are protected from the prevalent misery by virtue of their fortune, and they make the most of it by ensuring that anyone outside their group is trodden down mercilessly into the dirt of the Mumbai slums.  Anyone who has managed to scramble a little way up the ladder is even more fervently in favour of ‘cleansing’ the scum from the streets than the corrupt politicians who think up the ideas, happy to avert their gaze while the poor are mutilated, sterilised and left to rot in the streets.

There is a strong connection between A Fine Balance and Midnight’s Children, particularly in the treatment of the events of the emergency.  In both novels, the blatant misuse of the government’s policy of birth control by sterilisation is woven into the texture of the fictional tale, and in both the infamous Indira Gandhi casts a long shadow over events.  Mistry calls her the Prime Minister, Rushdie ‘the Widow’: like a certain fictional wizard, it appears that she is not to be named…

However, where Rushdie’s story, despite the occasional unfortunate event, has an underlying cheery tone, A Fine Balance can be negative and depressing (in a good way, of course).  There is no progress here, just a series of cycles which sees people built up only to be brutally knocked down again.  This corresponds to the Hindu idea of chronological cycles, with time having no beginning or end, just a cycle of eras which repeat endlessly.  As mentioned in the text, we are currently in Kali-Yuga, an era of vice and ignorance lasting 432,000 years, where no virtue can flourish.  The good news?  Only about 427,000 years to go…

Now that I have thoroughly depressed you, I can give you the tiny ray of optimism that Kali-Yuga would not allow.  This is a wonderfully-written book, one which I am sure to read again and again in the future, even if, at times, it makes for painful reading.  The parallels to the work of Dickens are not limited purely to the idea of writing about the plight of poor people; the way in which Mistry’s eye notices every little detail, his nose every pungent odour, his ear every conflicting note of the cacophony permeating Mumbai street life, is reminiscent of his Victorian forebear’s description of life in nineteenth-century London.

However (sadly), I must leave you on a another depressing note.  At the weekend, I read an article in The Weekend Australian about the rather haphazard progress India is making in preparation for the Commonwealth Games in New Delhi later this year.  On top of the expected accusations of incompetence, ineptitude and outright swindling, came a familiar, yet saddening, tale: in order to ensure that the eyes of the world only see what the authorities want them to see, 300,000 slum dwellers have been removed from the outskirts of the capital so far, and a further 40,000 or so will be forced on before the games begin.  Plus ca change…

*****
P.S. Jackie of Farm Lane Books has created a wonderful array of supplementary information on this novel at Book Drum, a site where passionate readers help others get the most out of their favourite novels: please drop by to get even more information about A Fine Balance!