Hold on, everyone – there is a light at the end of the tunnel.  Would you believe that I am almost up to date with the reviews I missed during my enforced absence?  You would?  Well, aren’t you Mr/Ms Smartypants…  Just a few more books to slate review, and we’re fully up to speed – a deep breath, and away we go.

The first of today’s books is Vikram Seth’s An Equal Music, and I’m afraid Seth is one writer I doubt I’ll be slating any time soon.  Just like A Suitable Boy, An Equal Music (if nowhere near as long) is quite simply a sumptuous read, one of those books you just lose yourself in, curled up in your favourite armchair on a cold, rainy, November afternoon.  It’s the story of a violinist, who unexpectedly meets up with an old flame and falls into the trap of trying to rekindle lost passion and relive past experiences.  Set in London, Vienna and Florence (a place I have never visited but which has appeared alarmingly frequently in my reading recently), the story proceeds quietly, but measured, very much like the music described in the text.

As well as being a story of reignited love, An Equal Music is also, some would say just as much, a novel about music.  Michael, our romantic violinist, is a member of a string quartet, and Seth creates a credible picture of an incredibly complex set of relationships and egos, which must all be appeased and balanced in order to allow the group to make music.  Now, I wouldn’t know a Stradivarius from a cheap fiddle, but many other people have hailed this book as a magnificent portrayal of what life as a musician is really like – so believe them, if not me, when I agree wholeheartedly with that sentiment 🙂

Alas, the problem with Seth is that he hasn’t actually written many novels, something I’m rather upset with him for.  He’s obviously too busy with his poetry, travel writing and keeping the streets of Gotham City free of crime (actually, that might be someone else) to devote himself to cranking out more fiction.  However, he is currently in the process of writing a follow up novel to A Suitable Boy, set two generations later and entitled (inevitably) A Suitable Girl, and I am greatly looking forward to the appearance of this particular book.  Sadly though, there is a cloud on the horizon.  The release date for the novel?  2013… 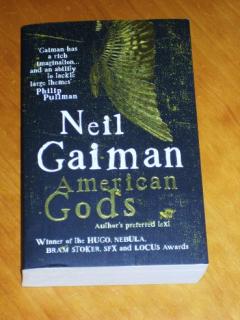 No real slating for my second book today either (where is the bile?).  American Gods, Neil Gaiman’s epic fantasy/mythology/crime novel, follows Shadow, a recently-released prisoner, across America in the company of a supposed deity who goes by the name of Mr. Wednesday.  As we travel from town to town in the company of the enigmatic Shadow and the much-larger-than-life Wednesday, Gaiman treats us to a story mixing a description of current American society and the origins of its multicultural people.  It’s a classic road trip, in the vein of On The Road, but it’s also a thought-provoking look at where we’re heading.  Oh, and it’s also a great whodunnit…

Where Neverwhere was claustrophobic, reading American Gods could make an Agoraphobe have a nervous break down.  Gaiman manages to capture the essence of a vast country of contrasting regions and lifestyles, all the time slowly unfolding his tale, a story of the Gods the immigrants brought with them in their heads, and the struggle between traditional and modern ways of life.  It’s an allegorical last battle, where all must stand and be counted, rallying around their standard bearer in a fight to the death.  Or is it?

There’s a definite progression from Neverwhere, and Gaiman succeeds in blurring genre lines, creating a book which will appeal to almost everyone who enjoys reading.  Anyone with more than a passing interest in mythology will enjoy seeing the Gods come alive, interact and adapt to modern life.  However, this book doesn’t quite make it into the top rank of writing for me, and that’s to do with, well, the writing.  Perhaps I’ve been spoiled by reading Vikram Seth and Natsume Soseki recently, but I missed the elegant prose of Kusamakura and An Equal Music.  Whether that’s possible in such a book as this, I’m not sure, and I hasten to add that I still loved this novel: I just wish that the language had flowed just as perfectly as the tale itself.  Is that too much to ask?

*****
So, I’m pretty much up to date – yay!  Stay tuned in coming days for my first submission for The Classics Circuit and something new…

8 thoughts on “A Small Amount of Catching Up – Part 3”