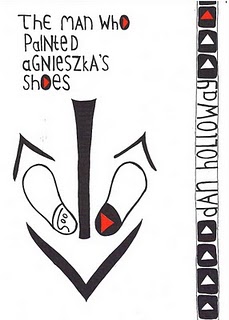 Back in 2009, Dan Holloway, author of the excellent Songs from the Other Side of the Wall, blogger, indie publisher and generally someone with way too much time on his hands, started an intriguing project, deciding to write (and publish) his latest novel on the discussion pages of his Facebook group.  Twice a week, after some preliminary teasers and explanations, a chapter was released, and members of the group applauded, booed or pointed out typos as they saw fit.

As the novel neared its end, Dan took a break to concentrate on one of his many other projects, and the novel stayed suspended there, almost complete (at least in a draft form, anyway), until he finally got around to adding the finishing touches to the story, honing the draft into a finished form and releasing it electronically in various formats.  Mainly because I kept nagging him to get it finished 🙂  The result is the wonderful (and wonderfully-named) The Man Who Painted Agnieszka’s Shoes.

Aggie, as it is familiarly known, is the story of Dan Griffiths, a photojournalist with the job of finding a new angle on a famous story; the tragic (and unlikely) demise of Agnieszka Iwanowa, a young Polish businesswoman living in London.  Thanks to a youtube video of her accident, along with a publicity stunt by the elusive artist Ludwig, the images of Agnieszka being dragged to her fate have become pop-art icons, and it is Dan’s mission to find a way to put a fresh spin on the story.

Dan, however, has suffered his own loss, and the pursuit of the truth behind Agnieszka’s fate leads him to confront the unresolved disappearance of his daughter Emma.  As his journey leads him into a painful underworld where art, politics and murder merge into a surreal parallel existence, the search becomes less and less about the Polish icon and more about his own, personal suffering.

As with Holloway’s earlier book, Aggie has several nods to Haruki Murakami, with the search for a missing person and the blurred lines between the real and imaginary worlds reminiscent of both The Wind-Up Bird Chronicle and Sputnik Sweetheart.  However, this novel is decidedly darker and, with its focus on pain and suffering, is closer in style to works by other Japanese authors, such as Ryu Murakami, Natsuo Kirino or Hitomi Kanehara.

Why mention all these Japanese authors (you may ask)?  Well, firstly, I happen to know that Mr. Holloway is a big fan of several Japanese writers; and secondly, one of the principal characters is Japanese…  You see, Shuji Nomoto, a teenage recluse and one of the main protagonists of the novel, lives in Kobe and, quite conceivably, could have come straight out of a story from Murakami’s post-Dai-Hanshin-Earthquake collection, after the quake.  Shuji, just like the unfortunate Agnieszka, the elusive Ludwig, and the AWOL Professor Sydney Byfield is one of the many people tangentially, but inextricably, linked to Dan, and his missing daughter.

Dan (Holloway, that is) is obviously obsessed with art, and this comes across in the writing, with many a visual metaphor or leit-motif.  The role of lines is prominent in the novel, whether they be artistic (the style used in paintings or the contours of sculptures), human (there are many descriptions of people with a focus on the sharpness, or blurriness, of their outlines) or metaphorical.  In particular, the idea of crossing lines and boundaries, transgressing against moral norms or even crossing into alternative realities crops up frequently.

Associated with this is the idea of entropy, or (as a well-known author once wrote) the fact that things fall apart.  Faces sag, make-up hides wrinkles and scars (unsuccessfully), minds creak and snap under pressure – as do tendons and sinews…  The city itself seems to be falling into a spiral of dirt and decay, a natural consequence of the pain and fatigue felt by the people who live there.   Things. Fall.  Apart.  In the best possible way, of course.

As you might(!) have gathered from the post, my objectivity may well be a little compromised in reviewing this novel, but if you’re a little hesitant about trusting my slightly-biased view, there’s some good news – it won’t cost you much to check it out.  The Man Who Painted Agnieszka’s Shoes is available as an e-book for just UK70p, or US99c, from Amazon UK, Amazon US and (for those of you without Kindles) Smashwords, where you can get PDF or ePub versions.  That’s not much of a gamble now, is it?

Biased as I am, I was very happy to finally get the finished version of the book, and I am grateful to Dan for including us in the creative process – and for putting us out of our misery!  Rest assured, if you’re looking for an entertaining, thought-provoking look at how media affects how we see life in the twenty-first century (one that doesn’t mention Charlie Sheen), The Man Who Painted Agnieszka’s Shoes is well worth a read.

Did I mention that I was a little biased?

5 thoughts on “There’s Something about Agnieszka…”