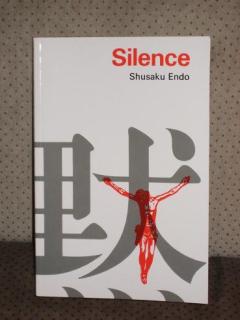 Last year, I read David Mitchell’s The Thousand Autumns of Jacob de Zoet, a novel set in 17th-century Japan at a time when Dutch traders were the only westerners allowed into the country.  While I enjoyed the book (it is a David Mitchell creation, after all), I couldn’t help but feel that he had missed an opportunity as I was eager to learn more about life in Japan at that time, rather than just the trading post at Dejima where most of the novel was set.  Luckily for me, Shusaku Endo’s Silence (translated by William Johnston) fills that gap nicely – and, more importantly, is a very, very good book.

Silence follows a Portuguese Catholic missionary,  Sebastiao Rodrigues, on a quest for the truth behind a rumour which makes its way back to Europe.  Cristovao Ferreira, the most senior priest left in Japan, has apparently committed apostasy (the act of renouncing one’s religion) and has taken on a Japanese name.  In order to ascertain the truth of the information that has leaked out from behind Japan’s curtain of exclusion, Rodrigues and two colleagues set off amid pomp and cheering on the long voyage to the Orient.  While the start of the quest is a joyous affair, the enormity of the task, and the strength and faith required to undertake it, gradually begin to sink in.  Having picked up an expatriate Japanese in Macao, the suspicious, cowardly and sly Kichijiro, Rodrigues eventually manages to reach his destination, where he goes into hiding and prepares himself for his greatest test of faith…

The first part of the book is written in the form of letters written by the Portuguese priest, and this is apt as the novel as a whole is concerned more with Rodrigues as an individual than with his mission as a whole.  In a country where Christianity, especially for those who refuse to renounce it, can be punishable by death, being a missionary is something of a suicide mission and only possible for someone with the strongest of beliefs.  However, when people suffer for those beliefs, when innocent souls are tortured, burned and killed, when God refuses to intervene… is it possible to maintain your beliefs?  Can you keep the faith in the face of God’s continual silence?

As can be expected from the title, silence plays a major role in the novel.  Rodrigues, determined as he is to maintain his faith, must nevertheless question God’s lack of intervention at a time when, in his eyes, it is most needed.  As the people he has come to save lay down their lives for his religion, he struggles to accept their sacrifices and see them as part of a greater scheme.

However, it is not only a metaphorical silence which pervades the novel, but also a literal one.  In several important passages, particularly those involving great pain and suffering, God’s reluctance to act is married to an eery quiet falling upon events, further trying Rodrigues’ strength. Villagers are drowned in the sea, and the only sound is the gentle murmuring of waves; a man is brutally beheaded for refusing to apostatise, and all that can be heard is the occasional cicada; Rodrigues stumbles upon the scene of a massacre, and all that remains are a few cats amidst the wreckage – and still God remains silent…

One of the more interesting points about this book is the idea of a western point of view, written by a Japanese author.  Endo is a Catholic himself, and his sense of confusion and compromise comes across in his portrayal not only of the suffering Rodrigues, but also of the intriguing Kichijiro (of whom more later…).  One thought I had at the start of the story was that it would be very easy to turn this book into a pro-Christian anti-Japanese tale, but the writer balances the sympathies very nicely.  For those Christians among you, it might appear that the Japanese behaviour is unjust, but the reality is that the missionaries were illegal spies in a foreign country, expressly breaking the law and inciting disobedience amongst the local people too.  And let’s face it, the Catholic church itself was no stranger at the time to intolerance and cruelty against people with different opinions to their own..

The prevailing opinion seems to have been that whatever the intentions of the Christian missionaries, Japan was a ‘swamp’, a field in which Christianity’s roots could not take hold, and the ensuing perversion of the tenets of the religion (along with the suspicion that conversion was paving the way for later subjugation to the European powers) proved that the best path forward was to eradicate the foreign faith, described by one of the characters as an ugly, barren woman.

Rodrigues suspects several times that the Japanese form of Christianity is not all that it should be, observing that many villagers appear to attach more importance to the Virgin Mary than they should, but is this any different to his own obsession with Jesus – in particular with the beauty and expression of his face?  In fact, in light of the immense sacrifice made by these early Japanese martyrs, who really had the greater belief in God?  This is a thought for the reader to ponder as you follow Rodrigues through all the stages of his own private ordeal, until he is forced to decide what his religion means to him and what is more important – theoretical doctrine or human kindness.

*****
I was going to end my review there until I remembered that I read a short story by Endo in The Oxford Book of Japanese Short Stories last year – and decided to go back to take a second look.  Unzen is the tale of a Catholic novelist who travels to the scene of the torture of early Christians to see for himself the place of their pain and suffering.  At the time, it wasn’t one of my favourite stories among the collection, but after reading Silence, the tale takes on a whole new dimension.

The main reason for this, apart from the continuation in the main theme, is the reappearance of perhaps the most fascinating character in Silence, the apostate Kichijiro.  He plays the role of Judas to Rodrigues’ Christ, and in Unzen we get a glimpse of his backstory as the novelist reads of his tearful attendance at the torture of those Christians who refused to renounce their beliefs – and were therefore scalded by hot springs for weeks, before being burned at the stake.

Throughout Silence, Rodrigues views Kichijiro with distaste, bordering on disgust, but despite his obvious cowardice, the Japanese apostate is a much deeper character than first appears.  His weakness is tempered by his inability to truly abandon his religion, and he finds himself continually drawn to his former friends, even following them on the road to their martyrdom, hoping to appease his conscience a little with offerings of food to the doomed Christians.  Indeed, it is also tempting to view his apostasy in a more positive light, seeing as he remains alive, yet still a believer.

Whatever you think of Kichijiro, he is somewhat of an enigma.  Is he a coward, a wise man, a traitor or a fool?  Or maybe all of the above?  Perhaps it’s best to avoid judgement and leave the last words to Kichijiro himself:

“The apostate endures a pain none of you can comprehend”