Skip to content
As promised in a previous post, July has been reserved for old friends, and my first three books for the month are all very familiar friends indeed.  Let me take you on a little trip through time and space, from the south of England to the north.  It’ll be a slow journey, but, I promise you, it will be well worth it…
***** 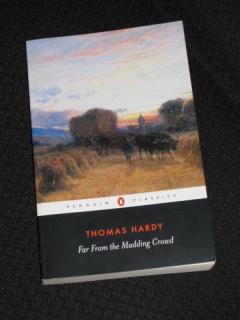 Our journey starts off down in Wessex, the ancient English kingdom appropriated by the wonderful Thomas Hardy as the setting for his Victorian novels.  Far From the Madding Crowd is a typically bucolic tale, describing a few years in the life of the young and beautiful Bathsheba Everdene.  This headstrong woman, who has decided to take on the running of her uncle’s farm alone after his death, is pursued by three very different men: surly Farmer Boldwood; dashing soldier Frank Troy; and the honest, reliable shepherd Gabriel Oak.  While this early novel has a little more cheer than Hardy’s later tragedies, there’s still a lot that goes wrong for Bathsheba, and plenty of obstacles to overcome before she can settle down in peace.

I first read this at secondary school – and got an almighty telling-off from my English teacher when I did a surprise test in class on the book without having bothered to read any of it (I think it was the question where I said Bathsheba was a farmer with a beard that gave things away…).  Now, I love this book, with its luscious descriptions of the English countryside and its long, leisurely conversations between locals in ramshackle pubs.  Admittedly, Hardy never uses a short word when he can dig up (or invent) a horribly long and complicated one instead, but this minor fault is far outweighed by his elegant storytelling – which is why, on finishing this novel, I went straight to the Book Depository and ordered three more of his works 🙂 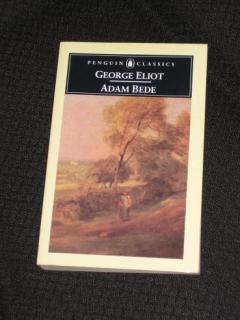 Now let’s (reluctantly) leave Wessex and move northwards, over the undulating southern hills, across the pleasant fields of Warwickshire, and onto the tranquil village of Hayslope in the (fictional) hilly county of Loamshire, for here we will encounter a fine example of the turn-of-the-(19th) century workman, Adam Bede.

George Eliot’s admirable carpenter is one of the principal figures of her first novel, and throughout its 540 pages, he must learn to use his broad shoulders to support others in their time of need – and to bear the crushing disappointment he encounters in his own affairs.  Adam, a cut above the average English country-dweller (both mentally and physically), is in love with Hetty Sorrel, a beautiful (and empty-headed) young dairymaid.  However, when the heir to the local estates, Arthur Donnithorne, sees the pretty girl, events take an unfortunate and fateful turn (reminiscent of a certain Hardy novel), tainting the lives of all involved.

This novel, which I bought at a second-hand shop while I was living in Japan (and read to death!), has many similarities with Far From the Madding Crowd, and I constantly compare and confuse Adam and Gabriel (in my mind, they both look like an actor I saw in an ITV production of Hardy’s novel!).  I’d have to say though that Eliot’s story is the better of the two.  It has all of the wonderful depiction of how people in the country really lived, with less of the stark contrast between the language of the story and the philosophising.  Middlemarch is probably a better book, but Adam Bede is definitely my favourite Eliot novel.

Alas, we must keep moving, and the way is becoming less pleasant now.  We pass through the bare, coal-stained hills of Eliot’s Stonyshire, skirt the big industrial cities of the north, and venture out onto the wet, wild and windy Yorkshire moors – until we stumble, on completion of our journey, upon a pair of houses isolated on the moors: Thrushcross Grange and Wuthering Heights…

The novel is actually a story within a story (within a story) as a large part of the tale is told third-(and occasionally fourth-) hand by the feisty, and perhaps not all that trustworthy, maidservant Nelly Dean.  Through her long fireside stories to the convalescing tenant of Thrushcross Grange, Mr. Lockwood, we learn about the strange events that unfolded in recent years.  All begins when Hareton Earnshaw, the owner of Wuthering Heights, returns from a trip to Liverpool bearing a rather unwelcome sort of gift – a dirty, dark stray who soon comes to be known by the name of Heathcliff.  While Earnshaw’s two children are initially repulsed by the intruder, his daughter, Cathy, quickly becomes the best of friends with Heathcliff, a tie which will endure lifelong… and perhaps beyond.

Emily Brontë’s classic story is nothing if not divisive (as recent Twitter conversations have shown!), but I love this book.  Melodramatic?  Definitely.  Exaggerated?  Of course.  Stretching reality of behaviour to its limits?  Without doubt.  That’s not the point though.  In the self-centred and slightly deranged Cathy, Brontë created one of the most fascinating heroines of the Victorian age (with the best theme tune too!), and as for Heathcliff… well, any character who bangs his head against a tree until it’s covered in blood has to be worth engaging with.

This was probably the first piece of serious literature that I ever read (voluntarily anyway), back in those wonderful days when Penguin brought out their one-pound popular classics and widened general access to the literary greats.  I still remember struggling through the book, all the time trying to work out who Cathy/Catherine/Linton/Hareton actually was.  By the end of the novel, despite this difficulty, I was hooked on reading ‘proper’ books 🙂

*****
Alas, we must now turn our backs on the world of fiction; our time here is done.  And so, with our journey at an end, it’s time to leave 19th-century England behind and return to the realities of 21st-century Melbourne: a large amount of planning to do for next term, a mountain of bills to pay and two noisy (but lovely) daughters to pay attention to.

7 thoughts on “A Journey Through Rural England”