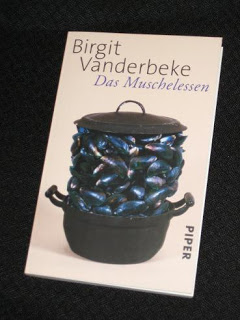 January in Japan, having taken up a whole month of my reading time, is finally over, so it’s time to return to a more varied literary diet for a while.  And talking of food, the first Peirene of the year is particularly mouthwatering – and also a very good book…

*****
Birgit Vanderbeke’s Das Muschelessen (English version translated by Jamie Bulloch) is a short modern classic very much in the vein of Peirene’s offerings so far.  A family sits at home waiting for the father to return from a business trip.  A pot of mussels (his favourite food) is there ready on the table to celebrate the promotion he has been expecting.  However, he appears to be late, unexpectedly so – this is not a family where surprises are common…

The other three members of the family (mother, daughter and son) grow impatient and start to talk – and it becomes clear that this is not a happy family.  Stories unfold,  grievances are aired, hearts are poured out, and soon we realise that they’d be happy if the man of the house never came home at all…

Das Muschelessen is another excellent choice, a work which is surprisingly powerful and layered for its size.  One one level it is a character study of a dysfunctional, cowering family, victims of traditional, patriarchal, German society (where a woman’s place is firmly proscribed and the man of the family is to obeyed at all times).  At first, it is tempting to think that they’re exaggerating and a little unfair; certainly, without prior knowledge of the family’s history, the initial reactions seem a little overdone.  Eventually, though, as the father’s personality (and cruelty) is revealed, the reader is certain to take the side of the oppressed.

Vanderbeke sketches out an environment of gender stereotypes and a home ruled by fear.  The mother is described as changing roles and faces as required, subordinating her own will to pander to the father’s twisted idea of a ‘richtige Familie’ (real family):

“In real families rules are not necessary, my father always said, and in truth they weren’t needed because we always understood each other, and if I was occasionally a little defiant and said, no way, it started all over again, and it went on until, in answer to his question, do you understand, I hastened to say, yes, I do…”***

Just as in any dictatorship, dissent is frowned upon and is stamped out as quickly as possible in particularly nasty ways…

On another level though, Vanderbeke is using a family setting to criticise something much wider.  Das Muschelessen was written in 1990, but set just before the events known in German as ‘die Wende’ (which Peirene followers may be interested to know translates as ‘turning point’…), and even though the nameless protagonists have settled in the west, the book is an indictment of East German society.  The father is a head of state, demanding complete loyalty from his subjects; that he is able to achieve it is due to the same methods used in the DDR.

If there was solidarity between the other members of the family, then the father’s castle in the air would soon come tumbling to earth.  However, just as in ‘real life’, the rest of the family are unable to resist the temptation to seek favour:

“…my mother went shhh because she was afraid he might hear us, even though he wasn’t even there, but that’s how it was in our house, everyone thought he knows everything and hears everything and sees everything, although we knew that this was impossible, and he actually did find out a lot, because we all told on each other…”***

Tonight is very different though – the longer the father’s arrival is delayed, the more unwilling the rest of the family is to put up with living in fear.

While the book fits nicely into Peirene’s collection with its content and length, its style is also reminiscent of its stable-mates.  The book consists of one unbroken paragraph, with a few long sentences, broken up into waves of short clauses.  The effect of this style (reminiscent of Portrait of the Mother as a Young Woman) is to produce a sense of urgency and intensity.  At times, the first-person narrative can slip almost into stream-of-consciousness mode, but this just makes the description of the father’s violence even more abrupt and stunning when it comes.

In terms of content though, Das Muschelessen is more similar to Next World Novella.  Both works deal with the unravelling of a lie, the unmasking of a tyrant, in a way over which he has no control.  I would talk about character assassination, but that suggests that the accusations are unfair and ungrounded.  Although we are reliant on our narrator, there is little doubt that it is high time for the domestic regime to be overthrown.

This year’s Peirene collection has been entitled ‘The Turning Point: Revolutionary Moments’, and it is easy to see how Das Muschelessen fits in with this motto.  It is a work which shows that the smallest turning point can prove to be the catalyst for changes which were previously unthinkable.  It all makes for a book which can quite rightly claim to be labelled a modern classic – it is taught in German schools, and rightly so.

All in all, it looks like 2013 is shaping up to be another good year for the nymph 😉

*****
***All translations are my sorry efforts, and not those of the Peirene version 😉

13 thoughts on “‘The Mussel Feast’ by Birgit Vanderbeke (Review)”