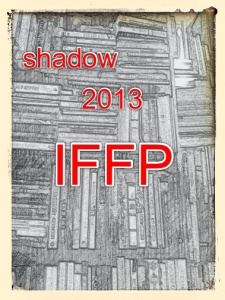 If there’s one thing that’s inevitable about a European-dominated IFFP longlist, it’s that you’ll come across a few World War Two books sooner or later.  Today we’re on a trip to Prague for the first of this year’s batch, a story about a man whose ambition may have outstripped his abilities.

And that’s just the writer…

*****
HHhH by Laurent Binet (translated by Sam Taylor – from Harvill Secker)
What’s it all about?
A French writer obsessed with the Czech Republic decides to produce a novel about the events of a WW2 assassination attempt.  Reinhard Heydrich, Himmler’s right-hand man, has turned Prague into his own private police state, a model for other German ‘provinces’.  Needing to show the British that they are pulling their weight, the Czech government-in-exile in London decides to strike a blow and sends in two parachutists (Slovak Jozef Gabčik and Czech Jan Kubiš) to bring down the ‘Blond Beast’.

The subject matter is fascinating, and the story (on the periphery of major WW2 events) is an enthralling one.  In addition to the depiction of a major villain I’d never even heard of, HHhH explains the background of the German march into Central Europe, including the animosity between the Czechs and Slovaks which may have made it possible in the first place.  If you are going to write about the war, looking at a relatively unknown aspect of it is a good way to go about it.

Despite the inherent interest of the story though, Binet is just as interested in telling us about his story, the writing of HHhH.  The novel is written in a detached manner, with the writer constantly interrupting, and commenting on, the action he is attempting to describe.  The novel is written in over 250 short chapters, many lasting less than a page, and it comes across as less a novel than an experiment in historical fiction, one which (as the writer seems to feel) is always doomed to failure.

The story is told with liberal doses of sarcasm and black humour, which works fairly well.  Some of the information given is so bleak that perhaps this humour is the only possible way of dealing with it: 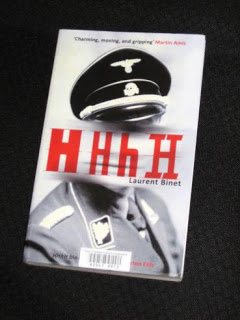 The writer also frequently reminds us that Heydrich (like Hitler before him) could never be accused of deception.  He gave everyone fair warning and told them exactly what he was going to do…

Having said that though, I did find myself questioning Binet’s slant.  This is meta-fiction at its most intrusive (and annoying), and it made it difficult to really get into the book.  The lack of page numbers seemed simply gimmicky, and the writer deliberately plays with the reader, constantly contradicting and correcting himself.  In fact, he often makes up information he doesn’t know:

Natacha reads the chapter I’ve just written.  When she reaches the second sentence, she exclaims: “What do you mean, ‘The blood rises to his cheeks and he feels his brain swell inside his skull’?  You’re making it up!”
(Section 107)

When he (the writer narrator) is obviously making things up, how can we trust him?  And why should we?

HHhH is an interesting book, but for me the interest is mainly due to the events Binet is describing, not his literary messings around.  At times, the digressions and musings are simply frustrating, preventing the reader from making a connection with the story.  Ironically, once we get to the main action of the novel, the one point where the story takes over, it is all a bit of a let down.  I suspect that the earlier messing around was disguising the fact that there’s nothing particularly appealing about Binet’s writing.

The narrator has a habit of namedropping, and (amongst others) Flaubert, Borges and Kundera are mentioned in the text.  Kundera actually appears on the very first page:

” In The Book of Laughter and Forgetting, Milan Kundera implies that he feels a bit ashamed at having to name his characters.  And although this shame is hardly perceptible in his novels, which are full of Tomášes, Tominas, and Terezas, we can intuit the obvious meaning: what could be more vulgar than to arbitrarily give – from a childish desire for verisimilitude or, at best, mere convenience – an invented name to an invented character?  In my opinion, Kundera should have gone further: what could be more vulgar than an invented character?” (Section 1)

As well as hinting at what direction HHhH will take, the writer appears to be introducing the kind of company he would like to be placed in.  He’s talking the talk, but I’m not sure that he’s walking the walk…

A little explanation of the title to finish.  HHhH stands for ‘Himmlers Hirn heißt Heydrich’ (‘Himmler’s brain is called Heydrich’), and I always struggled to think of how to actually say it.  Until, that is, I realised that if the abbreviation comes from German, it should be pronounced in the German fashion…

Do you think it deserves to make the shortlist?
What do you think?

Seriously, I’m not saying that this is bad – it’s an interesting read, and Binet does get it right in places.  It’s just that a lot of the interest comes from the subject matter and not the way the writer handles it.  Of the ten longlisted works I’ve read so far, this one is my least favourite.  It’s not bad, just not good enough.

Will it make the shortlist?
Possibly.  There are lots of conflicting opinions on this one, but it’s a big-name book that has its champions.  I haven’t read the other WW2-era books yet (Trieste, The Fall of the Stone City), but I suspect that at least one of them will make the shortlist.  I doubt HHhH will win the prize, but it’s another book which will look good on paper for the shortlist…

*****
Leaving Prague behind, we head off to Turkey next – for a book three decades in the translating.  See you there 😉