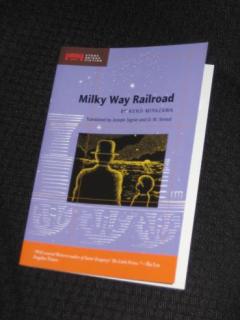 Bellezza’s theme for June in the Japanese Literature Challenge 7 was children’s literature – and it’s one which is not exactly my preferred genre (to say the least).  However, as luck would have it, I did happen to have a Japanese children’s classic hanging around on my J-Lit shelves, one which will be very familiar to any Japanese readers out there – and it all takes place up in the Milky Way…

*****
Kenji Miyazawa’s Milky Way Railroad (translated by Joseph Sigrist and D.M. Stroud, published by Stone Bridge Press) was originally written around 1927, and it‘s a fantasy tale about a boy and a rather unusual train.  One night, on the Japanese celebration of Tanabata, Giovanni walks down to the village in search of the milk which was not delivered that day.  Forced to wait, he wanders up to the top of the hill, when suddenly:

“Giovanni heard a strange voice calling, “Milky Way Station!  Milky Way Station!”  All at once everything before his eyes was illuminated, as if a billion fireflies had been fixed in one perpetual flash and inlaid in the sky.”
pp.47/8 (2009, Stone Bridge Press)

The next thing Giovanni knows, he is seated in a train, speeding through the night with his best friend, Campanella.  This is no ordinary train though – instead of riding the rails, the two boys are actually traversing the Milky Way…  How is this possible?  And why has Campanella suddenly appeared to join in Giovanni’s journey?  All will be revealed in good time…

First things first.  Milky Way Railroad is a children’s book, and if you don’t approach it as such, you will be sorely disappointed.  Although my copy is 143-pages long, I read the whole thing in about half an hour, and I suspect most readers would be able to do the same.  The language is fairly simple, and the story is a straight-forward narrative in which the two friends ride the train until it is time for one of them to get off.  Anyone expecting the brilliance of Kawabata or Oe is both misguided and likely to be disappointed 😉

Which is not to say that there isn’t more to the story than first meets the eye.  Miyazawa was a schoolteacher (hence the children’s fiction), but he was also deeply interested in religion, particularly Buddhism and Christianity, and Milky Way Railroad is, in part, an attempt to reconcile different belief structures.  The travellers actually visit Heaven (well, Northern Cross Station which apparently services it!), and the Italian names given to the two main characters contrast nicely with the Japanese names borne by the obviously western children who get on the train at a later stop.

If you’re suspicious of how much I seem to have got from flicking through a kids’ book about magic trains, you’re right to be.  Most of my insights come from the excellent introduction which D.M. Stroud, who updated Joseph Sigrist’s original translation, wrote for this edition.  The translator does a great job of explaining the background of the Tanabata festival and the author’s religious and scientific beliefs – in fact, were it not for major plot twists being discussed, this would be very helpful to read before starting the book itself 🙂

If Milky Way Railroad sounds like something you (or your kid!) would enjoy, then I’d recommend it – just remember that it is a book for children.  Even so, there is a lot to like about it – and plenty of wise words to remember:

“And everyone is Campanella.  Everyone you meet Giovanni – every time you ride on a train –  everyone you ride with and eat apples with.  So it’s just as you were thinking before.  Take every opportunity to look for the greatest happiness of all people, and quickly join them on their way.” (p.129)

Life is a journey, and you’ll meet plenty of people along the way.  Most of them will get on and off at different stations to you; the important thing is to laugh and have fun while you’re riding the rails together…