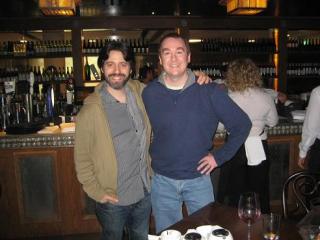 As I mentioned a while back (and as regular readers would no doubt have already guessed), my main reason for attending the Melbourne Writers Festival for the first time this year was to see the session entitled Traveller of the Century, in which Argentine-Spanish writer Andrés Neuman discussed his award-winning novel.  A word of warning before we start: don’t rely on me to be too objective with this one.  Most of the following was written whilst wearing rose-tinted spectacles 😉

*****
As with the Laurent Binet session, the interviewer was Radio National’s Michael Cathcart, and the show was once again planned to be aired on radio.  Thankfully, it wasn’t live this time…  We were back at ACMI, this time in a more intimate studio, and around seventy to eighty people were crammed into the rows of sofa-type seats (not great on my back, unfortunately).

From the very start, Neuman showed himself to be erudite, witty and fluent in English, able to keep the conversation rolling along in a way that Binet perhaps couldn’t quite master earlier in the day.  After a brief discussion of the writer’s roots (having left Argentina before high school, he said: “I feel half Latin-American and half European.”), Cathcart quickly brought the discussion around to the book itself, one which revolves on the idea of identity, both personal and national.

Cathcart mentioned the setting for the story, the shifting town of Wandernburg, and Neuman explained how this invented place was following in the footsteps of such great writers as Calvino, Borges and García Marquez, all of whom used imaginary towns as the settings for their philosophical experiments.  Wandernburg’s location, on the border of two powerful neighbours in a time of constant regional conflicts, means that the town frequently changes hands, forcing its inhabitants to master the art of swapping allegiances at the drop of a hat.  This is important when the focus of the novel moves on to the idea of the nation state and national characteristics, as the idea of ‘typical Germans’ makes no sense when there is no real Germany to shape the people.

A topic which appeared early in the conversation, reappearing towards the end, was the sex in the novel, which (as Cathcart rightly pointed out) only comes after a 300-page flirtation.  Neuman explained how readers today are unlikely to be shocked by sex scenes, and the way he decided to get around the readers’ jadedness was to lull them into a false sense of security.  He did this by making the ‘courtship’ resemble something from Austen, before suddenly allowing Hans and Sophie to give in to their more physical instincts (in a rather un-Austenesque manner…).

Sophie is one of the more interesting characters in the book, and when Cathcart mentioned ‘the beautiful Sophie’, Neuman interrupted, asking why he thought she was beautiful – it’s never really explicitly stated in the novel.  While most readers (yours truly included!) would have an image of a beautiful young woman in mind, the writer never describes her as such, instead allowing her intelligence and charisma to persuade the reader that she is beautiful.  In fact, in the scene where she is shown naked for the first time, Neuman goes out of his way to show the reader that she is not a flawless goddess, but a normal woman…

Another point Cathcart (who I suspect really loved this book) noted was that there were a couple of striking parallels in the novel, which Neuman was happy to agree with.  While Rudi Wilderhaus (Sophie’s fiancé) is Hans’ rival in love, Professor Mietter, the dogmatic centre of the literary salon, is just as much a rival, but an intellectual one.  And as we’re mentioning the literary salon at the Gottlieb residence, what are the gatherings at the cave with the organ grinder and friends if not another kind of salon?

One of the most fascinating stories came from Neuman himself though when he revealed that the basis for the whole story lies with… Franz the dog!  As the audience looked on expectantly, the writer explained how the inspiration for the novel came from Franz Schubert’s Winterreise, a song cycle with lyrics provided by poet Wilhelm Müller.  In the last of the twenty-four songs, the traveller comes across an organ grinder playing alone, with only dogs for an audience, and the traveller decides to throw in his lot with the old man.  And there you have a large part of what makes up Traveller of the Century…

I could go on all day, but I’ll just mention one last area of interest.  Neuman has a background in translation himself, and he was naturally very enthusiastic about the process of having his work appear in the English language.  He worked hard with the two translators (Nick Caistor and Lorenza Garcia) and credits them with the success of the English-language version saying: “What you’re reading is the translators’ prose.” and “It’s an original creation, based on the original.”  For anyone familiar with the discussion about BBC Radio’s recent Front Row programme on literary translation, those are heartening comments indeed 🙂

*****
At the top of the review, I warned you all that my objectivity was ever-so-slightly compromised today, and there’s a very good reason for that.  Not only have I now read the book twice (and loved it both times), I’ve also been in contact with Andrés on Twitter, and before the festival, we agreed to try to catch up when I came to his event.

I thought we might just snatch five minutes to chat, or perhaps sit down for a while over coffee; instead, once Andrés’ signing duties had been fulfilled, I went with him and his lovely wife to a café and chatted for a couple of hours (which simply flew by!) about life, books and travel.  While I, naturally, was very interested in his work, he and his wife also praised my blog scribblings…  I’m happy when anybody deigns to take a look at my posts, so to have two such intelligent and erudite people appreciate what I do…

…well, let’s just say that for this post, objectivity has flown out of the window 🙂

4 thoughts on “Tony at the Melbourne Writers Festival (Part Three)”