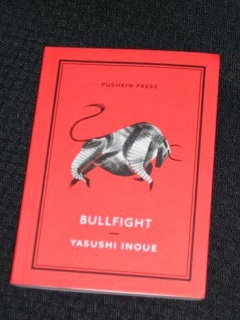 You’d think that three Ryu Murakami reissues and a new translation into English would be enough Japanese books for a publisher for one year, but Pushkin Press have decided to take a further step in 2013 with their foray into J-Lit.  The latest book to appear is a classic novella, one which looks at life in post-war Japan, with particular reference to newspapers and bulls…

*****
Yasushi Inoue’s Bullfight (new translation by Michael Emmerich, review copy courtesy of the publisher) is set in Osaka between December 1946 and January 1947.  Tsugami, editor-in-chief of the Osaka New Evening Post, is a successful man, a journalist who has worked his way up to an important position.  However, he feels that there’s something missing in his life and longs to make a big coup.  It’s at this point that Tashiro, a rather shady character, approaches him and makes an unorthodox proposal – why not organise a bullfight, here, in Osaka?

What at first glance seems a stupid idea quickly becomes more attractive.  In the rubble of post-war Japan, people are desperate for entertainment, especially if they can gamble on it:

“Betting, he was thinking, yes, this could work.  Everyone would put money on the bulls – it would be no different here in the urban Hanshin region than it was in W.  In these postwar days, perhaps this was just the sort of thing the Japanese needed if they were going to keep struggling through their lives.”
p.19 (Pushkin Press, 2013)

Tsugami quickly decides to support the venture and begins drumming up support at the newspaper.  The event, featuring twenty-two snorting beasts transported north from Shikoku, will take place in January at the famous Hanshin (Koshien) baseball stadium.  He’ll build it – but will they come?

Bullfight is an absorbing little book, 120 pages that slip by in no time.  The focus is squarely on Tsugami, a man who has found the challenge he’s been looking for in the form of the unique event.  Although already a success, he desperately wants to do something to make his mark, and he commits himself to the project despite the obvious risk involved.  The paper, which backs his proposal, is a daring, satirical publication:

“…a paper for the slightly unsavoury intellectual…” (p.23)

Even though he’s a clever fellow, he’s out of his depth here.  Costs mount up and the people he deals with are far more cunning than he.  He has to deal with the slimy Tashiro, a wheeler-dealer if ever there was one, and businessman Okabe, a drunkard who offers help while using Tsugami’s event for his own gain.  The excrement the bulls produce is far from being the only bullshit around here…

While focused on Tsugami though, Bullfight is also the story of post-war Japan.  Osaka is full of bombed buildings, but these are exciting times, and there are plenty of opportunities to make money if you know how – and have the nerve.  Life is beginning to return to normal, with baseball back in full swing and the New Year’s bells ringing in Kyoto for the first time in years.  This bullfight is just another exciting venture to thrill the masses.

Over the course of the novel, Inoue slowly reveals Tsugami’s character.  While he is initially calm, calculating and rational, a gambling streak swiftly rises to the surface.  What the reader sees is a man unable to hedge his bets, even when the chance arises (and he has several opportunities to walk away and cut his losses…).  He’s simply not the kind of man to share the risks – for Tsugami, it’s all or nothing…

The only one who sees this is his girlfriend Sakiko (Tsugami does have a wife and kids, but – in true Japanese fashion – they are safely elsewhere…).  Locked in a stagnant relationship for years, she wants to leave him but never quite can.  She alone knows the fever that burns inside him, and realises that this opportunity is what he’s been waiting for all this time:

“They sat for a long time, saying nothing.  It was a peculiarly quiet moment, unlike any Sakiko had experienced in all the years she and Tsugami had been together.  The face of this man, liberated now from his work, as if some possessing spirit had lost its hold on him, looked oddly plain and docile.  Oh, look at him – that helpless face, she thought.  And suddenly, like water spreading through her, she felt something that was neither love nor hatred, but a sense of how truly lost he would be without her.  It was a pure feeling, far removed from desire.  Again and again, endlessly, the bells rang.” (pp.51/2)

Sakiko realises that the bullfight is a make-or-break event, for both of them.  But which will it be?

Bullfight is a wonderful story, a very readable tale with a serious moral beneath the surface.  On one level, it’s a cautionary tale of one man’s tragic flaw, but on another it takes a look at the state of the nation, one which some think is on the up, but others would argue is on a steep moral decline.  The decision to have the book retranslated by Emmerich is a good one – it’s a very smooth translation, making the novella even more enjoyable to read.  Entertaining, with a typically-Japanese open ending, reading Inoue’s book is simply a great way to spend a couple of hours – and that’s no bull 😉