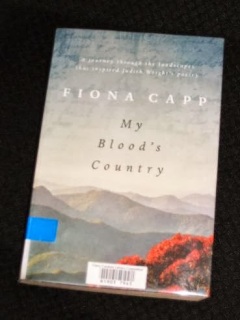 It’s time for the last of my Christmas Humbook books, the second of Lisa’s choices – and it was left to last for a reason.  Firstly, it’s a biography (I don’t read many of them); secondly, it’s a biography of a poet (I’m not much of a fan of poetry); thirdly, it discusses a poet I’d never heard of…

Hmm, long odds here.  So, what will I make of this one?

*****
My Blood’s Country is an attempt by writer and journalist Fiona Capp to follow in the footsteps of poet and activist Judith Wright, a very well-known Australian (well, to anyone born here, anyway!).  Capp met Wright for the first time when the older poet came to talk to her school, and she has been obsessed with her work ever since, also keeping up a relationship through letters and occasional visits.

After Wright’s death, Capp goes on a pilgrimage of sorts, visiting the three main areas where Wright spent her life in the hope of understanding the effect the environment played on the poetry.  There is another motive however.  She is also half-hoping to see traces of Wright herself in the places she visits…

My Blood’s Country isn’t a biography as such; it’s really more of a travel book.  Capp takes the reader on a trip to the New England plains in New South Wales, Mount Tambourine in Queensland and Mongarlowe, away in the Canberra Hinterland.  By seeing where Wright lived, we (hopefully) will understand her poetry more and also gain an insight into some of her other passions.

While it’s not a biography though, we do get a fair bit of information about the poet’s life.  Wright comes from a famous farming family in New England, one which owned vast tracts of land, and her grandmother May, the Wright matriarch, shrewdly made the family’s fortune with her sound management of the estates.

Judith Wright was initially proud of her background, but in later life she began to turn away from this view.  She started to see the darker side of the family’s fortunes, and as a woman (in a family which became ironically patriarchal) she was never going to inherit the land.  In fact, she was destined to lose it completely as one of her brothers overextended and had to sell up, information which had Capp musing:

“The irony, I couldn’t help thinking as I wandered the garden at Wallamumbi, was that her exclusion from ownership of the property and the inevitable sense of exile this bred was what had made her a poet.  As is often the case with those whose great achievement is to transform their personal suffering or pain into a work of art, her loss was our gain.”
p.47 (Allen & Unwin, 2012)

The loss of Wright’s childhood home was a double-edged sword – a sad affair, but one which helped make her the poet she was…

Wright also began to realise the role her family had played in the displacement of the local Indigenous people, with her parents’ wealth coming at the expense of the traditional way of life.  When her father reveals the story behind the name of a rock called ‘Darkies’ Point’, she is horrified, and this shock and anger helps propel her into her later career as an activist for reform.

It’s the environment though which seemed to be Wright’s major love.  Capp concentrates on the natural features of the places the poet lived, and each of three main homes showcases a different feature of Australian nature.  There are beautiful descriptions of the tablelands, the subtropics and the bush, and Capp learns from Wright of the importance of native plants.

Moving away from Wright though, My Blood’s Country is just as much about Capp herself as it is about her subject.  This is, in part, her story, an attempt to understand the woman she regarded as a mentor and a friend.  Wright imparted her first advice when Capp was a schoolgirl – in a polite letter:

“I think one of the best disciplines I know of, for young Australians brought up on a diet of English poetry, is to study Chinese and Japanese poems – if not in the original, which you probably never will be able to, then in the best translations you can get.  Their kind of aesthetic, which is a bad word for something important, is much sterner and less sloppy than ours, and it does anyone good to try to pare down words to essentials and to see things clearly.” (p.5)

The stripped-back style of Japanese and Chinese poetry obviously had its appeal for Wright at that period of her life, and Capp comments that it is typical for her stark, simple writing.

Capp’s hope of retracing Wright’s steps in order to better understand her, to somehow reencounter her, are doomed to failure though.  Nothing remains of the past, and the quest becomes an impossible, elusive journey.  The younger writer is disappointed by how the reality differs from the images (gleaned from poems) in her head…

My Blood’s Country is an interesting read, even if it’s a little confused in its focus.  What is it meant to be?  Is it a biography, a travel book or a story of self-discovery?  It’s enjoyable enough, but I suspect that it would be a lot more so if you had heard of the writer before reading it.  Lisa hinted that finishing this book would leave me wanting to try Wright’s poems – I’m not so convinced, but you never know…

Before I leave you though, there was one coincidental connection I discovered while reading the book.  Wright’s daughter, Meredith McKinney, is a renowned translator of Japanese literature, having brought several classics into English, including… Natsume Soseki’s Kusamakura.  And?  Well, I’m a big fan of his (I reread this book very recently), and this was one of my return Humbook choices!

4 thoughts on “‘My Blood’s Country’ by Fiona Capp (Review)”