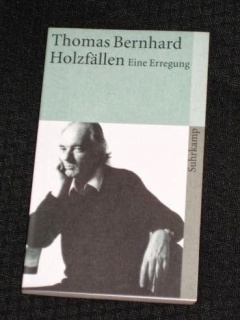 German Literature Month rolls on, and so too does the bus, taking us to the next stop on our literary travels.  Today we’re off to Vienna, where we’re expected at a dinner party, or rather “an artistic supper”.  The hosts, and the guests, are friendly and welcoming – although, there is this one man…

*****
That man, of course, is the barely-concealed alter-ego of Austrian writer Thomas Bernhard, and the book is his novel Holzfällen (Woodcutters***).  It’s a deceptively rambling novel, a story that unfolds over more than three-hundred pages of circling vitriol from a man who despises the company he finds himself in.

The narrator is seated in a comfortable chair in a dark corner, having been invited by some old acquaintances to attend their:

This arty supper, ostensibly in honour of a famous stage actor, happens to coincide with a rather more sombre event, the funeral of a former friend.  Joana, a failed dancer and actress, hung herself in her home in the country, and the narrator (a thinly-veiled Bernhard) and the rest of the Viennese cultural milieu have paid their final respects before moving on to an evening of food and theatre chatter.

As we wait for the guest of honour to arrive, the narrator sits in his chair, scowling upon the other guests as they prattle on in the room across the hall.  Recently returned to Vienna after a long, self-imposed exile in London, he despises the empty-headed, vain, self-serving world of the Viennese literati and sits in judgement on them from his dark throne – and still we wait for the actor to arrive…

Holzfällen is my first view of Bernhard’s world, but it was pretty much everything I’d expected it to be from the reviews and comments I’d read.  The thirty pages or so that I read in the first sitting were a confronting, circular mass of sentences, deliberate repetition building into a dizzying wall of words seemingly intended to obscure meaning and prevent progress into the heart of the story.  Slowly though I began to make headway, and once I’d become more accustomed to the style, the story started to make sense.  Again and again, we return to the focal points of the story, the writer sitting in his chair, and the moment when he accepts the invitation from his former acquaintances, thus undoing the work of several decades of exile in a moment.

It’s a moment of weakness which he regrets, loathing as he does the cultural side of his former home:

“This horrendous city Vienna, I thought, which had plunged me deep into despair and, once again, into nothing but hopelessness…” (My translation)

It’s a city which attracts would-be artists and writers from the provinces, sucking them in, then chewing them up and spitting them out, broken, damaged.  As he muses:

“Vienna is a terrible Genius-destruction machine, I thought in the wing chair, a horrendous talent-destruction installation.”

The supper he has come to take part in, with its self-gratulating writers and alcoholic musicians is unlikely to soften him in his views.

The death of Joana, a woman he was once very close to, is the proof we are given of this terrible world.  Drawn to the metropolis at an early age, she becomes a part of the cultural community but never quite manages to make it, and when things go wrong, she is abandoned, only to be patronised and fondly remembered after her death.  The unfortunate, coincidental scheduling of the supper on the day of the funeral seems oddly apt – not even death stops the literary schmoozing…

The central image of the writer sitting and thinking in his ‘Ohrensessel’ (translated as ‘wing chair’ in the English version) is one of a tyrant sitting in judgement over the guilty.  From his dark corner, he can see the other guests in the brightly-lit room while they can only see an outline through the clouds of cigarette smoke, a vaguely-suspected image sitting silently and yet with a presence felt from a distance.  He casts down his unheard thunderbolts on the uneasy Viennese, punishing them mentally for their fakeness, their unceasing pursuit of public honours and, above all, for their ceaseless chatter.

However, the longer the novel goes on, the more the reader sees cracks appear in the writer’s facade and story.  The truth is that he is as guilty as all the others of using those around and above him to make his way to the top, financially and sexually, and if anyone is to be blamed for abandoning poor Joana, he would be right near the top of the list…

Holzfällen is a novel which takes some getting used to, but once you have caught the circular rhythm, it’s a joy to read, a hypnotic style of writing which, while appearing slightly random, is actually incredibly-tightly plotted.  This circular, repetitive motion, the structure of a single, gigantic paragraph, and the constant reminders that a story is being told (we are constantly torn back from a story by “…I thought…” and “…as I sat in the wing chair…”) are unmistakably Sebaldian.  Except, of course, that it is actually the other way round – in many ways Sebald is Bernhardian.  Having read a lot about the influence Sebald has had on writing over the past decade or two, it’s nice to see who influenced him 🙂

Of course, the question you probably won’t be are all asking is whether the actor actually ever arrives at the supper (and whether the writer ever makes it out of his comfy chair).  I’ll let you find that out for yourselves – you can’t expect me to tell you everything 😉  Rest assured though, the tone remains the same, and the writer retains his bitter demeanour for the whole of the novel.  And that’s something to enjoy…

*****
The English-language version (Woodcutters, translated by David McLintock) is available from Faber and Faber.