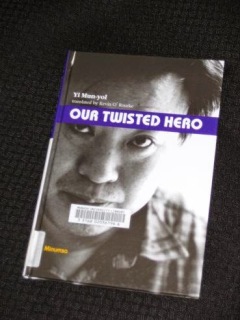 After my introduction to Yi Mun-yol a while back via some free online works, I was keen to move on to some more of his well-known books.  Luckily, I stumbled across one in the university library, a short book, but one which had been recommended by several people.  It’s a story which looks back to the narrator’s school days, but the reader always has the sense that there’s a lot more to it than that…

*****
Yi Mun-yol’s Our Twisted Hero (translated by Kevin O’Rourke, published by Hyperion East) is a short work, but one which is extremely powerful.  It begins with Han Pyongt’ae, an intelligent twelve-year-old from Seoul, moving to the provinces after his father is transferred at work:

“It’s been nearly thirty years already, but whenever I look back on that lonely, difficult fight, which continued from spring of that year through the fall, I become as desolate as I was at the time.”
p.5 (Hyperion East, 2001)

The cause for this depression is not so much the move as his experiences at his new school.  Where Pyongt’ae is used to a hierarchical structure based on academic excellence, things are very different outside the big city.  The teacher introduces him with a few mumbled words, leaving the new boy bewildered and struggling to find his feet.

Before long, though, he realises that the teacher is of minor importance in his new environment.  The true centre of power is the class monitor, Om Sokdae, an older student who holds the sixty students of the class in the palm of his hand.  Pyongt’ae, horrified at the despotic nature of Sokdae’s control, decides that he will stand up to the older boy, hoping to attract others to his side.  However, he soon discovers that power has a way of making others dance to its tune…

The strength of Our Twisted Hero is Sokdae, an imposing figure who towers above his younger classmates.  He is cunning and powerful and has used his talents to impose himself, creating his own unchallenged fiefdom within the walls of the classroom.  However, when Pyongt’ae attempts to stand up to him, he is careful to avoid using his fists to beat down the small newcomer – but why should he?  With five-dozen followers to take care of the dirty work, Sokdae doesn’t need to lift a finger…

You would expect that the teacher might be the one to stand up to the class monitor, but the reality is that he is content to use Sokdae to make his own life easier.  Interestingly enough, even Pyongt’ae realises that he may be onto something with this:

“The more I examined Sokdae the more clearly I saw that the teacher’s reasons for having to trust him were verified time after time.  Our class under Sokdae was a model for the whole school.  His fists were more effective than the perfunctory disciplinary control of any on-duty teacher or sixth grade prefect in keeping the boys from eating sweets or breaking any other petty school regulation.” (p.30)

When Pyongt’ae does try to alert him to what’s going on, the teacher is no match for the code of silence Sokdae has ingrained in his loyal followers, and it’s the outsider who comes off worst once again.

Of course, the main issue here is that while Sokdae’s rule is highly effective and productive, that doesn’t necessarily make it right.  The students are suffering under a mass delusion, believing that as long as they kowtow to the monitor their lives will be easier, whether or not that’s morally acceptable.  It’s a perfect example of ‘groupthink’, with the boys happy to bow to the status quo.  What they fail to realise is that every dictatorship, even Sokdae’s, has its expiry date…

While Our Twisted Hero is primarily the story of a brutal schoolyard, there is also an obvious allegorical use to the story.  The novella is discussing the world of violence and brutal political regimes in general, while also attempting a (slightly) hidden attack on the strict right-wing government of the South Korea of the time.  With a hostile Communist neighbour just over the border, South Korea experienced decades of autocratic rule, and it is this might-is-right tendency that Yi Mun-yol is criticising in his book.

The story is also rather Kafkaesque in the way it focuses on an outsider thrust into an unreasonable situation.  As much as Pyongt’ae struggles, he does it mainly within the status quo, accepting the existing structure by the very nature of his struggle.  Moreover, all too soon he is tempted to embrace the enemy:

“Although the end of the fight had been all too hollow and my submission all too simple, nonetheless the fruit of submission was sweet.” (p.70)

Here we move from Kafka to Orwell, with definite shades of 1984 in the temptation of enjoying the peace and the rewards of giving in.

Our Twisted Hero is an excellent book, a clever story, almost a single-sitting read yet thought-provoking and intriguing.  By the end, we find ourselves wondering just who is meant by the title – the enigmatic Sokdae or the rebellious Pyongt’ae (you could really make a case for either of them).  The reader, in their comfortable armchair, might find themself thinking that they would have acted differently, but the truth is that this is the way things nearly always go.  Even when they don’t, as Pyongt’ae and his classmates find out, matters don’t necessarily change for the better.  In reality, revolutions are often just a matter of exchanging one yoke for another…

2 thoughts on “‘Our Twisted Hero’ by Yi Mun-yol (Review)”