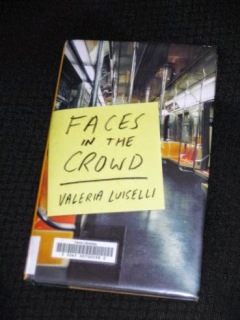 Some of you may be aware of Three Percent’s World Cup of Literature, which ran parallel to the FIFA shindig earlier this month, and it came as no surprise that Roberto Bolaño’s By Night in Chile was the eventual winner (the judging panel was stacked with Bolañistos…).  More surprising though was that the beaten finalist was Mexico, represented by a relatively unknown contemporary female writer.

What better way is there, then, to finish off Spanish-Language Literature Month in style while also ushering in the next big blogging event, Women in Translation Month, than giving this one a go?  None, that’s what.  Off we go to Mexico City, or perhaps New York?  Bear with me – it’s about to get a little confusing…

*****
Valeria Luiselli’s Faces in the Crowd (translated by Christina MacSweeney, published by Granta Books) starts off with a writer sitting at home in Mexico, jotting down memories of her younger days in New York in the few minutes she can snatch from her domestic duties.  It seems to be an ordinary, albeit interesting, story of a woman frustrated to be tied down by daily life when an artistic spirit is aching to be released, and as it is, it’s a great read.  However, this simple, alternating pattern of now and then soon develops into something more.

The catalyst for this is a chance discovery in a New York library which sets the younger narrator off on an obsessive hunt for traces of a dead Mexican poet.  As the interest in the elusive Gilberto Owen grows, he begins to have a voice of his own, and the voice of the present-day narrator also fractures, with extra strands added where events take a different turn.  By the end of the work, we’re no longer sure exactly whose voice is controlling the novel any more…

Faces in the Crowd is a wonderful piece of writing, elegant, poignant and light when it needs to be:

“I worked as a reader and translator in a small publishing house dedicated to rescuing ‘foreign gems’.  Nobody bought them, though, because in such an insular culture translation is treated with suspicion.”
p.1 (Granta Books, 2012)

Very true, as we’re all aware, but a good example of an odd bit of bite.  The book is actually many stories in one all jumbled up, intertwined but separate, and it’s up to the reader to both separate them and work out how they interconnect.

The initial focus is the writer looking back at her youth, focusing on regrets and memories from the vantage point of her older self.  She talks about her New York friends – Moby, the literary forger, Dakota, the singer, Pajarote, the student -, but we’re not sure how true it all is:

“All that has survived from that period are the echoes of certain conversations, a handful of recurrent ideas, poems I liked and read over and over until I had them off by heart.  Everything else is a later elaboration.  It’s not possible for my memories of that life to have more substance.  They are scaffolding, structures, empty houses.” (p.4)

The longer the novel goes on, the more we begin to doubt the stories we are told about the time in New York.  We’re told that a novel is being written, and there’s a sense that the writer’s ‘memories’ are just as fictional as her fiction.

We definitely can’t trust her (we’re not even that sure who ‘she’ is), and it soon becomes clear that we don’t even know whose story this really is.  While initially the woman relates events from the life of Gilberto Owen, a (real-life) Mexican poet who walked the streets of New York decades before the woman’s time there, later the tables are turned, and Owen appears to be seeing the women himself.  He gradually takes over the book, his ghost seeping through the pages, parallel lives threatening to overlap…

If there’s one idea that suffuses Faces in the Crowd, it’s that of ghosts – the novel is full of them.  The most obvious one is the spirit supposedly living in the writer’s house in Mexico (cleverly named ‘Without’), but the characters themselves fulfil the role of ghost for each other.  The title comes from seeing faces on the subway, in windows of passing trains, and everything has echoes of the past, resting places for ghosts – even if that’s not such a good thing:

“There’s nothing so ill-advised as attributing a metonymic value to inanimate things.  If you think the condition of a plant in a pot is a reflection of the condition of your soul, or worse, that of a loved one, you’ll be condemned to disillusion or perpetual paranoia.” (p.13)

Faces in the Crowd is an excellent piece of writing and a well-mapped out novel.  I wasn’t quite sure initially when the book took a turn towards Gilberto and away from the female narrator, but the complexity of the structure definitely added to the book, and I was convinced by the end of the story.  There’s beautiful, terse writing throughout, and I have to admit that I spent a lot of my first half-hour’s reading alternating between perusing pages, then noting down quotations 😉

In terms of influences and similarities, Luiselli’s book owes debts to several literary ghosts.  While the first third has several echoes of Virginia Woolf’s A Room of One’s Own, there’s also more than a hint of a more imaginative Knausgaard (albeit it in far fewer words!).  However, a book that also came to mind was Teju Cole’s Open City, especially in the way that Owen and the narrator unwittingly follow the same paths, leaving their own faint traces on the streets of New York.

Luiselli is a talent that doesn’t need to hide behind comparisons, though; I loved this one, and I already have Sidewalks on hold at the library.  While I’d heard of it before, I’m not aware of it having been up for any prizes, which is fairly surprising as this is a very good read.  I hereby prounounce Faces in the Crowd as the Costa Rica of The World Cup of Literature, the one story most neutrals will be taking out of it.  Hopefully, more people will now be aware of how good it is 🙂

*****
Christina MacSweeney’s translation was a good one, a major part of the book’s success, but I just picked up on one thing which may (or may not) have been an error in translation.  It has to do with a film the family were watching, ‘Raining Hamburgers’ – which is a literal translation of Lluvia de hamburguesas, the Latin-American title of a certain animated film, Cloudy with a Chance of Meatballs… I wonder if that was intentional?  If anyone can shed any light on this, please let me know 😉

10 thoughts on “‘Faces in the Crowd’ by Valeria Luiselli (Review)”