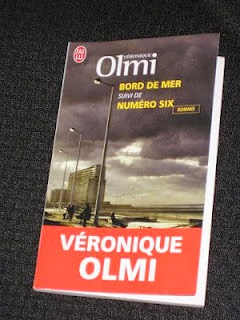 Looking back at my reading list recently, I noticed that the last few months have been totally devoid of any foreign-language reading – by which I mean reading books in a language other than English (reading books originally written in another language is a different story altogether).  While Women In Translation Month is all about promoting books others might like to read, I also felt it was time to stretch myself a little and try a couple which aren’t available in English yet.  Who know?  After reading my reviews, maybe someone will decide to bring them out in English at some point.

I wouldn’t hold my breath, though…

*****
Many readers will be aware of Véronique Olmi’s Beside the Sea (translated by Adriana Hunter), which was Peirene Press’ debut offering, but virtually none of her other works have made it into English thus far.  However, my French-language edition of Bord de Mer actually came with a companion story, the enigmatically-named Numéro Six (Number Six).  It’s no coincidence that the two works are bundled together.  As well as being Olmi’s first two published works of fiction, the stories complement each other nicely as they both look at parent-child relationships – just from differing viewpoints.

The story begins with a family on the beach, nicely lined up for a family picture, but this peaceful scene soon turns sour:

“The father tells them to keep still, to smile for the camera.  He looks into his Leica.  A few seconds, and then he raises his head again, troubled.  He looks at them all.  He counts them.  He counts them again.  His heart races.  The youngest, Fanny, isn’t in the photo.  Isn’t in the group.  Isn’t on the beach.” (***My Translation)

We then switch to the point of view of the missing child and wade into the ocean with her, waves breaking over us as we slowly make our way into deeper waters.  If only someone could come and save us…

Decades later, Fanny Delbast, the child in the water, picks up the tale of her life as she watches over her father.  She is now fifty years old, and her father, a former doctor and war hero, has just reached his century, an old man enjoying the quiet of his final years.  What seems like a perfect father-daughter relationship has a darker side, however.  Fanny, ‘numéro six’ in the Delbast family, is a woman who has craved her father’s attention all her life, and this book is the story of how she tried to get it – starting with her journey into the water.

One of the main themes Olmi looks at in Numéro Six is the fragile bond between a daughter who idolises, and idealises, her father and a man who doesn’t really notice her much at all.  Her decision to take on the responsibility for his care in his twilight years is anything but altruistic, even if her brothers and sisters see it this way.  With the mother who monopolised her father’s affection finally gone, it’s Fanny’s turn to sit by her father’s side:

“I put all my energy into finding this place.  I wanted you close to me.  Dependent on me.  What a relief for the others, they couldn’t believe it, they said that they’d pay, that price was no object, just as long as nothing got in the way of my research.
Nothing got in my way.” ***

As we travel through her early life, we see why she longs for her father’s affection so much.  An afterthought, a late, unexpected addition to a large Catholic family, she is less Fanny than numéro six, just a number, the last of the children.  Any trick she thinks of to draw her father’s attention seems to backfire, her efforts ignored or repulsed.  She even goes to the extreme of faking a debilitating illness in her childhood – one which renders her virtually bed bound for an entire year.

In truth, though, the more the story develops, the less Numéro Six is about the daughter and the more it becomes the story of the father.  While the man of the now is a hundred-year-old child waiting for his life to end, the narrator gradually shows us more of his roles.  He was a respected doctor, a feared family head, a loving young son and, perhaps most importantly, a soldier during the Great War, one of the sons of France who responded to the call to arms in 1914.

Learning about the war years through her father’s letters, the only things Fanny received from the carving up of her parents’ estate, she gains an insight into the emotions behind the paternal mask.  Much of her father’s behaviour in later years (his fierce love for his wife, his need for silence) can be explained by what happened during the war years, his dreams haunted by memories of life in the trenches and those who were left behind on Flanders’ fields.

For me, the lasting memory of the book is of the father, a man who fought for his country but suffered from the effects of the conflict for his whole life (it’s a book which is particularly poignant in the centenary of the outbreak of the First World War…).  Fanny is very clear about what she wants from life, needing her father close to her – there’s no room for anyone else:

Sadly, as much as she tries to claim her father for herself, she never quite gets there.  By the time her mother has left the scene, the man she has waited for her whole life is no longer really there any more…

Numéro Six is fairly short, even shorter than Bord de Mer, but it provides the reader with a lot to think about.  While I’ve focused more on the father, another review could easily concentrate on the daughter, looking at the dangers of her intense desire to appropriate her father’s love.  It’d be nice to think that it’ll make its way into English eventually (I actually preferred it to the earlier story), but I suspect that it’s unlikely to happen.  It’s an awkward length, too long for a short-story collection, and too short to be published as a stand-alone publication.  Still, if your French is up to it, it’s well worth a read – and if there’s any publisher out there who wants to prove me wrong… 😉