Once again, we’re back in Germany where (hopefully) we’ll be a little less exposed to radioactivity than in our previous location…  This is our fourth visit to the country on this IFFP journey, and it’s a slightly more relaxed trip than those we’ve experienced so far.  Our hosts today are three brothers, all very different men, but with some rather unusual connections.  Oh, and watch out for their father too – he’s a man who tends to pop up when you least expect it…

*****
F by Daniel Kehlmann – Quercus Books (translated by Carol Brown Janeway, review copy courtesy of the publisher)
What’s it all about?
Kehlmann’s novel starts off with a typically intriguing statement, one which sets the tone for the rest of the book:

“Years later, long since fully grown and each of them enmeshed in his own particular form of unhappiness, none of Arthur Friedland’s sons could recall whose idea it had actually been to go to the hypnotist that afternoon.”
p.3 (Quercus Books, 2014)

The outing Arthur takes with his three sons, twins Ivan and Eric and their half-brother Martin, turns out to be much more than just a pleasant way to spend the afternoon.  In its aftermath, he disappears, only to reemerge in the press as a successful writer, occasionally popping up to take his sons out for lunch at inopportune times.

Decades later, the three boys have grown up and have chosen rather different professions.  Martin, an overweight Rubik’s cube fanatic, is now a priest, albeit one without much belief in what he’s doing; Eric is a financial advisor to the rich, a man starting to sink into the mess he’s created for himself with his dodgy dealings; and Ivan, the most artistic of the three, has turned his talents to good, if corrupt, use.  However, as far apart as the men might appear, the truth of the matter is that you can’t choose your family – and they’re fairly difficult to escape, from too…

Kehlmann’s a writer I’ve been meaning to try for some time, so I was happy to see this on the longlist, and F is a novel most will enjoy.  It’s divided into several parts, the most important of which are the prologue (which chronicles Arthur’s disappearance and sets up the main part of the novel) and three main sections following each of the brothers.  As the story progresses, the reader is fed clues as to what is happening and each section explains some of the puzzling actions from the previous parts – which is not to say that everything is revealed.

One of the main ideas coming through in the novel is the necessity – and difficulty – of coming to grips with mediocrity.  As Ivan muses:

“What does it mean to be average – suddenly, the question became a constant one.  How do you live with that, why do you keep on going?  What kind of people bet everything on a single card, dedicate their lives to the creative act, undertake the risk of the one big bet, and then fail year after year to produce anything of significance?” (p.184)

While Arthur shot through and seemingly succeeded in his craft, his sons, all approaching middle age, are beginning to realise that their dreams, whether those involve fabulous wealth, eternal fame or Rubik’s success, are unlikely to ever come to fruition.  With that being the case, the brothers are forced to contemplate a life without excellence, an existence some will adapt to better than others.

There’s also the small matter of the link between the siblings, and that comes across most in the way that the twins, Eric and Ivan, are connected in ways even they don’t understand.  One of the major turning points of the novel is foreshadowed in earlier sections by seemingly trivial remarks and a simple slip-up which eventually turns out to be deadly.  That’s not the only family element, though – one short section in the middle has the writer trace the family’s history backwards through time, showing us the way in which the genes which make up the brothers got to the present day.  Which tells us – something…

You’ve probably noticed by now that I haven’t really got  a lot to say about F, and that’s no surprise.  It’s an enjoyable read, and very clever at times, but it felt rather superficial for the most part and not a book that is likely to stay in my head for long.  In fact, the description about Arthur’s novel rings just as true for Kehlmann’s:

“The opening sets up an old-fashioned novella about a young man embarking on his life.  All we know about his name is its first initial: F.  The sentences are well constructed, the narrative has a powerful flow, the reader would be enjoying the text were it not for a persistent feeling of somehow being mocked.” (p.56)

Yes, it’s all very clever – but once the joke’s worn off…

Another issue I had with F is that it’s one of those books which could have been set anywhere, 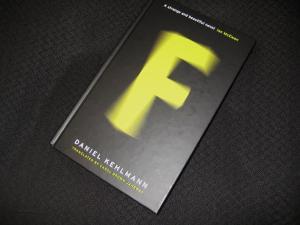 written by anyone.  If this had been published under the name of Martin Amis or Ian McEwan, I doubt anyone would have noticed, and while that’s fine in some ways, in others it’s a little disturbing.  I hope that this isn’t the future of international publishing, books which appear written to pander to the Anglo middle classes.  Perhaps I’m exaggerating a little here, but one thing I’m sure of is that it’s most definitely a Quercus book than a MacLehose one.

What I’ve written above is probably a little harsh; there’s little wrong with the book, and most readers will enjoy it.  Certainly, there are several worse works on the IFFP longlist (with one of those to be reviewed in the coming weeks…), and having the translator’s name (Carol Brown Janeway) prominently on the cover is something I have to applaud everyone involved for.  Let’s just say it wasn’t for me and move on 🙂

Did it deserve to make the shortlist?
No, I don’t think so.  It was an enjoyable read for the most part, but there was nothing outstanding about it.  Clever in places (a bit too clever in some aspects), F is a book which plays around a little too much.  Some readers will enjoy that, but I never really thought that it hit the heights I was expecting.

Why did it make the shortlist?
Smooth, easy-reading, nothing here to scare the horses.  Look, people – translated literature is just like the books you usually read!  Don’t believe all that stuff about ‘difficult’ prose and cultural impenetrability – Danny K. is just the man for you 🙂

*****
Let’s move on, then, leaving Germany behind once more (never fear – we’ll be back one more time before our voyage is done…).  It’s time to head south again, as we wind back the clock and visit an island off the Italian coast.  As different as the next stop is, though, there is something it has in common with today’s choice – it’s all about family…