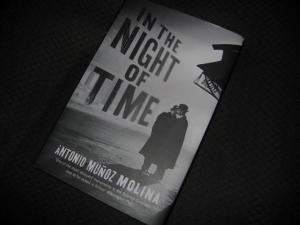 While there’s something to be said for a good novella, I have to admit that my preference has always been for something a little longer.  Many of my favourite books are lengthy tomes, novels which chew up whole weeks of reading time, and I rarely regret giving up the many hours it takes to work my way through the pages.  All of which will go some way towards explaining why, despite the looming pile of books on my shelves, when a parcel dropped through my letter box recently, I decided that the contents were worthy of being moved to the front of the queue.  Are you sitting comfortably?  Then let us begin – this might be a long one…

*****
The book in question was Antonio Muñoz Molina’s Spanish Civil War epic In the Night of Time (translated by Edith Grossman, review copy courtesy of Australian distributor Allen & Unwin), a weighty hardback clocking in at 640 pages of measured prose.  It begins with an unidentified narrator watching, or imagining, a man in a New York train station waiting room.  The man is Ignacio Abel, a successful architect who has come to the United States to design a library for a private university, and one aspect of the novel is his train journey to his new workplace and home.

However, there’s a lot more to the book than that.  This is 1936, and with the Spanish Civil War in full swing, Abel’s new job is less a chance to advance himself than an opportunity to escape from a volatile and unpredictable environment, one where death is just a knock on the door away.  As the tired refugee sits slumped in his train seat, he thinks back to the events of the past year, retracing the steps that have brought him this far.  It’s a story of politics and violence – oh, and passion too…

In the Night of Time is a wonderful read, a book for those who enjoy immersing themselves in lengthy, complex sagas.  The action takes place over the course of a year or so between 1935 and 1936, in a time and place which will be slightly less familiar to the average Anglophone reader than the more common World War Two fare we see so much of.  The story progresses slowly, but the writing is excellent, drawing the reader into Abel’s world, and the horrors of the war.

Much of the book is concerned with the architect’s relationship with Judith Biely, a younger American woman on her ‘grand tour’ of Europe.  Having found herself in Madrid, she falls for the imposing, handsome Ignacio, and he is only too happy to be distracted from his work and his humdrum marriage, leading a double life he never thought himself capable of:

“Now he was in the two worlds, two simultaneous times, yesterday afternoon with Judith and today with Adela and the children, in the dim light of the bar at the Florida and in the comfortable sun at the edge of the pond, smelling rockrose and thyme and resin, not divided but duplicated, ablaze with love and at the same time settled into the solid routine he’d constructed over the years, which that afternoon reached a kind of visual plenitude, like a completed painting, like the maturation of the last fruits of October, pomegranates and quince, yellow squash, persimmons, bursting golden grapes in the garden.”
p.157 (Tuskar Rock Press, 2015)

A wonderful situation to be in if you can manage it…  Sadly, Ignacio is not the kind of man who can sustain this fantasy for long, and these moments of happiness already contain the seed of the sadness which is to come.

As much as the love triangle dominates parts of the story, though, the impending troubles are inescapable, and the writer slowly builds up the tension.  The novel gradually introduces the prelude to the war, with political squabbles, violence in the street and the appearance of groups of eager young men dressed in similar shirts (but of different colours) just waiting for a reason to explode.

Abel, an important figure and a card-carrying union member and socialist, initially finds it hard to believe that war is on its way, burying himself in his work (and in Judith’s embraces…).  However, even in the bubble of Spain’s capital, the approaching disasters are unavoidable.  A former teacher of Abel’s appears, having been chased out of both Germany and the Soviet Union, and while the architect refuses to believe he could suffer the same fate, his old mentor knows better:

“You think there’s still time, don’t try to fool me, you hear what I say and think I’m exaggerating or beginning to lose my mind.  You feel safe because you’re in your city and your country and at heart you think that I and others like me belong to another species, another race.  But time’s running out my friend, it slips away from us more and more quickly, and from you too, from those like us…” (pp.240/1)

While Abel struggles to believe the professor’s words at the time, it isn’t long before he realises how prescient they were…

In the Night of Time is the story of an era, and the writer does his best to present as full a picture of the period as possible.  The book is full of wonderful descriptions of the city of Madrid, and it’s a story that certainly takes its time, unfolding with slow, careful, unhurried description.  While the technique of having Ignacio reminisce about the past during a train journey is somewhat reminiscent of Matthias Énard’s Zone, the writing is very different, its long, meandering sentences bringing another lengthy novel to mind, Peter Nádás’ Parallel Stories (albeit a touch less graphic when it comes to the bedroom scenes…).  Edith Grossman is one of the better-known translators around, and while I wasn’t impressed with her book on translation theory, this is a great example of how she’s very good indeed in practice 🙂

In the end, what you make of the book will depend on what you, as a reader, choose to take from it.  Is it a story of a passionate affair?  Is it a novel focusing on the start of the Spanish Civil War?  Does it merely detail the way a selfish man sacrifices his family for a few short months of pleasure?  In truth, it’s all of these and more, and it will reward anyone who is prepared to spend enough time in the writer’s world.  As I’ve already hinted at, though, it may take you a while to get to the end of Don Ignacio’s journey – don’t say I didn’t warn you 😉