Once again, the Independent Foreign Fiction Prize has taken us all around the literary world, but today sees our bookish journey come to its close, with one final stop before we rest.  We’re heading over to a small country in the west of Europe, and winding the clock back too.  This is a book about memories and love – oh, and the inescapable shadow of war too.  Lest we forget…

*****
While the Gods Were Sleeping by Erwin Mortier – Pushkin Press (translated by Paul Vincent, review copy courtesy of the publisher)
What’s it all about?
Helena, an elderly, bedridden woman, is looking back at her life, deciding to chronicle the events of her youth in a series of exercise books, texts which will be destroyed after her death.  The words come to her unbidden, images from her youth which demand to be committed to paper:

“I can’t really call them memories, as I do nothing, they catch me unawares – unless the nature of remembering changes with the years.  Sometimes, as I doze, the echo of my breathing in the room around me seems to awaken past acoustic impulses.  Rooms which had been piled wall against wall backstage in the wings of oblivion again enclose me.”
pp.13/4 (Pushkin Press, 2014)

Gradually, having explained why she’s writing, Helena takes the reader back to her youth, a time which would certainly take some forgetting.

Growing up in a comfortable, middle-class family, the young woman is only vaguely aware of the world outside (a world her older brother is much more at home in).  However, this world is changing, and Helena’s small corner of the globe is not immune to the unrest.  Finding herself trapped on the other side of the front line once the Great War begins, she realises that life is not how she’d imagined it – even if the arrival of an Englishman means that change is not always a bad thing…

While the Gods Were Sleeping is definitely one of my favourite discoveries of this year’s IFFP crop, a beautiful book and one which I throughly enjoyed slowly making my way through.  I’m loath to mention the P-word as it’s overused in reviews, but the focus on memory and the detailed, lengthy sentences mean (unfair) comparisons with a certain dead French writer are inevitable.  Mortier’s novel is certainly a book which examines events in detail, but there is a story, even if for some it might move a little too slowly.

Once we move past the frame of Helena’s twilight years, much of the focus is on her developing relationship with Matthew Herbert, an English war photographer and journalist.  This is her first real exposure to men, and the outside world, and the reader follows the development of their relationship, a courtship accelerated by the knowledge of what is happening a mere few miles away.

However, eventually the romance is intruded upon by the war, and the couple’s journeys to the front line allow us to see the devastation wrought by the fighting on the small nation (Belgium was the scene of much of the worst of the WWI conflict…).  As Helena and Matthew travel through old towns destroyed by bombs and mortars, houses loom out of the mist, shells devoid of glass – and inhabitants.  From a safer distance, the couple stand on a hill and look out over the conflict in the distance:

“The silence became still more oppressive.  There was no salvo or cannon shot to be heard, there was only that glow of lines of light, crooked needles above the landscape, and here and there the short-lived flash of what must be explosions, but without a boom or echo, and we looked at them as if at a natural phenomenon, as if down below on the plain the earth’s crust were tearing open and two pieces of land were grinding into each other or trying to separate.” (pp.128/9)

Away from the war, though, one of the main themes explored is the way in which the life of women of the time was limited.  Helena’s relationship with Matthew begins partly as a reaction against the constraints of her mother, and in her early years the daughter struggles to repress her anger  at the hypocrisy of her ‘captivity’.  While she is kept safely locked away, her brother is free to drink and mingle with the lower classes (and do a lot more besides…).

Her escape from this small world is into writing, especially poetry, but once again, her mother is not happy with her choice:

“For my mother, trains of argument and items of clothing were one and the same: they must button up tight, while I liked nothing better than lazing about in the hanging garden of Babylon in my open nightdress, proud of my blossoming curves, and climbing the ziggurats of books.  I surrendered myself to the cadence of silent speech that rose from their spines, the Styx of sentences, in which here and there, like driftwood or drowning people, words and images floated, which I more or less already understood, alongside much else that was not much more than shadowy stains in a dark flood.” (pp.18/19)

Nevertheless, Helena continues with her literary obsession, her need to write becoming a compulsion, one which continues right up to her final days in bed.  It’s not just about the writing either – Helena is just as fascinated by the texts of others, the words she reads helping to shape her own voice…

Mortier’s novel is an enjoyable read, with Vincent’s translation excellent for the most part.  The 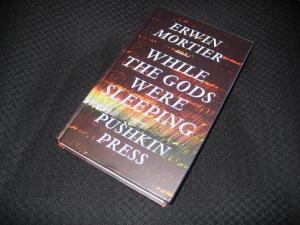 only point I didn’t feel fitted in was the dated slang used when Matthew was speaking (although it’s probable that this off-key language was used in the original to show how the Englishman’s French wasn’t quite as natural as it might be).  I certainly enjoyed the book, so I was very happy to learn that there’s more to come; apparently, While the Gods Were Sleeping is the first part of a trilogy, with the other two books seen through the eyes of different characters from the first part.  Those are books I’d be very happy to try – another excellent writer discovered on the IFFP journey 🙂

Did it deserve to make the shortlist?
Absolutely.  This was one of my top few, easily making it onto my personal shortlist, and it’s the one book I’m sorry didn’t make the Shadow shortlist.  Several of my fellow judges found it a little slow, and while I can see why they might think that, I’d disagree.  Taking time to unfold a story is a good thing, especially if the writing passes muster, and the language here is excellent 🙂

Why did it make the shortlist?
Because it’s an excellent book from a great small publisher.  Oh, and I suspect the setting helped too – with no WWII standouts this year, this was the next best thing 😉

*****
So, after fifteen stops on our lengthy journey, it’s time to take stock of what we’ve seen (and what we’ve read), to make sense of the images and words racing through our heads as we look to decide which of the titles deserves to take out the prize – or is it…

You see, one of the problems with travel is that you can never get enough, and just when you think you’ve reached the end of the road, another, more enticing path opens up, and the journey starts over again.  With our original trip ending in Belgium, it’s a mere step down to Paris, where a man is waiting to make his own final journey, a trip through the ages and the horrors contained in his mind.

Let’s get moving – we’ve got a train to catch…