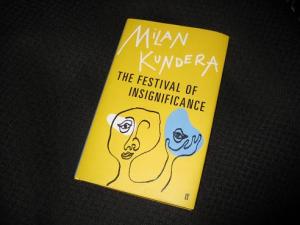 As a little-known blogger living far from the centres of the book world (focusing on a much neglected area of literature), I’m no stranger to the idea of insignificance.  It was a nice surprise, then, to see a copy of Milan Kundera’s latest book tumble into my letter box recently, proof that I haven’t been completely forgotten.  I was happy to receive the book for a number of reasons, but first and foremost was the fact that in years gone by I’d spent many a happy hour absorbed in the writer’s imaginary worlds.  The question today is whether his most recent festival of words is worthy of brushing shoulders with his other creations…

*****
The Festival of Insignificance (translated by Linda Asher, review copy courtesy of Australian distributor Allen & Unwin) is a novella set in Paris, a book which follows a group of men as they go about their comfortable, casual, mostly-bourgeois lives.  Alain, Charles, Ramon, Caliban and D’Ardelo go to parties, flirt with attractive women and, when they have a moment, reflect on their rapidly receding youth.

Meanwhile, somewhere in a semi-fictional Soviet Union, Stalin discusses philosophy with his bewildered Politburo, while the elderly, incontinent Kalinin looks around desperately for somewhere to ease both his mind and his bladder.  These events might seem out of place given the other strand of the story, but rest assured that the writer knows just how to bring the two worlds together – whether they belong together is another matter entirely…

The Festival of Insignificance joins a long list of Kundera’s mid- to late-career books in its foregrounding of an abstract concept, insignificance being added to traits such as slowness, ignorance and immortality.  Much of the story concerns the men portrayed here coming to grips with the prospect of their own insignificance.  They might be important in their own social circles, but elsewhere their time has gone, leaving them to fill their time with matters insignificant and inconsequential.

All of which might come across as slightly depressing for those who fear the curse of anonymity.  However, Kundera teaches us not to assume that insignificance is a bad thing – we learn that blending in to the background can be both a talent and an art:

“He has understood nothing – and to this day he understands nothing – about the value of insignificance.  And that is the answer to your question about the nature of D’Ardelo’s stupidity.”
“The uselessness of brilliance – yes, I get it.”
p.14 (Faber & Faber, 2015)

The figure of the great seducer Quaquelique, a wallpaper Don Juan, is the book’s primary example of the power of fading into the background, but the novel is full of life’s little insignificances.

I mentioned Kundera above, and (as always), the writer makes it clear that this is his world.  His novels insist on meta-fiction, with the characters aware of their roles as fictional concepts, and just in case this should slip the reader’s mind, the mentions of ‘our master who invented us…’ will quickly remind them of the fact.  There’s an irony at one point where Charles discusses his play for marionettes, not wanting to use people in his manipulative story – the men of The Festival of Insignificance are nothing if not puppets 😉

From the beginning, the focus of the novel is on the micro, with the first section entitled ‘Alain Meditates on the Navel’.  It takes a bold writer to engage with the concept of navel gazing on the first page, especially when many readers (and critics) might already be thinking in that direction.  There is a wider significance, though, to the idea as the writer, and his characters, ponder the navel as the source of humanity, the invisible thread linking us all back to Eve (the woman without a navel…).

While that idea has a feminine focus, the truth, however, is that while women are present in the book, in reality they’re not really there.  The female representations in The Festival of Insignificance are mere decorations, pretty lights to reflect on and show off their male counterparts.  The only female character who actually attracts the writer’s attention is Alain’s mother, a woman who abandoned her son (to insignificance…) in his childhood.  She seems an interesting figure; it’s just a shame that she’s only present in Alain’s head…

In all, The Festival of Insignificance is entertaining enough, easy to read and a nice way to while away an hour or two.  The problem is that I remember (vaguely) a time when copies of The Unbearable Lightness of Being could be seen everywhere, where Kundera evoked the kind of passion and interest that Murakami conjures up today, where the Franco-Czech writer was a genuine star of fiction in translation, bringing the marginalised ‘world literature’ into the mainstream (even if some of the attention received was of the negative variety, accusing him of sexist tropes).  In truth, it’s very hard to see people getting excited about this book, even to the extent of getting angry about it…

In his first novel, The Joke, Kundera explored the danger of humour in an uncertain world, and there’s an interesting echo of that mid-way through this book:

Despite these words, there’s not much chance of danger here – The Festival of Insignificance is a nice, safe read, a book for the post-Joke era.  You do wonder, though, if this is the start of Kundera’s slide into insignificance, the end of his time as a popular and important voice in world literature.  Whether he cares that much about it is another matter entirely…

8 thoughts on “‘The Festival of Insignificance’ by Milan Kundera (Review)”