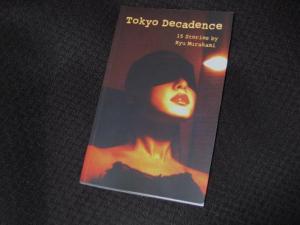 Over the past few years, especially during my January in Japan events, I’ve read and reviewed several books by small publisher Kurodahan Press, who have even been kind enough to offer prizes on occasion.  They’ve published books by the likes of Osamu Dazai and Teru Miyamoto, but in March they have a book coming out from perhaps their biggest-name author yet, one who will be familiar to many of you out there with an interest in J-Lit.  While it might be a stretch to suggest it’s going to be a best-seller, I do think that it’s a book with a wider appeal than most – let me tell you more 🙂

*****
Ryū Murakami has had several novels translated into English (e.g. Almost Transparent Blue, Coin Locker Babies and From the Fatherland, With Love), but he’s also written several collections of short stories, of which only a few scattered examples have been sighted in magazines and online journals.  Thankfully, Ralph McCarthy, who translated (along with several other Murakami books) most of them,  pitched an idea of a kind of greatest hits collection to Kurodahan, and that’s how Tokyo Decadence – 15 Stories by Ryū Murakami came about.  The book contains (obviously) fifteen examples of Murakami’s short fiction, taken from five different books spanning nearly twenty years of his writing career, a selection showcasing all aspects of the writer’s inimitable style.

The first story, ‘Whenever I Sit at a Bar Drinking Like This’, eases us gently into the collection, a fun introduction to some of the darker tales to come:

Of course, despite this heavenly vision, in Murakami’s world there are far more sinners than saints, and this clever story of a man desperate for a favour drags us a little down this path.  Needing some help to get out of a sticky situation, he trades promises and favours until luck smiles on him, as it usually does.

This story comes from a collection entitled Run, Takahashi!, where all the stories are linked by this refrain, aimed at Hiroshima Carp baseball player Yoshihiko Takahashi.  In the first story, Takahashi appears in person, but the other stories here have a less personal connection with the player.  Two see their protagonists (the first a famous author, the second a cross-dressing single dad) head off to the stadium while ‘Each Time I Read Your Confession’ has the baseball action on television in the background – where Takahashi’s attempts at stealing bases provide the backdrop to some rather gruesome action…

While the first four stories are noticeable for their light touch, the second featured collection, Topaz, is far darker.  Tokyo Decadence contains three pieces from this book, all featuring call girls.  ‘Topaz’ is a melancholy tale detailing a prostitute’s sad life, taking us through a day in the life of a woman going nowhere, while ‘Lullaby’ has the main character looking for an old flame and closure after years of regret.

‘Penlight’ starts off in a far lighter tone, as a woman with an inner voice (called Kiyomi!) blunders chaotically from one sexual encounter to another.  A coincidental meeting with a nice man who wants to help seems to offer a change from the woman’s depressing life, so why does Kiyomi suddenly fear him so much?  Never fear, gentle reader – all will be revealed, in an ending with a very R. Murakami twist 😉

The next collection, Ryū‘s Cinematheque, is slightly different in tone, with a first-person protagonist reminiscent of the hero of Murakami’s coming-of-age novel Sixty-Nine.  A young man arrives in Tokyo from the Japanese Deep South, and ‘The Last Picture Show’ sees the start of his corruption as he helps a Yakuza neighbour with some rather dubious drug deals.  ‘The Wild Angels’ then showcases his descent into debauchery, with scenes of orgies, drugs and randy GIs which could have come straight from Almost Transparent Blue.  In ‘La Dolce Vita’, we see our young friend come out of the other side of this storm as he returns to a more ‘normal life’ at university (a story à la Haruki rather than Ryū!).

Swans takes us in a different direction again as, the title story aside (which features a random lesbian encounter at a Dutch-themed amusement park…), the common thread to the stories is a woman called Mieko.  The three remaining stories are all narrated by men who become involved with the rather unhappy woman.  The best of these is, perhaps, the first, ‘Historia de un Amor’, in which a young waiter connects with her over a shared passion for Cuban dance and music, and a rejection of conventional Japanese society:

This society is steeped in the notion that we have everything we need.  I know, because I was steeped in it too until I met Jun’ichi.  The sad part is that people don’t like it when you begin to realize that something important is missing.  You can end up being ostracized, or even persecuted, like witches in the Middle Ages.
‘Historia de un Amor’, p.192

The meeting represents a chance of happiness for the unfortunate Mieko – the question is whether she’ll find the strength to take it.

The selection is rounded off by ‘At the Airport’, from the collection of the same name, where a woman (yet another prostitute) is waiting at the airport for her main client to take her on a trip to Hokkaido.  As people come and go, she stands reflecting on her life, lamenting the obstacles in the way of her dreams:

I’m a high-school graduate, thirty-three years old, divorced, raising a four-year-old child, and I work in the sex trade.  These facts define who I am and limit my freedom and possibilities.
‘At the Airport’, p.262

The man she’s waiting for takes a different view, though, and if things go well, it might just be possible to follow her dreams anyway.  This is a bitter-sweet tale, and a nice way to end the book.

While publishing a best-of collection is an interesting idea, it would have been nice to see the rest of the stories, in particular, the thematically-linked pieces of Run, Takahashi! and Swans.  Perhaps, though, it’s better this way as some of the stories (particularly those from Topaz) did seem a little similar, which may have got a little old very quickly.  This approach also allows us to see Murakami at different stages of career, showing us his development as a writer and the change in focus over the years.

In short, Tokyo Decadence is an entertaining set of stories, well worth seeking out for all J-Lit lovers (and a must for any Ryū fans out there), and if that sounds like your kind of thing, you should check out Kurodahan’s site for more.  They have a good range of books over a number of genres (e.g. Speculative Fiction and Thrillers), so there’s a good chance you’ll find something that appeals 🙂