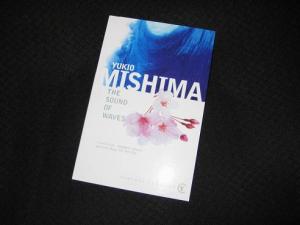 One of the things I like about my January in Japan reading (extended into February…) is the opportunity to get to books which have been languishing on the shelves for a while, and today’s choice has been kicking around for far too long.  Over the first few years of the blog, I read several works by Yukio Mishima (including all four parts of The Sea of Fertility series), which makes it surprising that I never quite found the time to get around to the last one of his I bought.  On that note, then, it’s time to head off to Japan’s Pacific coast for a short island holiday, and a meeting with a couple of star-crossed lovers – I wonder if it’ll end well…

*****
The Sound of Waves (translated by Meredith Weatherby, published by Vintage Books) takes us to the small island of Uta-jima, just off the Japanese mainland.  The hero of the tale is Shinji who, after the death of his fisherman father, has become the breadwinner for his family (his mother and younger brother, Hiroshi).  One day, while walking along the beach, he sees an unfamiliar face, a rarity on the small island:

The boy could not remember ever having seen this girl before.  There should not have been a single face on Uta-jima that he could not recognize.  At first glance he took her for an outsider.  But still, the girl’s dress was not that of outsiders.  Only in the way she stood apart, gazing at the sea, did she differ from the vivacious island girls.
p.8 (Vintage Classics, 2000)

While it’s not love at first sight, there’s certainly mutual attraction, and Shinji tries to find out more about her.

It turns out that the girl’s name is Hatsue, and she’s the daughter of the wealthy Terukichi Miyata; having been adopted out, she has recently been brought back to the island after the untimely death of Miyata’s only son.  Shinji naturally falls for the beautiful young woman, but with the father wanting a well-off son-in-law to marry Hatsue and be adopted into the family, it’s unlikely that the young fisherman will be able to impress him.  Still, that’s not going to put off a determined suitor, and soon the whole island is aware of the burgeoning romance…

If you’ve read a lot of Mishima’s work, The Sound of Waves may come as a surprise.  It’s a gentle-paced, soothing romance, a book I’d best describe as very unMishima-like – in fact, one Twitter comment (I will protect the user’s anonymity…) even called this his dullest book.  Which seems a little unfair to me.  It’s true that there’s no real drama, and a distinct lack of blood, but if you scratch the surface, there’s a lot to like about the book.

The main focus is, of course, on the romance, and we follow the young lovers along their path to happiness, witnessing their coincidental meetings, and the significance of the dropped envelope full of Shinji’s wages.  Eventually, the innocent flirtation leads to an unexpected encounter on a dark and stormy night, and a heated moment of temptation.  However, this is no steamy story; both products of a deeply traditional island culture, the pair are determined to go about things the right way lest they anger the gods.

There are complications, naturally (it wouldn’t be much of a novel, otherwise), and one of these is the obvious gulf in status between them, one shown in many different ways:

Whether it’s Shinji’s family background, appearance or lack of money, Hatsue’s father has no interest in allowing his daughter to follow her heart, instead opting for rich kid Yasuo Kawamoto.  Matters aren’t helped when Chiyoko, another returning local whose feelings for Shinji cripple her with jealousy, spreads rumours which cause trouble for the young lovers.  Throughout, there’s a sense that a closed community like Uta-jima needs order – and that people shouldn’t get above their station.

If that was all there was to The Sound of Waves, then I’d agree that it wouldn’t make for much, but there is far more than this to enjoy.  For one thing, a major part of the appeal is the setting and the writer’s description of the island and the connection the locals have with it:

The boy felt a consummate accord between himself and this opulence of nature that surrounded him.  He inhaled deeply, and it was as though a part of the unseen something that constitutes nature had permeated the core of his being.  He heard the sound of the waves striking the shore, and it was as though the surging of his young blood was keeping time with the movement of the sea’s great tides.  It was doubtless because nature itself satisfied his need that Shinji felt no particular lack of music in his everyday life. (pp.44/5)

As the novel progresses, the annual cycle of the island is almost as prominent as the plot.  There are the women divers with their different tasks, the seasonal fishing, the driving rain and salt air.  On Uta-jima, the people are still controlled by the passing of time, not to mention the whims of the weather gods…

Mishima also creates a sense of a tipping point.  The novel is set a few years after the end of World War Two, and while it’s often easy to forget this, relaxing in a timeless idyll, we’re eventually dragged back into the present by mentions of electricity, or the trams and movies Hiroshi sees on his trip to Kyoto.  Surprisingly, Mishima is actually fairly positive about progress, in his emphasis on modernity firmly behind Shinji’s battles against old money and traditional attitudes, with the sympathy of the reader also with the young man.

Of course, despite this optimism for the future, with Mishima there’s always a sense of looking longingly over your shoulder at the past.  The islanders are often described as being uninterested in what’s happening on the mainland, and many of the negative qualities displayed in the book are shown to have come from elsewhere (e.g. Chiyoko’s jealousy, Yasuo’s laziness – and his leather jacket!).  Despite the advances in some areas, Uta-jima is painted to be an unspoiled idyll, with a population of noble and understanding people – which can be a little unrealistic at times 😉

I’d agree that The Sound of Waves is not one of Mishima’s best books, but it’s still one I enjoyed, a nice look at traditional island culture in Japan.  Yes, it’s not really much more than Romeo and Juliet on a small island, but there’s nothing wrong with that.  If you’re fed up of complex, depressing reads and are looking for something a little lighter, this might make a nice change 🙂

11 thoughts on “‘The Sound of Waves’ by Yukio Mishima (Review)”