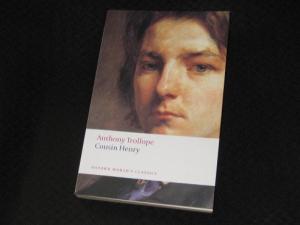 It’s been a long time since I’ve read anything by Anthony Trollope, one of my guaranteed go-to comfort writers, but there’s a reason for that.  Quite apart from my focus on fiction in translation, I’d already tried most of his more famous (and easily obtainable) works, many of them on several occasions, so there was nothing out there that I really needed to get to urgently.  However, I did have one shorter work languishing on the shelves, and I thought it might be time to have a glance at it.  Let’s see if there’s more to Trollope than the gigantic social novels we all love 😉

*****
Cousin Henry (published By Oxford World’s Classics) takes us to Camarthen in Wales, where genial old Indefer Jones is spending his final years in the company of his niece, Isabel Brodrick, on his Llanfeare estate.  Having earlier decided to  make Isabel his heir, he has a change of heart, feeling it his duty to pass the estate on to the next male in the family line, his nephew Henry.  With Isabel content to follow the old man’s wishes, despite her dislike of her cousin, Uncle Indefer invites the young clerk down from London, only for Henry to reinforce every negative image the locals had of him from previous encounters.

By the time the old man passes away, rumours have gone around that a new will has been made, making Isabel the heir once more, yet when the drawer containing Indefer’s papers is opened, this additional will is nowhere to be found.  Despite a lot of mumbling and grumbling, the locals have no choice but to bid farewell to their beloved Isabel and acknowledge Henry as the new owner of Llanfeare.  However, this is not the end of the matter – what if the will really was made, and it’s still somewhere in the house?

Legal affairs are not uncommon in Trollope’s work (c.f. The Eustace Diamonds, Orley Farm, The Three Clerks), and that’s the direction Cousin Henry takes in the second half of the story, with a local newspaper deliberately defaming the young heir in the hope of forcing him into a courtroom.  However, this is far less a courtroom drama than a pyschological case study, with the real story only starting once the initial uproar over the will has subsided and Henry is left to reflect upon his property – and his actions.

From the start, Trollope makes it clear that the young clerk, while perfectly entitled to be left the estate, is not really worthy of the prize, something his uncle realises when Henry has spent a while in Camarthenshire:

‘Yes; I had intended that you should be my heir, and have called you hither for that purpose.  Now I find you to be so poor a creature that I have changed my mind.’  That in truth was what his uncle had said to him and had done for him.
p.84 (Oxford University Press, 2008)

Uncle Indefer isn’t the only one to openly show disdain for the outsider, and in many ways this unfair treatment is to blame for what follows, Henry’s inability to confess what he knows about his uncle’s final will.

It is this middle section of the book which is the true heart of the novel, a psychological study of a weak, vacillating man caught between the desire to do the right thing and the fear of behaving badly, even if there’s the possibility of getting away with it.  Caught between a rock and a hard place, most people would eventually jump one way or the other and accept the consequences, but Henry finds himself unable to take the smallest step towards resolving his dilemma, in the process alienating even those who wish to think the best of him.  His every action, such as his reluctance to leave the small reading room where he spends the majority of his day, betrays him, as does his own body, cold sweat appearing on his pallid forehead as he sits avoiding eye contact with his few visitors.

The contrast with his cousin is striking.  Isabel is a strong woman, whose will, if anything, is too strong.  She suspects that she is the rightful heir of Llanfeare but is unwilling to undertake any actions against Henry, as much as she despises him.  This strength of character even extends to her refusal to marry the man she loves, not wanting to drag him down once it becomes clear that she is to receive nothing from the will (of course, as anyone who has read a Trollope novel before will instantly realise, the chances of her ending the story unmarried are very remote…).

There’s a lot to like about Cousin Henry for Trollope fans, with the usual comforting narratorial style and the odd witty aside from the narrator:

It must be acknowledged that the part to be played by the intended heir was very difficult.  He could perceive that his uncle hated him, but he could not understand that he might best lessen that hatred by relieving his uncle of his presence. (p.27)

The story is particularly strong when focusing on Henry’s inner turmoil (c.f. He Knew He Was Right), showing a man squirming beneath his own sword of Damocles, the owner of a large estate but surrounded by people whose only desire is to tear it from his grasp and cut him to pieces in the process.

Having said that, Cousin Henry doesn’t really match up to Trollope’s better-known works.  Ignoring Isabel’s dilemmas (and that’s fairly easy to do), this is a one-plot book, similar to The Warden in many ways, and that plot doesn’t really justify all the pages the writer devotes to it.  Tony T. is at his best when he has 500+ pages to play with, rolling comfortably through the gears and taking his time in sketching out his world, but he takes so long here to introduce the story (and then wrap it up) that the reader’s impression is of a brief tale wrapped inside a hell of a lot of padding, especially at those points at the start of the original magazine installments where the writer summarises a lot of what happened last time…

Still, assuming that anyone looking to read the book is likely to already be fairly well acquainted with Trollope’s world, I’d certainly recommend Cousin Henry as a comfortable way to while away a couple of hours.  It’s also an effective warning against keeping secrets, and getting involved with newspapers and lawyers, so if anyone is considering any wrongdoing concerning wills, Trollope’s story may come as some timely, if sobering, advice 😉