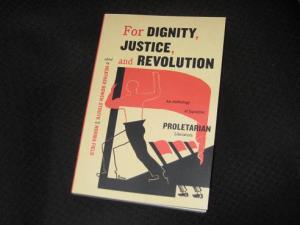 This year’s January in Japan has been a low-key, personal affair, spread out over two months, but I’ve still enjoyed my annual concentration of J-Lit reading.  I’ve had one last summer by the coast with an old friend; ventured down to Nagasaki for some contemplation of the past; continued my immersion in the world of the legendary Genji; hung out on the dark side of Tokyo; travelled down to the calm woods of Shikoku; had a brief island holiday; and met the tired troops returning from the Russo-Japanese war.  By any measure, that’s quite a trip 😉

There’s one last stop to make before I leave Japan for a while, however, and I must warn you – today’s trip will be a bumpy one.  We’re heading back to the red decade spanning the 1920s and 30s, in search of some writers with a slightly different slant on their art to the usual aesthetes.  Heads down, watch out for the police – oh, and keep the red flag flying, please…

*****
For Dignity, Justice, and Revolution: An Anthology of Japanese Proletarian Literature (edited by Heather Bowen-Struyk and Norma Field, review copy courtesy of University of Chicago Press) looks at an area of J-Lit often ignored by other anthologies, the proletarian literature movement of the late 1920s and early 1930s.  Flicking through other collections I own, I noticed very few stories from this movement, and in the introductions it’s usually casually glossed over, if mentioned at all (Donald Keene, for example, is rather dismissive of the genre in the introduction to his Modern Japanese Literature Anthology).  This collection, then, attempts to redress that balance, introducing a bumper collection of stories and criticism from many of the movement’s leading lights.

The introduction explains the origins of the movement and its complexities.  Taking its cue from the Russian formalist movement, the Japanese writers attempted to stay true to these socialist ideals while highlighting the particular issues faced in Japan (a ‘pre-revolutionary society’).  The stories here are written about, and for, the poor of the country, shining a light on poverty, industrial relations and police brutality.  Many are taken from literary journals, written in the face of constant censorship and fear of arrest, and one interesting touch is how the affected sections here are shown by being crossed out.

Unlike many anthologies, this one is not afraid to draw more attention to the big names, and the most famous proletarian writer, Takiji Kobayashi, is represented here by several stories, including the longest piece in the collection, ‘March 15, 1928’ (translated by Justin Jesty).  Almost a novella, this story draws attention to a little-known operation, where hundreds of activists were arrested in the middle of the night in an attempt to disrupt protests planned for the following day.  It’s a picture of struggling revolutionaries as pioneers doomed to fail, even as they pave the way for future generations:

Oyoshi knew that these incidents could happen hundreds of times and even that wouldn’t be enough to create a society of their own.  In order to bring about that society, they’d have to become the stepping-stones for those who would come after, they’d have to put their .  She’d heard that when armies of ants moved, if they came to a river they had to cross, the ants in front would pour into the river, pile on top of one another and drown, offering their own bodies as a bridge for the ones who came after them.  The young people in the union often talked about having to be just like ants at the front.  And they were right.
‘March 15, 1928′, p.118 (University of Chicago Press, 2016)

Kobayashi shows the brutal methods the police used to break the activists (something he had personal experience of) and explores the different ways the men cope (in particular, the contrast between the resistance of the intellectuals and the blue-collar workers).

Kobayashi’s work also appears among the examples of ‘wall stories’, short stories designed (possibly) to be pinned up in work places and read by workers (a constant dilemma for the proletarian writers was how to get their message across to people who might be unaccustomed to reading).  His piece ‘Letter’ is interesting both for Samuel Perry’s translation – an attempt to reflect the original register with American slang – and for the story of a man injured at work, whose slow demise drags the whole family down into poverty.  Yi Tong-gyu’s ‘The Bulletin Board and the Wall Story’ (tr. Samuel Perry), a story focusing on the workers’ response to an experiment by bosses in a factory, gives one possible origin for the ‘wall story’, but it also highlights the role Korean writers and workers played in the proletarian movement.

In fact, existing at the bottom of the social order of the Japanese Empire, Korean labourers perhaps suffered more than their Japanese counterparts, and Chang Hyok-chu’s ‘Hell of the Starving’ (tr. Samuel Perry) provides an extended portrait of the starvation and exploitation of rural farmers forced to work on the construction of a dam:

As patient and persevering as oxen, as tolerant of pain as a rock, the farmers cast their own bodies beneath the whip for a wage no larger than a cat’s teardrop.  From when the stars began fading in the eastern sky until the owls hooted in the forests at night, they worked like wooden puppets, forcing frozen joints to bend against their will.
‘Hell of the Starving’, p.298

The whipping of the workers is more reminiscent of Ancient Egypt and the building of the pyramids than anything in the modern world, and it’s inevitable that the worm will eventually turn…

Much of what I’ve described so far suggests that the movement, and the wider society, was very much a man’s world, but women played a major role both in proletarian literature and in the societal struggle.  There are several mentions of a 1930 factory strike led by women, and this conflict is fictionalised in Sata Ineko’s ‘Prayer’ (tr. Mamiko Suzuki), showing the energy and violence of this struggle (and the difference in the way the ordinary workers and the Christian minority handled themselves at the time).  Another big name in the movement was Miyamoto Yuriko, and her story ‘The Breast’ (tr. Heather Bowen-Struyk) is one of the better contributions here, giving a woman’s view of strikes and hardship and showing the important role women played in supporting activists who found themselves in prison or locked up in police stations.

Miyamoto’s (and Kobayashi’s) work drew praise from mainstream writers, but this was not always the case for proletarian literature, with frequent criticism of dull, turgid prose and predictable stories (one example of that here is Hayama Yoshiki’s ‘The Prostitute’ (tr. Lawrence Rogers), a kitsch, clichéd tale of an upright young man angered by the treatment of a poor woman).  However, the leaders of the movement were well aware of this, and there are several theoretical pieces in the anthology addressing what it means to write proletarian literature.

One of the most interesting is Hirabayashi Taiko’s ‘On the Tendency of Proletarian Works to Become Formulaic’ (tr. Ann Sherif), in which she rejects these criticisms:

In fact, proletarian writers, even those whose work tends to be autobiographically inspired, manifest more rich and varied ups and downs in their lives than most Japanese writers to date.  We write about subject matter that differs from mainstream literary writers, so people take notice of the commonalities.  From a distance, our works may thus appear to be all about the same thing.  In fact, there is nothing narrow about the range of topics we write about.
‘On the Tendency of Proletarian Works to become Formulaic’, p.182

I wasn’t always convinced that this is the case; having said that, there is a wide range of texts here, ranging from children’s stories (complete with class-conscious insects!), flash fiction and stories set across a number of different environments.

The proletarian literature movement was short-lived and seems a bit of an oddity now, but at the time it was anything but; there was a real belief in the importance of the class struggle in a country where opposition could be deadly.  Perhaps the best evidence of this is the fate that met Kobayashi, the star writer of the movement.  Like the characters in his stories, he was arrested and tortured by the police, eventually dying of his injuries…

While For Dignity, Justice, and Revolution is a fascinating insight into a little-known area of Japanese literature, it’s certainly not for everyone.  I was drawn to the collection because of my liking for J-Lit, but it’s probably of more interest for those passionate about proletarian literature, or Marxist thinking in general.  A blast from the past?  Perhaps – but with the developed world, seemingly, moving further right every day, there are certainly lessons to be learned from the writer’s struggles to get their message out to a public sleep-walking into an uncertain future…

4 thoughts on “‘For Dignity, Justice, and Revolution’, edited by Heather Bowen-Struyk and Norma Field (Review)”