Earlier this week I looked at the three runners-up in the 2015 Ku Sang Young Writer’s Award, organised by Asia Publishers, and today it’s time to look at the story which actually took out the award.  After that, as promised, I’ll also be taking a brief look at a bonus story, one I’ve actually reviewed before.  Unfortunately, though, most of you are unlikely to have seen that piece, so consider today’s mini-review an attempt to fill that gap 😉

*****
While the other three stories all looked at Korean society through the eyes of a stranger, Cheon Myeong-kwan’s Homecoming (translated by Jeon Miseli) takes a rather different approach.  It’s a dystopian work set in a future Seoul where capitalism has been taken to its extremes, with 90% of the population (the so-called ‘blankets’) living in squalor, relying on hand-outs in the form of vouchers to survive.  If you’re wondering what the government is up to, the truth is that there isn’t one really, merely a small administrative section of one of the huge conglomerates which dominate the country.

The protagonist of the story wanders through a horrific city, from the welfare office manned by bored, sadistic coordinators, to the black markets in the derelict area north of the Han river.  Doomed to a life of poverty after his father left the family behind three decades ago, he is unable to care for his young son, going without food in order to scrape together enough vouchers to get some medicine – which may not even work.  As his hope crumbles, he decides to play his final card and enjoy one last meal with his son before they are forced to separate – which is when his luck turns…

Homecoming was easily my favourite of the four stories when I read them last year, and despite 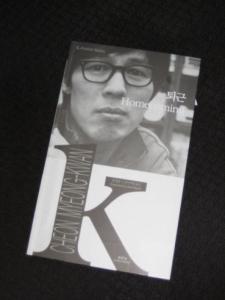 some misgivings about the deus ex machina ending, I still think it’s the cream of the crop (in fact, it received thirteen of the twenty-seven votes on offer from the judges).  Cheon uses his prediction of a nightmare future to criticise present-day Korea, a place, let’s not forget, that many of its young residents have taken to calling ‘Hell Joseon’ (‘Joseon’, or ‘Choson’, being an old name for Korea).

From the first page, we are plunged into a disturbing world, following the protagonist into the office of the Employment Corporation:

Some flyers were for recruiting mercenaries to be dispatched to the Middle East, which had been attacked with nuclear weapons, others for inviting people to participate in experiments conducted by pharmaceutical companies.  But most were for trafficking in human organs, with a message printed in Korean such as:

Would you sell off your last remaining property for a song?
pp.9/11 (Asia Publishers, 2015)

The mention of Korean seems strange here, but later we learn that it has a deeper significance as English has become the official language of the country, with Korean used only by the lowest levels of society.

A minority of super-rich investment experts, supported by a small white-collar class, control a country focused on capital investment, meaning that work is an impossible dream for the vast majority of the population.  A new apartheid has sprung up, with restaurants only open to clients wearing company badges, menus in English showing what the ‘blankets’ will never be able to experience.  Across the river, meanwhile, the underclass struggles on, huddled together in abandoned buildings, almost willing the old, decaying buildings to collapse on them rather than leave them to face another day of mental torment…

It’s a scary tale (and it would make a great movie), but it’s also a little too close to the truth for comfort.  Cheon has merely taken the current situation in Korea and accelerated it, arriving at his twisted view of the future.  When you take a quick look at the news around the world (the American right’s horror of anything approaching universal health care, the stand-off between the British government and junior doctors, the plight of baby refugees in Australia and the government’s plans to send them to a discredited offshore-processing camp), Homecoming seems more of a documentary than a far-fetched piece of fiction…

*****
So, on reflection, the right story won (which is a relief!), but these four stories aren’t the only books out in the Asia Publishers K-Fiction Series.  So far, thirteen of these bilingual editions have appeared, and I reviewed the most recent release, Chang Kangmyoung’s Fired (translated by Teresa Kim) for the Winter 2015 edition of the print journal Storytelling ASIA.  Sadly, there’s no online link to my review, so I’ll just give a brief summary here 🙂

Like Homecoming, Fired examines social issues in Korea, but this time we’re looking at present day concerns.  The main focus of the story is the dilemmas Un-yeong, a female middle manager in a small company, faces when her boss recommends that she fire a temporary worker.  The young woman, Hye-mi, is sullen, unhelpful and often late to work, so it seems a fairly straight-forward decision.  However, Un-yeong soon realises that Hye-mi is not as dumb as she thought – and that even in corporate Korea, firing someone isn’t quite as easy as you might think.

Fired is a simple, clever story, where the writer manipulates the reader into sympathising with the manager, only later planting seeds of doubt in our minds.  There’s also a lot here on gender politics, both in the way Hye-mi is expected to behave as the face of the company and in Un-yeong’s fear of making mistakes in a male-dominated environment.  Anyone who has watched K-dramas set in offices will know that where western companies at least claim to come down heavily on anyone taking advantage of women, Korean companies almost seem to expect this sort of behaviour…

Looking back to books such as Cho Se-hui’s The Dwarf and Yang Gui-ja’s A Distant and Beautiful Place (and then shooting ahead to Homecoming!), Fired is another literary work which attempts to alert people to the dangers of Korea’s business structures.  I enjoyed it, especially with the bonus of the writer’s commentary and the original text, so if that sounds like something you’d enjoy, check out the Asia Publishers page at Amazon (pretty much the only way to get hold of the books) and have a look for yourself 🙂