Well, our trip to Brazil was… let’s say ’emotional’, but it’s time to make the bed and continue on our Man Booker International Prize world journey.  Today, we’re heading off to China, and if our last stop was a flying visit, this one promises to be a rather longer stay (if we actually manage to make it out at all).  It’s time to start collecting stars…

*****
The Four Books by Yan Lianke –
Chatto & Windus, translated by Carlos Rojas
Review copy courtesy of Australian publisher Text Publishing
What’s it all about?
China, the late 1950s, in the middle of Mao’s ‘Great Leap Forward’.  Stretching across land located near the Yellow River is a collection of reeducation camps, prisons in all but name, where those with unrevolutionary thoughts are sent to be reformed.  In one of these Chinese gulags, the 99th, a group of intellectuals known only by their occupations (the Author, the Scholar, the Musician, the Technician) are set to work by their supervisor, an enigmatic figure called the Child, forced to grow wheat to feed the country’s enormous population.

Soon, however, their plans are altered, with a directive from above bringing a switch from farming to the production of steel.  With many of the prisoners struggling to find motivation, the Child introduces an ingenious idea of awarding stars for good behaviour, a system which might lead to an early release from Re-Ed, leading to the 99th becoming a model for other camps in the production of steel.  As the mania for steel production reaches a fever pitch, it soon becomes clear, though, that things haven’t been thought through entirely.  When a long, cold winter sets in, the prisoners come to realise that you can’t eat metal…

The Four Books is a subversive work examining the disastrous events of the Great Leap Forward, in particular the way a desire to become self-sufficient and to catch up with (and surpass) the leading industrial nations of the time led to an environmental catastrophe with even more serious consequences.  The decision to encourage wide-scale steel smelting might have seemed sound at the time, but it led to entire forests being hacked down, radically changing the landscape:

When he gazed into the distance, he saw Kaifeng stretched out before him, with houses scattered about, just as the Theologian had described the Tower of Babel.  There were no trees in the entire city, as all of them had been chopped down for use in the steel-smelting furnaces.  The landscape was completely bare, and Kaifeng looked like a wasteland.
p.151 (Text Publishing, 2015)

This environmental destruction starts off innocently enough, but as the novel progresses, the damage becomes ever worse, starting a chain reaction of events officials are powerless to stop.

Of course, the tragedy is exacerbated by the utter uselessness of the steel-smelting endeavour, an activity dreamed up by the higher powers, which those below then twist to meet their needs.  Just as the camp leaders had earlier reported exaggerated, unachieveable targets for their grain harvests, now they supplement their steel yields by throwing anything they can find into the furnaces – tools, metal rice bowls, scythes.  Later, one of the prisoners finds a new source of iron for smelting, using the iron-rich earth by the river as a raw material and extracting metal particles with magnets.  The fact this produces fairly poor-quality metal is irrelevant…

One of the focuses of Yan’s novel is an examination of the system which allows these events to happen.  In such a vast society, there needs to be a way to control the people, and it might seem hard for the western reader to understand how the Re-Education camp works at first.  There appear to be no guards, merely the Child, with nothing stopping the inmates from simply walking off.  The truth is, though, that the size of the land itself is part of the solution – there’s a Siberian element to the isolation, and for tens of miles around nothing but more camps.  Anyone wandering off will merely be picked up somewhere else.

But by whom?  Well, that’s the clever part.  The missing guards are supplied by the prisoners themselves, who are actively looking for people breaking the rules in the hope of being rewarded, and (if they’re lucky) even being sent home.  The early chapters are full of people prowling around in the dead of night in the hope of catching a couple of  their fellow prisoners in flagrante.

Even more ingenious, though, is the blossom system, whereby the Child bestows small blossoms for good behaviour, with each prisoner hoping to earn enough to swap for medium-sized blossoms and pentagonal stars:

To tell the truth, the Red Blossom and Pentagonal Star system that the Child implemented was a stroke of genius, and it encouraged everyone to enter a self-governing track, as though a herd of horses and oxen were to start plowing the fields on their own accord, without needing to be flogged. (p.47)

The irony here is that the Child himself is caught in the same trap.  Each time he proudly reports the achievements of his camp, his superiors dangle another carrot in front of him, promising trips to the capital if he can just squeeze more wheat and steel from his prisoners.  While the prisoners see him surrounded by a kind of aura, outside his little world, it’s clear that he’s merely a low-ranking functionary, just as trapped as those he watches over.

Anyone interested in reading The Four Books will no doubt be intrigued by the title – and, yes, 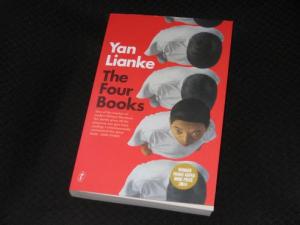 there are four books, extracts of which are interspersed throughout the novel.  The first one to appear, Heaven’s Child, is written in a manner mixing Biblical language and fairytale style, an anonymous chronicle of the events of the camp.  Two of the other books are written by one of the prisoners, the Author: Criminal Records is an account he is commanded to write (in secret) by the Child, recording events in the camp; Old Course is his own take on daily life, a more critical look at the disasters befalling the prisoners.  Each of the books has a distinct style, with its own, slightly unreliable, author.

The fourth of the works is only revealed at the end of The Four Books, the fruit of one of the major characters, the Scholar.  He is perhaps the only person to see the madness of the course the Child is following and does his best to keep his independence of thought.  Just one short extract from his secret musings, A New Myth of Sisyphus, appears at the very end of the novel, but its effect is to focus the reader’s thoughts on all that has gone before.  In fact, when you compare his ideas on how prisoners will always adapt to any punishment with the mention in Rojas’ introduction of Yan’s struggle with censorship, there’s a sense that constraints on the writer’s work may actually have helped shape the creation of The Four Books…

Does it deserve to make the shortlist?
Definitely.  I wasn’t a huge fan of his 2012 IFFP-longlisted work Dream of Ding Village, but this is much better.  It’s a clever, satirical, thought-provoking look at a controversial period in China’s modern history, made all the better by the knowledge that the writer has had to carefully measure every word.  While not explicitly criticising the party, and perhaps emphasising the way the best intentions can be ruined by vested interests, Yan paints a sobering (and, at times, bloody) picture of a people in crisis.

Will it make the shortlist?
I’d be very surprised if it didn’t.  This is the kind of book prizes like this are looking for, a slightly political edge, a ‘worthy’ topic and (happily) a good story too.  East Asia has made a very strong showing on this years longlist, and I suspect that the prize may be heading in that direction.  Will it be going to China?  It’s very possible…

*****
Good news – I managed to swipe a few large Pentagonal Stars (just don’t ask how I got them…), and we’re free to resume our journey.  Next time out, we’re off to France, where an early morning trip to the beach goes horribly wrong.  I’ll meet you all at the hospital…