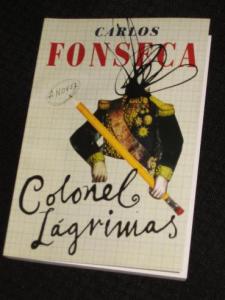 Today’s post takes us to another new country for the blog, with a first taste of Puerto Rican fiction.  However, if the country (and the writer) is new, the style isn’t, as there are some unmistakable influences.  It’s a very Latin-American tale, but it takes place far from home – today, we’re off to the Pyrenees to meet a very special man…

*****
Carlos Fonseca’s Colonel Lágrimas (translated by Megan McDowell, review copy courtesy of Restless Books) is a novel that takes place entirely within the mountain home of a former mathematician.  The story is told by the voice of a mysterious group of narrators, observing the old man as he sits at his desk writing tales based on the lives of long-dead minor historical figures, and the two-hundred pages of the book cover one day in the colonel’s ordered, but hermitic, existence.

Behind this simple description, though, lies a far more complex story, as the disembodied voices reveal the secrets of the Colonel’s past.  From his youth in Mexico as the child of Russian immigrants, to a snap decision leading him to live in Vietnam at the height of the war there (via a dangerous period in Paris during the Second World War), the old man’s life is laid bare, the voices circling around and returning to certain crucial aspects of his past.  As the novel progresses, there’s one image that we repeatedly return to, a photograph of the Colonel as a younger man, with a woman’s face in the background.  Perhaps there’s a reason behind his decision to turn his back on the world and seclude himself in his mountain retreat…

Colonel Lágrimas is a clever book, slightly claustrophobic in its setting, but spanning the globe through its focus on the old man’s memories.  An examination of a life and the regrets that have amassed along the way, the story is (very) loosely based on the life of French mathematician Alexander Grothendieck (not that I would ever have known this if the ARC blurb hadn’t mentioned it…).  Early on, we’re introduced to our erudite friend :

We don’t know why we call him the colonel.  Perhaps because we can see in his face the marks of a man on a mission, one who comes from a  military aristocracy that sizes up the world.  Perhaps because in the midst of war, he opted for idleness and for knowledge.  Yes.  The Colonel used to be a mathematician, but no longer.
p.10 (Restless Books, 2016)

Although he’s a man we know nothing about, our shadowy guides are there to fill us in, examining him from all angles in a scientific study.  However, there are several hints along the way that the days of the eighty-three-year-old recluse may be numbered.

While the novel initially focuses on the scene inside the house and the stories the Colonel is writing, the scope gradually widens to allow us more insights into his background.  His father, a Russian political emigrant, was killed in the Spanish Civil war, and his mother is a shadowy figure, an artist who is to turn up unexpectedly later in the Colonel’s life.  Another face (literally) that keeps appearing is that of a woman in a photograph from our friend’s past, less a souvenir of happy times than a reminder of a turning point in his life.

The story shifts focus somewhat with the introduction of Maximiliano Cienfuegos.  A Mexican who once met the mighty mathematician, he has become the Colonel’s spiritual heir, the recipient of a series of postcards full of aphorisms and witticisms that the younger man decides to create a great work from.  Eventually, the Colonel breaks off contact, deciding that his words should fade from the world when he does, but Maximiliano has other ideas.  He takes off around the world, and now his own missives reach the Colonel, circling the globe and gradually getting closer to the old man’s secluded home.

If it all sounds a little vague, forgive me, but that’s how it reads.  While the story is tied to certain aspects of Grothendieck’s life (in particular his move to the Pyrenees and his political activism), most of the details have been reimagined, Latin-American style.  It’s beautifully written, with more good work here by the excellent McDowell (responsible for bringing the work of Alejandro Zambra, Álavaro Bisama and Lina Meruane – amongst others – into English), even if the style can overpower the substance at times.  The novel meanders enormously, with the middle section dragging a little, but the final third is much tighter as the pieces of the puzzle begin to fit together – particularly the significance of the woman in the photograph.

While I wouldn’t say that the book is a work of magical realism, there are obvious nods to writers of that genre, with Fonseca obviously unafraid to wear his GGM influences on his sleeve:

His solitude is, however, one that he has come to terms with: this colonel does have one who writes to him. (p.60)

However, the more I read, the more similarities I found to another work of Latin-American fiction, Salvador Elizondo’s Farabeuf.  There’s the same obsessive circular motion of the plot, the same focus on repeated images (the photograph, a mathematical formula that I couldn’t begin to describe, a scribble in the shape of barbed wire) and the same feeling that the writer is playing with the reader, leaving clues pointing to hidden truths in the Colonel’s life without ever going so far as to actually reveal them.

I’m not sure I really got exactly what Fonseca wanted to say in Colonel Lágrimas (in fact, I’m not entirely sure there was a central idea I should have grasped), but I certainly enjoyed trying.  In the words of the writer:

Nothing happening here, or almost nothing, but in the midst of this incurable tedium a life is decanted towards its end. (p.195)

Which in Fonseca’s hands, far from being something to grieve, becomes a celebration of a life less ordinary.  Let’s raise a toast to the Colonel – and enjoy it to the last drop 😉