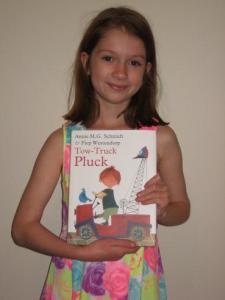 My little helper has been rather busy recently with school work and basketball training, but she’s always ready to drop everything when another book arrives, especially when it’s by a writer whose work she’s enjoyed before.  Luckily for her, then, we had more post a short while back, a parcel with Emily’s name on it from the good people at Pushkin Children’s Books.  Let’s see how she liked this one 🙂

*****
What’s the name of the book, and who is it by?
The book is called Tow-Truck Pluck and it’s by Annie M.G. Schmidt & Fiep Westendorp (and it’s translated by David Colmer).

What’s it about?
It’s about a brave boy with a very famous tow truck, a hygiene-obsessed neighbour and an overgrown park about to be ruined.  With the help of a speaking seaside shell, a wolf ferryman and a not-so-helpful hermit, Pluck might just be able to save the park and help some friends along the way 🙂

Did you like it?  Why (not)?
I liked it a lot 🙂  The pictures were also very good, and they were either very funny or quite surprising.  I liked the book because all of the friends Pluck makes are very different, but he still finds a way for them all to get along together.  For example, who would have thought that a seagull with a wooden leg would make friends with a girl whose mum doesn’t even let her take a step out of her apartment?!

What was your favourite part?
My favourite part was when Pluck sent Aggie, who was sick with the measles, liquorice and ice-cream and lots more lovely things – every day!!!

Was it difficult to read?
No, not really.  Although it was long, there were pretty awesome pictures to make it interesting.

Would you recommend this book to other boys and girls?  Why (not)?
I’d recommend it to people who like visits to the seaside, tow trucks and long horses who are afraid of letting people sit in the middle of their back in case they sag 😉

Emily, thank you very much.

*****
When I first heard about this book, I was rather excited as Annie M.G. Schmidt’s The Cat Who Came in off the Roof is arguably Emily’s favourite of all the books she’s reviewed so far.  However, when I found out more about it, I was a little unsure, with the book seemingly pitched at a younger audience (in fact, I suspected it might be more suitable for my younger daughter), with illustrator Fiep Westendorp’s name prominent on the cover.  Fortunately, though, Emily fell in love with the book immediately.  This was probably partly because it’s a beautiful object in its own right, a large hardcover book with colour pictures on every second page or so, but my little helper was also taken with the story, an offbeat tale of a helpful boy and his rather unusual friends.

From the start, Pluck, a young boy with a little red tow truck, encounters a selection of people and animals on his travels.  On the first page, he’s searching for somewhere to live, and it’s a pigeon that informs him of a vacant flat nearby:

‘I’m Dolly,’ the pigeon said.  ‘And the Pill Building’s close by.  That great big building over there…  See?  Right up on top, there’s a little tower.  And in that tower, there’s a room.  And no one lives in it.  If you’re fast, you can move into that room.  But don’t waste any time, otherwise it might be taken.’
‘Thanks,’ said Pluck, and he hopped into his tow truck and drove to the Pill Building.
p.7 (Pushkin Children’s Books, 2016)

Luckily for Pluck, no one has beaten him to the room, and within a few pages, he’s made himself at home, settling nicely into the neighbourhood, and picking up a talking cockroach as a roommate for good measure (it’s a long story…).

This is just the start of his adventures, told in a charming manner in a story divided into around forty short chapters, cunningly designed to be perfect for bedtime stories for younger children.  It’s a funny, slightly disjointed narrative, reminding me in its acceptance of the illogical of another of Emily’s recent reads, María Elena Walsh’s An Elephantasy – which is probably why it went down so well!  With an entertaining story, the ever-present Westendorp illustrations and David Colmer’s excellent translation, this is another book that will take pride of place in my assistant’s bookcase.

Tow-Truck Pluck is slightly hard to place in terms of what age group it’s best for.  If your little one is old for their years and thrives on tales of the supernatural with death lurking around every corner, this might seem a little babyish.  For children who still enjoy simple flights of fantasy, though, this would be a great choice, and I’m tempted to see if Emily’s younger sister would like to have this read to her.  Better still, with all the reading she’s been doing, perhaps it’s Miss Emily’s turn to take over bedtime story duties 😉