Over the past two days (here and here), I’ve attempted to share a little of my knowledge about Korean fiction by suggesting twelve books and authors that the average reader might enjoy.  However, that’s far from the end of the story with Korean literature, and today’s post will fill in some gaps, introducing a few names who you might wish to get acquainted with once you’re a little more au-fait with the country’s writing.  There may not be anything new here for Koreaphiles (Koryophiles? Chosonphiles?), but for everyone else, these are all writers worth checking out 🙂

*****
I wouldn’t say the selections in my top twelve are all mainstream, but they were chosen with a

certain type of reader in mind, which led me to rule out a couple of more off-beat writers.  One of the most bizarre selections from the Dalkey Archive Library of Korean Literature was Haïlji’s novel The Republic of Užupis (translated by Bruce & Ju-Chan Fulton), a mind-bending work in which a man seeks to find the country of his birth.  It’s just a shame, then, that it doesn’t seem to exist… Speaking of bizarre, Jung Young Moon’s circular style of writing might not be to everyone’s taste, but those willing to let themselves go in his whirl of words might find his story collection A Most Ambiguous Sunday (tr. Louis & Inrae You Vinciguerra and Jung Yewon) to their liking.   And if you enjoy that, why not try a couple of novels that have recently appeared in English, Vaseline Buddha (tr. Jung Yewon) and A Contrived World (tr. Jeffrey Karvonen & Mah Eunji)?

However, there are slightly more orthodox writers who didn’t make my list.  Cho Chongnae is an extremely popular writer of multi-volume epics (not available in English), and while he’s not the best stylist around, he does choose some interesting topics.  How in Heaven’s Name is a short novel tracing the unbelievable journey of some Korean soldiers in World War Two, following them from Korea to China to Russia and beyond.  Meanwhile, The Human Jungle is a three-part work, released as a single volume in English, providing a Korean view on China’s modern economic miracle.  Another big name of post-war Korean writing is Hwang Sunwon, and while he’s perhaps best known in English for his short stories (including the oft-translated piece ‘A Passing Shower’/’Shower’/’Cloudburst’),  novels like Trees on a Slope and The Moving Fortress are also worth a read (all of these books have been translated by the indefatigable Fultons).

A popular form of literature in Korea is the linked short story format, and I’ve read two 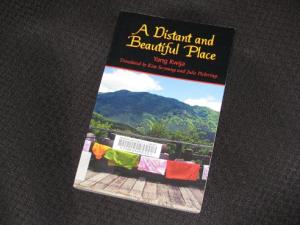 lauded examples of the genre, which both deal with the negative side of the country’s rapid economic expansion in the decades after the Korean war.  Cho Se-hui’s The Dwarf (tr. Bruce & Ju-Chan Fulton) is a classic collection, outlining the hardship faced by the lower levels of Seoul society, represented in one ‘little man’, the dwarf of the title.  Cho describes the country’s inequality graphically, and while in Yang Gui-ja’s A Distant and Beautiful Place (tr. Kim So-young and Julie Pickering) the characters are slightly better off, the residents of the writer’s imaginary suburb still get the raw end of the deal when it comes to life in the big city. 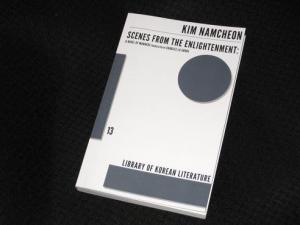 Another area I largely neglected in my original posts is ‘classic’ (i.e. colonial-era) literature, as few of the books I’ve sampled from this period would make good starting points for the novice reader.  A couple of more readable selections are Kim Namcheon’s Scenes from the Enlightenment (tr. Charles La Shure), an excellent Hardyesque tale of a family in a country town, and Yi Sang’s bizarre novella/long story Wings (tr. Walter K. Lew and Youngju Ryu), the tale of a hen-pecked, slightly crazed writer who rarely shows his face in public.  Kim’s book is yet another from the Dalkey range, while Yi’s story is available in the Modern Korean Fiction collection.

Going back to the very start of the modern era, there are a couple of writers regarded as

fathers of modern Korean literature.  Yi Kwang-su’s Mujong (The Heartless, tr. Ann Sung-Hi Lee) and The Soil (tr. Hwang Sun-ae and Horace Jeffery Hodges) might be a little two-dimensional and stilted for modern tastes, but Yi (a writer with a controversial background, including collusion with the Japanese overlords…) is an important figure in Korean writing, and his work provided templates for many later authors (and K-Drama scriptwriters).  Meanwhile, Yom Sang-seop’s Three Generations (tr. Yu Young-nan) is a surprisingly effective novel showing the changes in Korean society through a relationship between a modern woman and a man tempted to conspire against the Japanese.  Of course, if it’s classics you want, then The Story of Hong Gildong (tr. Minsoo Kang), a nineteenth-century rendering of the fable of a Korean Robin Hood figure (with magical powers to boot) is a book I’d highly recommend 🙂 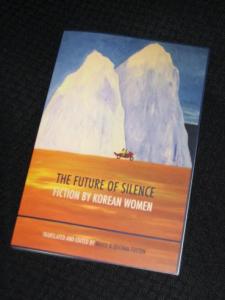 That’s plenty in itself, but there are a few more suggestions I’d like to make.  There are a number of anthologies out there, of which the aforementioned Columbia University Press Modern Korean Fiction volume is probably the most complete, but I’m hoping for a more modern anthology at some point as many of the collections available tend to be weighted towards early writers.  There are also several books out there featuring female authors.  Waxen Wings comes highly recommended, but I enjoyed both Wayfarer and its updated edition, The Future of Silence, which introduced several great new writers to pursue.  If you look hard enough, you can find many more collections, but one problem (aside from the focus on older stories – and some poor translations) is that there’s often a lot of repetition, with certain standard stories revisited again and again…

Finally, if all else fails, you can just forget the names and let the publishers do the talking.

While the Jimoondang Portable Library of Korean Fiction no longer appears to be readily available, you can still pick up some of the twenty-five short books online (or stumble across them in university libraries…), but the two collections from ASIA Publishers – the older Modern Literature titles and the newer K-Fiction series – can all be bought on Amazon, even if not everyone will benefit from short stories with parallel Korean text.  Of course, for most English-language readers, a much easier introduction to Korean literature is provided by Dalkey’s Library of Korean Literature.  Despite some issues with the series (a couple of the books suffer from poor translations and proofreading, and the titles haven’t really been publicised as much as, I suspect, LTI Korea would have liked), it’s hard to go past the collection (twenty-six books to date) as an easy first step for the average reader.

*****
And that’s all he wrote – three posts full of suggestions as to where to begin (or continue) your K-Lit journey.  I hope you’ve found inspiration over the course of my scribbles – please let me know if any of these books sound like your cup of tea 🙂