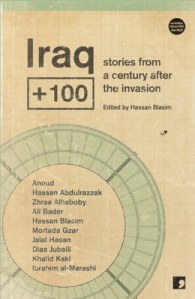 Choosing what book to read next is a complicated process for me at times, a juggling act based on what I feel like reading, what my shelves tell me I should be reading and any blogging events that might happen to be on in the background.  However, when it came to selecting my first read for February, the decision was virtually taken out of my hands, with events in the US pushing me towards my Kindle.  Today’s choice is a book originally commissioned to examine the future of a country where the dust had finally started to settle – by the time I got to read it, it was a very different story indeed…

*****
Iraq +100 – Stories from a Century after the Invasion is yet another of Comma Press’ wonderful short anthologies introducing readers to literature from around the world (c.f. The Book of Tokyo, The Book of Khartoum etc), yet it’s a very different book to the usual offerings.  Edited by IFFP-winning author Hassan Blasim, the collection brings together ten Iraqi writers, writing in English and Arabic, to imagine life in Iraq in 21o3, a century after the American invasion of the country.  In his foreword, Blasim explains how Iraqi writing has been light on speculative or science fiction in recent times, understandable given the country’s history (there are plenty of current issues to work through without worrying too much about the future…), and Iraq +100 gives the writers an opportunity to fill that gap, and imagine how their country will look in a hundred years’ time.

There are a number of imaginative pieces presented here, not least among them Blasim’s own contribution ‘The Gardens of Babylon’ (translated by Jonathan Wright).  With Iraqi cities protected from the harsh climate by Chinese-built geodomes, water rebels protesting against the unequal allocation of resources and technological advancements including robotic insects that can provoke hallucinations, it’s certainly a far cry from stories of the recent Iraqi wars.  It’s a little self-indulgent at times, with Blasim placing himself at the heart of the story, but overall it’s a clever take on where society might be going.

However, other stories are more closely connected to today’s world, and several of them feature religion prominently.  The opening story, Anoud’s ‘Kahramana’, sees a beautiful woman from an archaic Islamic Empire in the north of country fleeing her arranged marriage to the state’s leader, only to be used for propaganda purposes.  Meanwhile, Diaa Jubaili’s ‘The Worker’ (tr. Andrew Leber) takes us to Basra, where the Governor (a smooth-talking Trumpian religious leader) deflects attention from the pitiful state of his city by explaining how things are worse elsewhere – and in the main square, beneath the big-screen broadcast of the speech, a familiar figure does its best to clean up the corpses.

The religious theme isn’t always negatively portrayed, though.  Ibrahim al-Maraishi’s ‘Najufa’ follows an American Iraqi’s pilgrimage to a famous shrine.  As the doctor is taken through a high-tech Iraq which coexists peacefully with its religion and traditions, his grandfather rattles on endlessly about his own father’s journeys back at the start of the twenty-first century.  It’s only when they reach their destination that the grandson realises why the old man has decided to finally make the journey himself, and technology proves to be part of the answer.

Ali Bader’s ‘The Corporal’ (tr. Elizabeth Jaquette) turns the religious idea on its head somewhat in one of the most entertaining pieces in the collection.  In a two-part tale, a soldier in Saddam’s army is shot dead at the very end of the war, but manages to get himself sent back down to earth by God (hitching a lift from an angel in the process).  A century on, he finds himself in a utopian Iraq free of religion and strife, but that’s more than you can say for other countries:

“…What you’re saying is hard to believe.  Has America given up on democracy?”
“Yes, America is a rogue state now.  It’s part of the axis of evil.  The civilised world is trying to bring the country back to its senses and bring back a democracy…”
‘The Corporal’, p.57 (Comma Press, 2017)

It’s meant to be an ironic twist in the tale, but given recent events, what started off as tongue-in-cheek fiction is fast becoming dry fact…

Iraq’s future isn’t always painted so brightly, and there are a few dystopian versions included in the collection.  In Khalid Kaki’s ‘Operation Daniel’ (tr. Adam Talib), the city of Kirkuk has become a Chinese Protectorate where people are forbidden to use native languages (with the threat of being turned into jewellery hanging over them…).  There’s an even worse fate in store for us all in Hassan Abdulrazzak’s ‘Kuzib’ – a couple’s night out, sampling food and wine at a trade fair, takes a sudden turn:

Ur tasted the wine.  It was the familiar sort, the type he could obtain easily at his local market.  He formulated his next question carefully, before asking with confidence:
“What kind of humans is this made out of?”
“It’s from the blood of locals,’ the old merchant replied in a lacklustre voice, clearly unimpressed with Ur’s rather unrefined question.
“Perhaps you should be asking, rather, what they were fed on?” he suggested.
“Er, yes, precisely,’ Ur blushed.
‘Kuzib’, p.118

Yes, the aliens have taken over, and we’ve all become tasty morsels for the new overlords…  ‘Kuzib’ is a clever story that plays with our feelings, creating telling parallels with our own treatment of animals and asking the question of how important our ethical doubts are when set against our desires.

While I enjoyed most of the stories in Iraq +100, not all of them really hit the spot.  Jala Hassan’s ‘The Here and Now Prison’ (tr. Max Weiss) starts off well, but like its protagonists ends up lost in its own twists and turns.  As for Mortada Gzar’s ‘The Day by Day Mosque’ (tr. Katherine Halls), if anyone can tell me what the writer wanted to say with his story of snot and aged vinegar, I’d be much obliged…

Both of the stories above attempted to combine the past and the future, but one of my favourite stories here, Zhraa Alhaboby’s ‘Baghdad Syndrome’ (tr. Emre Bennett) does so far more successfully.  An architect afflicted by a new genetic disease especially prevalent among Iraqis uses a side-effect of hallucinogenic dreams to help him in his final commission, to build a city square.  The story manages to integrate elements from the future (holoscreens), our present (mining social media for clues) and the past (a familiar Arabic-language tale) to help the main character track down a missing statue and create a symbol of the country for all to enjoy – even if he won’t be able to appreciate it fully himself.

*****
Iraq +100 is a mixed bag, with some stories more successful than others, but overall it’s an entertaining selection, even if (like me) speculative fiction isn’t really your thing.  The anthology was originally commissioned in peace time, and the subsequent rise of IS explains the different tone of some of the stories.  Of course, the situation has changed once more with the Trumpian decree to ban citizens of seven countries (including Iraq) from entering the US, but Comma Press’ response has been typically ebullient, with the publisher committing to only publishing books from those seven countries in 2018.  Ah, changes…

“We’ve changed so much,’ Samir mused, as if asking himself a question.
“The world changes and all we can do is try to keep up,” Helen offered.
“But have we changed for the better?” Samir asked.
Neither of them spoke.
‘The Here and Now Prison’, p.148

It’s a question that occupies most thinking people (which is not the same as saying all people), but writers grapple with the dilemma more than most.  I wonder if recent events have any of these contributors rethinking their ideas about Iraq’s future – perhaps volume two is already in the planning stage… 😉