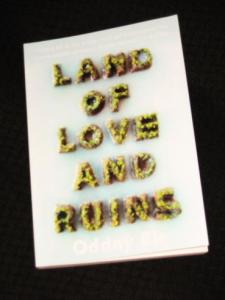 For several years now, I’ve had a soft spot for Icelandic writing, with books by Sjón and Jón Kalman Stefánsson among my favourite discoveries.  However, there are several high-profile female Icelandic writers too, and Oddný Eir is one of the latest to have her work translated into English.  Today’s choice is a fascinating work, half-novel, half-diary, taking us from the volcanic lava fields of the writer’s home country to Paris and the Lake District – and back again.  It’s about love, archaeology, bird-watching and rebuilding a country shattered by financial disaster, all tied up in a rather personal story.

*****
Land of Love and Ruins (translated by Philip Roughton, review copy courtesy of Restless Books) sees the writer, a woman in her late thirties, returning home after time abroad.  In a series of diary entries, she records the start of a new stage of her life, one in which she travels around her homeland, often in the company of her new partner (the aptly nicknamed Birdy – an ornithologist).  As she starts to work on her writing, she attempts to reconcile her craft with her relationship, finding time for both when she can.

At heart, she’s a wanderer, travelling at home and abroad for inspiration, yet she’s also constantly on the hunt for a place to set down some roots.  In doing so, she is forced to look back into the past, seeking out stories about her family and learning more about the history of her country.  However, she also has one eye on the future, as recent events, in particular the destruction wrought on Iceland by big business, have shown the need to stand up against those running the country down, and it’s up to those ignored by the previous leaders (women and writers) to effect change.

Land of Love and Ruins is an enjoyable, hybrid sort of book.  As the diary format hints, it’s fairly autobiographical, using the writer’s own experiences to shape the story she wants to tell.  Much of the novel takes place under the expanses of the Icelandic sky, and reading the book certainly feels like an open-air experience at times.  Yet there’s also a lot here about finding a spot to crawl into when the elements become overpowering, a nest in which to hide away from the outside world.

One of Eir’s central concerns is her life as a writer, and literature pervades the book, with poetry and stories from sagas scattered throughout (a very bookish nation is Iceland, where reading is as normal as breathing…).  Of course, there’s a strong focus on her own work, with the writer quoting Greek philosophy in support of her lifestyle:

Aristotle said that someone who intended to ponder wisdom and write could not live a family life; he would have to drag himself away from the city.  The image of a hermit is of a crippled old man who walks with a staff and a lantern out into the desert.  Goes there alone to think, until he finds the solution to the riddles of life.
p.87 (Restless Books, 2016)

Alas, the modern world is very different, and her need for space (and time) to write, a room of one’s own, if you will, causes problems in her nascent relationship.  With her partner writing as well, their differing habits and schedules make living together a trial (especially for him as she’s rather messy and disorganised).  The two are reduced to making appointments for breakfast and sex, leaving her dreaming of Anaïs Nin’s solution to this problem – two houses…

However, as much as she loves peace and quiet for her writing, Eir also needs people around her at times, especially her family.  She spends her free days travelling around Iceland in a search for her roots, visiting relatives and seeking out stories, but she shares a particular bond with her brother, an archaeologist specialising in unearthing ancient buildings.  This love between siblings is a recurring theme of the book, and when the writer makes a pilgrimage to Cumbria, she discovers that the Wordsworths were a family after her own heart.

As personal as Land of Love and Ruins is, though, what gives the book its edge is the connection between the writer’s concerns and those of the wider world.  Along with her brother and her lover, she explores the beauty of Iceland, finding out more about its past as she uncovers the ancient buildings, in doing so finding inspiration for her own perfect home.  She grows to love the generosity of the countryside, but not everyone sees it:

People from town view the land beneath summer cottages as plots, not the earth.  A unified vision of the land has been lost.  Our relationship with nature needs to be renewed, our connection to the future.  In this prolonged limbo and uncertainty, we’re lacking a vision of the future.  And I’m talking about Iceland as a whole.  And about myself as part of the whole… (p.123)

There’s a lesson here of a need to look back and learn, lest the wonders of the past are buried beneath the push for progress.

Of course, there’s a reason for these urgent pleas, and another of the themes of Land of Love and Ruins is the GFC and the way the country’s bankers have led Iceland down a dangerous path.  Big business has let the country down, and people (often women) like the writer and her friends are determined to find a new way to live, progress without destruction, and it’s here that the themes of the novel come together.  The overarching vision is for a community where men and women work together, caring for the environment, ensuring that past and future remain in harmony.

Land of Love and Ruins is a lovely book to while away a few days with, and Philip Roughton (who also translates Stefánsson) has brought his usual light touch to proceedings.  The short sections make it a perfect book to dip into if you’re that way inclined, and it could certainly be read at a relaxed pace.  It is a very personal work, but one where the personal touch expands into the public sphere:

Now I’m chatting with myself in solitude, calming myself down after the hullabaloo; we discussed so much, with such passion, and drew up countless possible paths to take apart from the ones that are now being taken without consulting the nation.  It can be so exhausting, trying to come up with ideas on what would be best for the nation. (p.49)

Exhausting, yes, but rather important too.  Land of Love and Ruins can be read on one level as a call to take care of our past before it’s covered beneath the concrete of the future – and you don’t have to be Icelandic to heed that call.