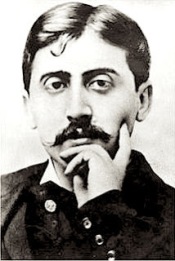 My attempt at reading Marcel Proust’s novel À la recherche du temps perdu (In Search of Lost Time) has been a long journey, starting several years ago, and this month finally saw me complete the fourth stage of my ascent of the mountain.  While never really flat, the previous stages were generally manageable, and I enjoyed myself along the way.  However, on this latest climb, I have to admit that I was starting to feel the lack of oxygen; for a variety of reasons, this section felt very, very steep – let me explain why…

*****
Sodome et Gomorrhe (Sodom and Gomorrah) picks up where Le Côté de Guermantes left off, with Marcel at the Guermantes, trying to find out if he’s really invited to a massive social occasion chez the Princess de Guermantes.  Naturally, being the darling of society that he is, all is well, and much of the first part of the book takes place at the event, allowing him (and us) to spend the evening in the company of old friends – chatting with the Guermantes, gasping at the reappearance of a rather feeble-looking Swann, and making up with the Baron de Charlus after their earlier tiff.  Be warned, though: this is just the first of many parties, so pace yourselves…

As the title suggests, however, this installment of the novel takes a rather different turn, as Marcel catches the Baron with an attractive young man, if not in flagrante as such, then with just a thin wall between himself and the lovers:

It is true that these sounds were so violent that if they hadn’t constantly been echoed an octave higher by a parallel wail, I might have thought that one person was slitting the throat of another right next door and that afterwards the murderer and his resuscitated victim had taken a bath to wash away all traces of the crime.
*** (my translation)

The young man’s eyes are opened to the existence of same-sex relationships, and several parts of the book explore his fascination with the Baron and his affairs.  However, in typically selfish fashion, the theme of homosexuality only really affects our self-obsessed friend when his on-off relationship with Albertine is threatened (in his head…) by her closeness to the beautiful Andrée – Sodom and Gomorrah indeed…

Sodome et Gomorrhe is a novel of both society and intimacy, with Proust describing in minute detail the way people act in public.  In the glittering soirée at the royal Guermantes’ palace, we see the cream of society, observing the upper classes as they go about what seems to be a strange mix between duty and pleasure, the tension of preserving a hard-fought rank barely concealed beneath charming smiles and heaving bosoms for some of the less popular visitors.  However, later on we see a rather different style of soirée when the Verdurins, who played a major part in the opening book, Du côté de chez Swann, hold their own daily gatherings on the coast, more lively affairs, perhaps, but populated by a slightly lower class of guest.

Yet part of the skill of the novel is the way these public façades are compared with how the characters act in private.  Perhaps the best example of that here is to be found in the character of the Baron, a lion of society who snubs people as a matter of course.  Once we get behind closed doors, though, it can be a different story, with his latest conquest, the musician Morel, having a growing hold over him.  It’s isn’t only the gay characters who have to reconcile the two parts of their life, with several of the noblemen acting as good husbands in public while smiling in the direction of their latest lovers, discretely seated in a far corner.

Reading À la recherche du temps perdu can be a strain at times.  There’s a lot to be said for descriptions of balls and the like, but it can pall after a while, and in Sodome et Gomorrhe, Proust is really stretching the friendship.  Trivial conversations go on for hours, and it takes thousands of words for Marcel to detach himself from an unwelcome partner; just when you think it’s time to leave, someone touches you on the arm in the hall and another twenty pages crawl by.  If somebody could just get me my coat…  That’s nothing, though, compared to the agony that awaits when we get to the Verdurins’ less elegant gatherings.  The dinner that starts the second half of the book seems to play out in real time (with my speed of reading French, it probably did…), and even Marcel appears bored at times with the dull conversation.  I was envious of one character, a doctor’s wife who was unable to stay awake and continually drifted off in her armchair.  Believe me, I know how she felt.

As always, our narrator is a delight to behold, an arrogant, chauvinistic, jealous mummy’s boy who (inexplicably) is loved by all and sundry (I still don’t really get why – my latest theory is that he’s very rich and incredibly good-looking).  Arrogant to the point of rudeness (and far beyond), he even commands his friends only to visit him when he wants it.  The worst aspects of his nature come together in the way he treats Albertine, demanding she be at his beck and call, jealous of anything and everything, and unwilling to countenance the slightest hint of individuality.  When the idea that she might be interested in women crosses his mind, he immediately does everything he can to cut off her contact to all her female friends.

Sounds grim, right?  So why on earth should you read it?  Well, just because Marcel is completely unbearable, it doesn’t make the story any less interesting.  Having already invested so many hours in the work, the average reader will enjoy the slow development of the plot and the fleeting appearances of characters from earlier volumes.  Themes are slowly beginning to be fleshed out – homosexuality and the Jewish question, of course -, and there’s a joy in watching the many parallels, or echoes, emerge in some of the most prominent relationships (Marcel and Albertine, Swann and Odette, the Baron and Morel).  There are also large doses of dry humour to enjoy, even if it can be rather cruel at times.

And of course, despite some of the dross, the writing can be sublime, particularly when the writer allows us to dip beneath the surface and see his younger self’s real emotions.  The return to the seaside town of Balbec, scene of much of À l’ombre des jeunes filles en fleurs, has Marcel reflecting on changes in his life – and suddenly, the memory of his previous visit with his grandmother overwhelms him:

…and in this way, in a mad desire to throw myself into her arms, it was only at this moment – more than a year after her funeral, owing to this anachronism that so often prevents the calendar of facts from coinciding with that of feelings – that I had just realised that she was dead.  I had often talked about her since that time, and thought of her too, yet beneath the words and thoughts of a young male ingrate, egoistic and cruel, there had never been anything resembling my grandmother, because in my levity, my love of pleasure, my being accustomed to seeing her ill, I held within myself only in a theoretical sense the memory of what she had been. ***

It’s these passages that make the journey worthwhile…

If I were to summarise the plot simply, it would appear that very little happens in Sodome et Gomorrhe, yet the slow handling means that it feels as if the world has turned a lot by the end of the book.  With four of the seven parts read, for the first time I feel that I’m actually likely to finish the whole novel, and I’m keen to push on and see how the story continues.  Not just yet, though.  There’s only so much socialising I can take, and I’ve already got a busy couple of months ahead.  Let’s see if I can pencil in some free evenings to plunge back into Parisian society later this year 🙂