While today’s selection from the Man Booker International Prize longlist is by a French writer, it’s Vienna that we’ll be visiting, to make the acquaintance of an erudite man with a touch of insomnia.  However, we’ll be travelling much further vicariously, exploring Tehran, Istanbul and Aleppo before the night is done – oh, and there’ll be some music too.  East or West, city or desert, past or present, one thing is certain, though: when the love of a woman is involved, there’s always a chance of losing our bearings…

*****
Compass by Mathias Énard
– Fitzcarraldo Editions, translated by Charlotte Mandell
(electronic review copy courtesy of the publisher)
What’s it all about?
Austrian musicologist Franz Ritter is alone in his apartment in the middle of Vienna, gazing out of the window as his ageing upstairs neighbour takes his dog for a walk, and then listening to the sounds of the old man preparing himself for bed.  Franz too would like to turn in for the night, but for several reasons sleep is to prove elusive.  For one thing, he’s worried about an illness he may (or may not have); and then there’s the recent post from half-way around the world, the latest signs of life from Sarah, a woman close to Franz’s heart.

With little chance of rest, the academic passes the night in the company of his memories, reflecting on life, love, music and (especially) the mysterious east.  His studies have taken him far and wide, yet he has ended up back in his home town, luckier perhaps than many of the people described in his memories.  Nevertheless, as we trawl through his stories, meeting a vast array of characters, some more famous than others, Sarah’s name constantly recurs, leading us to wonder whether Franz’s condition may be nothing more (or less…) serious than a broken heart.

My introduction to Énard’s work came in the form of the majestic Zone (criminally overlooked for the 2015 IFFP longlist), and Compass is a very similar work in many ways.  We’re not restricted to one sentence this time, but the writer still offers up a lengthy, quasi-stream-of-consciousness novel taking the reader in several directions, plunging us into the midst of a story, before dragging us back to Vienna and Ritter’s search for his slippers.

The location is no coincidence, as early on Vienna is described as the gateway to the east, setting the scene for the journeys to come.  Franz’s first meeting with Sarah is at a conference held in a famous Austrian castle, where he discovers an Arabic blessing above the entrance.  We see the academic becoming ever more fascinated by the East, and he eventually moves on to Istanbul, before heading to Iran for further studies.

The key to the novel, if there is one, is the oft-stated impossibility of ever knowing the real orient:

It’s to Lucie Delarue-Madrus that we owe this extraordinary phrase: “Easterners have no sense of the Orient.  It’s we Westerners, we Roumis, as the Muslims call us, Christians, who have a sense of the Orient. (I mean the Roumis, still quite numerous, who are not boors.)”  For Sarah, this passage all by itself summarizes Orientalism – Orientalism as reverie, Orientalism as lament, as a forever disappointing exploration.
(Fitzcarraldo Editions, 2017)

Franz (or Énard) argues that all art which attempts to bring across a taste of the east is fake, a simple facsimile of the ‘other’ – which has never stopped people trying of course.  One of the more noticeable features of Compass is the list of greats (Balzac, Liszt, Sheridan le Fanu, Goethe, Anne Marie Schwarzenbach) making cameo appearances, with the writer revealing their connections to the Orient.  Some simply incorporate eastern elements into their art while others become far more involved, seeking to become part of a new world – which not infrequently ends rather badly.

This is something that also happens to several of the people Franz knows personally, with the pages of Compass littered with the sad stories of western academics who venture to Iran and Syria.  There are parallels with colonialism and the desire to explore, and Franz sees his counterparts go to ground in a number of ways.  One example can be seen in Marc Fougier’s opium and sex addiction, the Frenchman eventually returning home a nervous wreck.  Perhaps a more serious case, though, is that of Frédéric Lyautey, who under his assumed name of Farid Lahouti goes native in Iran at a rather inopportune time (and suffers the consequences).

However, as much as Compass examines the divide between east and west, and doomed attempts to bridge this gap, it’s also very much a love story.  Franz’s connection with Sarah is clear from the start, but the writer strings the reader along a little with hints of a fatal misstep Franz makes which damages his chances of ever striking up a real relationship.  She appears as an unattainable beauty, far out of the poor musicologist’s reach, and his unrequited love for her is compared with the wider desire shown throughout the work for the ‘other’, that which we cannot have.

The novel returns us to the familiar mesmerising style used in Zone, with long sentences and a 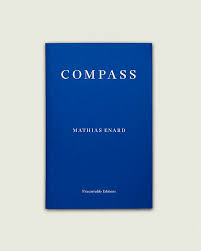 mixture of dreams and memories never quite allowing us to be sure of our bearings.  One minute may see us in a tent in the Syrian desert while the next takes us back to 19th-century Vienna (or just Franz’s living room).  It also looks at history and contemporary affairs, contrasting the Iranian revolution and current events involving ISIS in Syria.  Yes, it can be hard to follow at times, but it’s certainly worth the journey if you do last the distance.

The compass of the title is a recurring theme, with both the narrator and his friends glad of a little guidance:

…that’s the superiority of the Muslim over the Christian: in Germany they impose the Scriptures on you in the back of the beside table drawer, in Muslim hotels they stick a little compass for you into the wood of the bed, or they draw a wind rose marking the direction of Mecca on the desk, compass and wind rose that can indeed serve to locate the Arabian Peninsula, but also, if you’re so inclined, Rome, Vienna, or Moscow: you’re never lost in these lands.

Many of the compasses featured here are used as decorations, but our friend also has a trick compass he received as a gift, one pointing in a very different direction.  This is certainly a novel where all roads lead east, but Franz’s inbuilt compass only has one point of reference – and that’s Sarah…

Does it deserve to make the shortlist?
Yes, I think so, even if I wouldn’t say this is up there with Zone.  Compass doesn’t always flow that well, and it’s easy to get bogged down by the large amounts of theory and history (my lack of familiarity with music and Arabic culture probably doesn’t help here).  Despite that, it’s an excellent read, and there’s a good chance that it will end up in my top few.

Will it make the shortlist?
It wouldn’t surprise me at all.  It’s certainly not a page turner, but I think this panel have shown in their longlist choices that they appreciate serious books.  I expect to see Énard in his tux at the awards ceremony – and he might even be picking up the trophy…

*****
It’s time for Franz to get some well-earned rest, so we must quietly tip-toe out and move on to our next destination.  We’re off to Jerusalem, where another man of an academic nature is fated to long for a woman who may not love him.  Still, he has plenty to keep him occupied while he muses on his desires: hours of conversation with his old landlord/employer and his research into Jewish thoughts on Jesus – and a most unlikely disciple…