After wrapping up our Chinese excursion, today’s literary journey sees us heading to Istanbul, to a little square inside the imperial capital where the citizens are provided with frequent reminders of the price of disloyalty.  However, much of our latest Man Booker International Prize longlist adventure takes place in Albania, so it’s time to pack our bags once more (and don’t forget to bring some warm clothes…) – it’s time to see whose head is the latest to fall…

*****
The Traitor’s Niche by Ismail Kadare
– Harvill Secker, translated by John Hodgson
What’s it all about?
We find ourselves in Istanbul towards the start of the nineteenth century; more specifically, in a certain square with a certain little niche in one of the walls, a small space reserved for a very public warning:

It was not hard to imagine why this square had been chosen for the niche where the severed heads of rebel viziers or ill-starred senior officials were placed.  Perhaps nowhere else could the eyes of passers-by so easily grasp the interdependency between the imposing solidity of the ancient square and the human heads that had dared to show it disrespect.  It was clear at once that the niche had been sited in the wall to convey the impression that the head’s lifeless eyes surveilled every corner of the square.  In this way, even the feeblest and least imaginative passer-by could visualise, at least for a moment, his own head displayed at this unnatural height.
p.2 (Harvill Secker, 2017)

The current occupant of this lofty position received the ‘honour’ after failing in his quest to defeat a rogue official, the fiery Ali Pasha (or Kara (Black) Ali), but there’s a certain tension on the streets as it is well known that a new head will soon adorn the niche – that of either the rebel or the next commander to attempt his downfall, Hurshid Pasha.

This is where the story takes us to Albania, as it it’s in Shqipëria that Ali has decided to defy the Sultanate, wagering his life on his ability to create an uprising to fight for a free state.  While back home the masses (and the officials) chatter and take bets, on the frontier the battle of wills is on, with Hurshid Pasha determined not to suffer the fate of his unfortunate predecessor.  Meanwhile, a shadowy figure approaches the battlefield, a middling official with only one task.  For him, it’s of little import whose head will fall – he just has to get it back to the capital in one piece…

The Traitor’s Niche isn’t an overly lengthy work, yet it provides an expansive view of an empire at the peak of its powers.  Kadare cleverly uses the conflict at the centre of the work to provide an overview of the workings of the corridors of power while showing the reality of life away from the state’s focal point.  However, he’s just as interested in the personal level, with a keen eye for petty squabbles and the opinions of the man on the street as to the chances of the main protagonists in the latest flashpoint.

The novel provides an impressive overview of a massive bureaucracy with rules for everything from which gate to enter when carrying certain documents (or heads) to the clothes citizens in various provinces are permitted to wear.  The mighty empire can be benevolent, as shown in its preferential treatment of Albania in recent decades, but once its patience is tried, the backlash can be devastating.  Several passages in the book are concerned with the art of ‘Caw-Caw’, or the process of erasing a defiant culture over a period of decades (or even centuries).  The group of ‘special forces’ expedited to the border countries in one chapter turn out not to be elite soldiers, but experts in annihilating a culture, a sign that dark days are on the way for the ungrateful peoples of the empire.

However, in practice it’s not quite as easy as it sounds.  Albania is still around despite multiple revolts, and one of the reasons for Ali’s stand is his dream of reviving its independence and creating a new country – so why isn’t it working?

“Who’s stopping me?” he said.  “Who’s stopping me?  Nobody.”
These last words, although uttered in a low voice, came out in a howl.  This was typical of his speech, which sounded so placid on the surface, but concealed an inner roar.
“Albania itself is stopping me,’ he murmured.  “Nothing else.” (pp.108/9)

Despite his desire to free the people he is ruling, the fact is that he’s not Albanian enough to inspire them to follow him.  They would rather mind their own business and continue to live under Ottoman rule until a true Albanian leader comes along – and that’s likely to lose old Ali his head…

Hurshid Pasha, then, is likely to succeed, but in such a complex and dangerous society, even he has his problems.  Rising to dizzying heights at a relatively young age, the young Pasha (Lord) has his enemies, and while he’s out in the provinces, there’s nothing to stop the rumours spreading around the capital.  Even if all goes well with his mission, there’s no guarantee that he’ll come out of all this alive as unknown voices in the background whisper about Ali’s beautiful wife and hidden treasures that haven’t yet reached Istanbul.  These are very muddy waters, and we’re never really sure who’s pulling the strings behind the scenes. 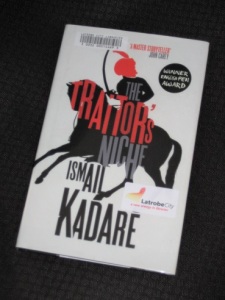 The Traitor’s Niche is beautifully written, masterfully marrying the micro and the macro.  In addition to the matters of state and war, it’s the focus on the minor details that holds our interest, the descriptions of the lesser provinces (lands stripped of names, just numbered, populated by people bereft of language and colour).  There are also a host of individual stories that pique our interest, such as the fate of Ali’s beautiful young wife Vasiligia and the domestic woes of Abdulla, the keeper of the traitor’s niche.  Kadare uses a number of first-person accounts to keep us moving around the empire and between social levels, rarely (if ever) losing our interest.

It may be a short book, but in just a couple of hundred pages, The Traitor’s Niche manges to both describe an empire at the height of its glory and hint at a society on a downward slope, with the flickering hope of a free Shqipëria very much in sight.  It also calls into question the attention we pay to the heroes making history, as it’s those in the background who truly wield the greatest power (as the head-carrier Tundj Hata well knows):

You lofty state grandees pass by us middling officials, unreachable, with contempt in your half-closed eyes, not deigning even to turn your heads.  At state dinners you sit at the top tables in your fine clothes, with your glittering medals, holding your necks straight as only you know how.  Whereas we, the middling sort, barely squeeze around the lowest table, near the guards and servers.  We watch you from a distance.  We watch you, hahaha, hehehe.  We wait for you to fall, we wait to carry you like this under our arms, taking you far, far away.  Faster, coachman, hahaha… (p.43)

It’s as true for empires as for arrogant officials.  Pride comes before a fall, and in the long run, it’s not always the most powerful who survive.

Does it deserve to make the shortlist?
It’ll certainly be there or thereabouts.  It’s wonderfully written (and translated, of course) and an excellent way to while away a few hours, but I’m not sure it’s a book that will linger in the memory.  The Traitor’s Niche will be one of a few books battling it out for the last couple of spots in my personal top six, and I’d be very happy to see it make an appearance on the official shortlist.

Will it make the shortlist?
It wouldn’t surprise me at all to see it chosen, and it has a lot going its way: an author with IFFP/MBIP pedigree, an intriguing story and excellent writing.  What might go against it if the judges opt for a varied shortlist is that it could be pushed out by a few other similar works (e.g. Judas, Fish Have No Feet, War and Turpentine).  Coin toss 😉

*****
Let’s leave the Ottoman Empire (and the nineteenth century) behind now and head off to a region confronting its own recent past.  Our next stop will see us sampling a little night life, but be warned – there may be women and champagne in abundance, but there’s a price to be paid, and it’s not always your wallet that feels the pain…