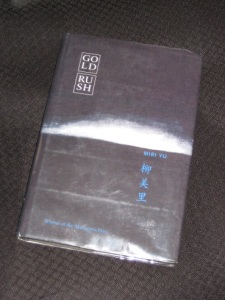 Today’s post is being sneaked in before the end of May, mainly because it seemed apt to keep it together with all the other Japanese and Korean reviews the month has brought.  In fact, even the choice of the month’s final book ties in nicely with that theme as the writer, while living all her life in Japan, is of Korean descent (which basically means that she’s still a foreigner…).  Let’s have a look, then, at an excellent novel about a young outsider struggling to contain his emotions.  As the title suggests, there’s a fair bit of money involved, but (a warning for the delicate) there’s a *lot* of violent behaviour here too…

*****
Yu Miri’s Gold Rush (translated by Stephen Snyder) is, somewhat surprisingly, her only work translated into English thus far, although many of her books are available in other languages, particularly French.  The novel examines the life of a well-off fourteen-year-old, Kazuki, who spends his days skipping school, instead wandering around Kogane-chō, an area of the city children should really be keeping away from.  Having considered the quarter as a second home from a young age (his father’s Pachinko parlour is located there), the boy has a lot of friends looking out for him, and he treats an old couple running a noodle shop as his ‘grandparents’.

Sadly, Kazuki isn’t quite as well-adjusted as he appears, and the first half of Gold Rush slowly reveals the darker side of his nature.  There’s a confronting rape scene near the start of the book, followed by some graphic violence against animals, so it’s no surprise that we are being set up for a turning point in the novel, when the boy decides that it’s time to settle a score with his abusive and controlling father.  With blood on his hands, and millions in cash and gold in the basement, Kazuki is going to have to grow up very quickly if he’s to survive.

The overwhelming feeling I had while reading Gold Rush was a sense of surprise that there isn’t more of Yu’s work in English.  An excellent novel, it’s a very psychological work, based on a true story, but handled rather differently.  In fact, there’s more than a hint here of a modern Japanese Crime and Punishment, with a sulky teenager cast in the Raskolnikov role.  The novel also follows a grand tradition of literature focusing on the darker side of Japanese society, a descendant of the line traced by writers such as Nagai Kafu, Teru Miyamoto, Ryu Murakami and Natsuo Kirino:

To outsiders, the violence and corruption of Kogane-chō were almost audible, discouraging them from coming near.  To the uninitiated, it was a dangerous place to be carefully avoided.  Here, desire had settled in and set up shop.  Other places like this had come and gone with the times, but Kogane-chō had never lost sight of its basic commodities, continuing to offer sex and drugs at a fair price.
p.9 (Welcome Rain Publishers, 2002)

The story dips in and out of the red-light district, taking us to the pachinko parlour, the run-down noodle shop and the dark, narrow streets all around.  However, Kogane-chō is cleverly juxtaposed with Kazuki’s family’s Yokohama home, where the heir to his father’s empire feels like a prisoner.  His strolls around the more down-market areas feel like a breath of fresh air (particularly when the air at home begins to get rather less fresh…).

Yu builds up the scenario carefully, introducing us to the rest of the family.  Kazuki lives with Kōki, the elder brother with a genetic disorder that means he’ll never be able to take over from his father, and his sister Miho, whose rebellion against her father takes a rather surprising form.  Then there are close friends such as Kanamoto, the sympathetic Yakuza, and Kyōko, a young woman with a horrible past.  As they all grow a little closer, Kazuki begins to feel responsible for his little family, believing it’s up to him to protect them from his father and other grown-ups, even if that’s not really his role.

This conflict between children and adults is a central theme of Gold Rush.  Having been exposed to the adult world from a relatively young age, Kazuki thinks he can fend for himself, but the reality is that he can’t really cope with grown-ups.  Every time he tries to pursue his agenda, he’s out-thought, and out-argued, by his opponents, needing the help of others when his plans go awry.  His father’s employees refuse to be cowed by the boy after his father’s disappearance, even if he is the heir to the company, and his father’s mistress leads him on, sensing that she will be able to manipulate him.  The more this happens, the greater his frustration, with inevitable consequences.

The focus of the novel is very much on Kazuki, with the story-line like a camera following him around, occasionally venturing inside his head to observe the signs of madness unfolding:

He felt he could pity even the birds that fly in the sky; but in reality, he had never once cried since the age of four.  If you were unable to surrender to feelings of impotence, tears would not flow.  Tears were just a way of comforting yourself, of wallowing in your own weakness.  But whenever Kazuki sensed weakness in himself, he immediately set up a wall of hatred and anger, and he felt sorry for people who couldn’t build their own barriers. (p.107)

Occasionally, though, the story cleverly switches perspective, jumping to what those around him see in the teenager.  It’s a picture of a kid, an old friend, but moments of anger reveal sudden insights into how dangerous the boy really is.

Gold Rush is superbly written, and Snyder, as always, does an excellent job on a rather atmospheric text.  Yu succeeds in bringing across the colours and smells of Kogane-chō, and there are some wonderful scenes (such as the noodle shop owner’s wife’s wake and funeral).  The pacing is excellent, and where the novel is calm and measured for the most part, Yu can make her story brutal when required, and the sudden contrast can be frightening.  All in all, it’s a wonderful novel of what happens when children aren’t raised properly – or at all.  When people start to suspect Kazuki’s guilt, he’s constantly told that what he’s done, what people think he’s done, is wrong – but why?

Even now, all over the world, countless murders were being committed and no one could stop them, no one was even trying.  The desire to kill came on people like a giant unseen hand, and once it had you, there was no getting away from it.  If it were really wrong to kill, why were the movies and comic books full of such incredible slaughter scenes?  Reality was becoming fictionalized, and fiction was becoming more real. (p.267)

It’s a frightening insight into the fragile barrier separating moral behaviour from violence, and in truth, in spite of ourselves, we’re half wanting Kazuki to get away with it all.  Gold Rush is never unrealistic as we’re only too aware that this really could happen – and that’s the scariest part…