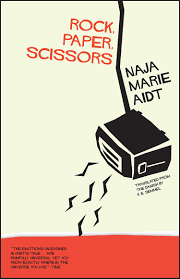 Here is another of the external reviews that I’m bringing across to my blog to celebrate this year’s Women in Translation Month.  This piece first appeared over at Words Without Borders a couple of years back, but it’s about a book that certainly deserves another mention – I hope this reissue of the review will introduce the work to some new readers 🙂

*****
With many readers praising Naja Marie Aidt’s short story collection Baboon (Two Lines Press; translated by Denise Newman), it was not a huge surprise to see the efforts of writer and translator alike rewarded with the PEN Translation Prize earlier this year. Those who enjoyed Aidt’s slices of the darker side of life will be happy to see her vision extended over a broader canvas in her first novel, Rock, Paper, Scissors (Open Letter; translated by K.E. Semmel). This book is centred on the extravagantly-named Thomas O’Mally Lindström, the owner of an upmarket stationery supplies shop, with the story starting after his father, Jacques, an inveterate criminal, has passed away in prison while awaiting trial for an unspecified crime. Thomas and his sister, Jenny, promptly renounce any claim to the old man’s estate (and his debts), preparing instead for the cremation and hoping to put a lifetime of hurt and disappointment behind them.

An unlikely discovery in his father’s apartment, however, is to have unforeseen consequences, and Thomas soon discovers that keeping himself away from his father’s legacy is more difficult than he’d imagined. As his father’s acquaintances, including a young man to whom Jacques was close, begin to circle, Thomas’s comfortable middle-class existence slowly begins to crumble around him:

He can’t control himself; here he is, firmly glued to the same flagstone on the sidewalk, snot barreling down his chin, the tears sounding foreign and loathsome and much too old, the tears are an old man, something beautiful and shiny breaking apart before growing ugly and shapeless, an old man no one wants to look at,  for God’s sake, unarticulated, raw grunts climb up from the depths inside him, and now he wants to scream, his scream will put an end to his shame, but there’s no end to shame, he thinks, and he’s losing it . . .

What follows is a breathtaking, disturbing picture of a man’s disintegration and collapse.

Most readers of Baboon will have appreciated the way Aidt composed a series of spiky, cutting scenes, full of damaged yet compelling characters, and in Rock, Paper, Scissors the writer expands these vignettes into an extended car crash of a novel. From the very first page, we are dragged into Aidt’s world, and given no time to take stock of our bearings:

A man cuts across the street in the city centre. It’s drizzling. The traffic is earsplitting and intense, from shouting to dogs barking, from roadwork to the wailing of ambulances and the cooing of doves, from children screaming in their strollers to the metro rumbling beneath the streets, from hyperactive teenagers to the muttering homeless, from buses to street hawkers. Thomas crosses the street, a thin leather portfolio tucked under one arm, an umbrella under the other, and on his heels a plump, blonde woman hustles to match his pace.

Here, there is a sense of scene setting in the Dickensian manner (“It was the best of times . . .”), and this start is typical of the nature of the book. At times, it is difficult to read, painful yet always compelling. Aidt draws her readers ever further into a dirty, depressing world, in a visceral and frequently breathtaking manner.

The plot, involving the discovery of hidden cash, has thriller elements, and many readers will enjoy Rock, Paper, Scissors for that reason. Yet in truth, it’s much more a psychological piece. The money is merely the catalyst for Thomas’s spiral into mental anguish, exacerbating the problems he already has with his family and his long-suffering partner, Patricia. While he’s happy to be relieved of his father’s shadow, Jacques’s death stirs the tranquil waters of Thomas’s daily life, raising memories from a past he thought he’d left behind.

One of these ghosts from the past is Luke, a minor character at the start who grows in importance as the story progresses. Knowing of Luke’s close links to Jacques (and to Jacques’s shady friends), Thomas can’t help thinking that the young man, an enigmatic figure with a love for fishing and poetry, is deliberately cementing his position inside Thomas’s family circle. In addition to his deepening friendship with Thomas’s niece, Alice, Luke strikes up a friendship with Patricia, one that makes Thomas even uneasier. Increasingly, it looks as if Luke’s presence in Thomas’ life is anything but benign.

One of the more noticeable features of Rock, Paper, Scissors is Aidt’s superb eye for detail, allowing her to create an environment and a mood sentence by sentence. In her depiction of an anonymous, undefined location, a town which could be anywhere in the Western world (with the unusual mix of character names—Kagoshima, Maloney, Ernesto—adding to that feeling), the writer uses small details—damp, mould, the smell of grease—to make the setting as real as possible. This is also true of the dialogue, with Aidt (and translator Semmel) creating believable conversations, replete with awkward, spiteful chatter, particularly in Thomas’s sibling quarrels with the exasperating Jenny and the increasingly fraught attempts to communicate with his partner.

This eye for detail also comes through in the way Aidt characterizes Thomas as he begins to fall apart, his violent outbursts as much a surprise to the reader as to those around him. We are inside his head all the way, watching helplessly as he swings between anger and self-pity:

I’m lonely, he thinks.  I am a lonely fool disconnected from reality.  I’m an old lonely fool who pushes everyone away.  I’ve apparently pushed everyone away.  Even Patricia.  I’m a complete fuck-up.  Here comes the self-pity, and it’s ugly.  Damn, how it reeks.

There’s a slightly claustrophobic feel to the book at times, and the way in which the writer follows Thomas around, utilizing a one-camera approach, certainly adds to that sensation. In fact, it’s tempting, given the Irish names used, to attribute Joycean aspects to Rock, Paper, Scissors, with the central protagonist roaming the streets of his town as he does (not to mention the preoccupation with smells and bodily functions). Then again, the gloom surrounding Thomas might be more accurately described as Beckettian, suggesting that Aidt is channelling a range of literary influences in her own fiction.

Anyone who has read Baboon will have picked up on the similarities in style of the two works, and many of the themes from the earlier book are expanded upon here.  Sex is certainly one of them, with Thomas’s urges described in great detail (and highly relevant to the story). Under great stress, struggling to cope with the changes in his life, his need for sex becomes urgent, necessary, even violent at times, and in a wider sense sex becomes a powerful force in the story, a symbol of power. In fact, in some ways, the undercurrents of sex in the air help to foreshadow the novel’s shocking climax.

Aidt also continues her examination of another prevalent theme from her short story collection, that of the disjointed nature of modern families. As Thomas has spent much of his adult life attempting to avoid his family connections, the scenes where he spends time with his relatives, and their loved ones, are as eye-opening to him as to the reader. These are normal people – messy, overweight, drunk, unattractive, constantly messing up. This, however, is what makes the characters so intriguing; these are the qualities of people who could actually exist in the real world.

Most importantly, though, this combination of brutal characterisation and a fascinating story makes for a compelling novel, a book where you keep turning the pages breathlessly, hoping for a ray of light, even if you’re fairly sure that it will just be the headlights of a truck. This is a sombre story, with Thomas’s sudden revelation typical of Aidt’s tone:

Every single one of these people will die. Every single person, no matter how old they are. The ones babbling cheerfully, clowning around, having a good time, arguing and talking, or lonely or hunted or sad or happy or relieved – even plain joyful – they will all die.  Maybe soon.

There are some moments of happiness in Thomas’s story, but they’re far outweighed by his anger and suffering.  And yet, for all this negativity, Rock, Paper, Scissors is a story you’ll want to keep reading until the bitter (very bitter) end.