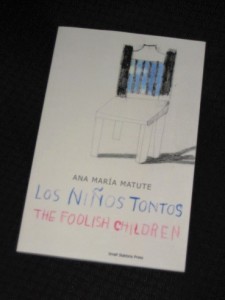 After a rather traumatic trip to Brazil, today’s Women in Translation Month journey takes us back to Spain for a rather shorter and (hopefully) less stressful experience.  We’re looking at a book of short pieces focused on children, but there’s a rather dark side to it all.  You see, while the stories may appear innocent enough, what they conceal is anything but…

*****
Ana María Matute was one of Spain’s most successful modern writers and received the prestigious Cervantes Prize in 2010.  One of her best known works, Los niños tontos (first published in 1956), is a collection of twenty-one micro-stories, the majority of which take up less than a page.  Each of the stories focuses on a nameless child, one of the ‘foolish children’ of the title, with most of the protagonists meeting a grim end within a paragraph or two.

Of course, there’s far more to the work than truncated Grimms’ Tales, and Small Stations Press have brought out a beautiful bilingual edition, translated by María del Carmen Luengo Santaló and Aileen Dever, placing the Spanish and English versions side by side.  In addition to bringing the stories into English, the translators have provided an introduction looking at the writer’s life and career, a note on the history of micro-fiction in the Spanish language, as well some helpful hints for deciphering the stories.

And that’s just as well, as it isn’t always easy to see what the writer is trying to say.  The first piece, ‘La niña fea’ (‘The Ugly Girl’), is a good example of what the reader is up against.  Coming in at a single paragraph of about 200 words, it’s the story of a girl rejected by her classmates for looking different:

However, the story doesn’t really go as you might expect.  It’s a rather strange piece in which the girl hides in the bushes and is spoken to by the earth, with a rather obscure ending – so what’s it all about?

A quick look at the notes provided by the translators shows suggestions of biblical undertones (apple, garden), but more surprisingly, there are some rather less religious allusions.  The flowers that appear in the girl’s mouth towards the end of the story turn out to be from a local ritual for the dead, and as for the ‘cintas azules y moradas en las muñecas’/ ‘blue and purple ribbons on her wrists’ – well, this is actually hinting at bruises and handcuffs…  A final note explains what’s happening here.  Quite apart from ‘ordinary’ prejudice, the story is dealing with the brutality of the Franco era, where people were regularly arrested, beaten, tortured and murdered, and that’s what Los niños tontos is primarily concerned with.  In her twenty-one fable-like creations, Matute is having a subtle jab at the dictatorship she has found herself in, in the only way she knows how.

With this complicated subtext, the stories are more like poetry than fiction, and the writer falls back on certain ideas throughout the collection.  The introduction stresses the importance of colour, which occurs in virtually all of the stories: green, for example, indicates hope for the future, while grey is connected with conformism.  The reader also often encounters the red and yellow of the Spanish flag, and as you can imagine, this rarely has a positive meaning in the climate of the time:

Like many of the children in the book, this boy is destined for an early death, consumed by the fire he created…

However, even those who don’t perish rarely escape unharmed.  ‘El niño que no sabía jugar’ (‘The Boy Who Didn’t Know How To Play’) gives an example of a boy growing up in Franco’s Spain.  He shows little interest in toys, wandering around aimlessly, and while his father (Franco…) is happy that he’s left his childish ways behind, his mother is more concerned.  She decides to follow him and finally discovers how he prefers to spend his time:

Cuando el niño llegó al borde del estanque, se agachó, buscó grillitos, gusanos, crias de rana y lombrices.  Iba metiéndolos en un caja.  Luego, se sentó en el suelo, y uno a uno los scaba.  Con sus uñitas sucias, casi negras, hacia un leve ruidito, ¡crac!, y les segaba la cabeza.
When the child reached the edge of the pond, he squatted down, looking for little crickets, caterpillars, tadpoles and earthworms.  He put them in a box.  Then he sat on the ground and took them out one by one.  With his little dirty nails, almost black, he made a slight sound, crack!, and sliced off their heads.
‘El niño que no sabía jugar’ (‘The Boy Who Didn’t Know How To Play’), pp.86/7

It’s a disturbing image, and it’s clear that Matute is using it to show what growing up in a soulless society can do to you.

Los niños tontos might be a short book, but it’s certainly not one to rush through.  I stuck to the Spanish for the most part, using the English as a glossary of sorts, and I tended to try one story each day, reading them a few times each before turning to the notes.  As mentioned before, it’s a reading experience more akin to poetry than traditional fiction, and if you take your time with it, you’ll see that it can be a powerful work, cleverly constructed and a silent protest against a dictatorship.  Which is, perhaps, one of the main functions of the arts.  In many places around the world (and not just in developing regions), this is a message that is just as relevant today as it ever was…