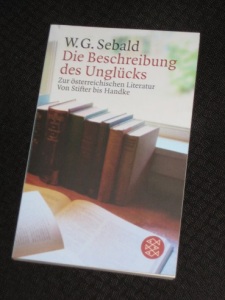 It’s November once more, which for those of us in a certain corner of the blogosphere can mean only one thing – German(-language) Literature Month!  Yes, this year, just like every year, I’ll be turning the blog over to reviews of books from the German-speaking countries, with a variety of writers and genres featured, and today’s post kicks it all off with a look at a book by a rather familiar name.  He was a German writer, albeit one who made his name overseas, but our first trip on the German Literature Month bus takes us to Austria, where a whole host of delights await us – although ‘delights’ might not be the best way to describe our hosts…

*****
Die Beschreibung des Unglücks (The Description of Unhappiness) is a collection of extended essays by W.G. Sebald in which the German ex-pat writer casts his eye over a number of authors and works from another place entirely, namely Austria.  Over the course of ten pieces, most running to between fifteen and twenty pages, Sebald provides a brief overview of his subject’s style while often focusing on one work in particular.  Apart from the nationality of the selected writers, there isn’t really much connecting the pieces, except from, that is, Sebald’s assertion that Austrian writers are a breed apart and for the most part struggle to be, well, happy.

In his foreword, Sebald sets out his intention to examine the phenomenon with a fine tooth comb in an attempt to uncover just what it is that makes the Austrians so gloomy.  Of course, the word ‘Unglück’ has a double meaning, also referring to ‘misfortune’, so there’s a lot for Sebald to consider in his musings.  Interestingly, though, he suggests that his subjects’ obsession with the darker side of life might not always be a bad way to look at matters:

Included in any description of unhappiness is the possibility of overcoming it.
*** (my translation)

Writing about unhappiness as the first step to overcoming it – that’s certainly one way to think about it.

The idea of ‘Austrian’ is a slightly elastic concept, and with his scope stretching back to Imperial times, Sebald looks a little further afield than we might have expected.  One of the essays is concerned with Franz Kafka’s Das Schloß (The Castle), exploring the idea of the book as an allegory of death, and Sebald sees symbols of this idea everywhere he looks.  In a setting where the constant snow removes all background colour, there are a host of parallels with cemeteries, and Kafka’s characters can be seen to be in limbo, or purgatory (which is probably as true for the writer as for his creations…).

Kafka isn’t the only familiar name here, and in any list of grumpy Austrians, Thomas Bernhard is bound to make an appearance.  Of the irascible writer’s many obsessions, Sebald opts to focus here on family, describing a misfortune inherited and nurtured at home, and to explore this further, he looks at the novel Verstörung (the English title is Gargoyles).  This early work features a mad prince and a son who will destroy the father’s legacy, leading our critic to expound upon the overwhelming sense in the work of a world in decline:

At the vanishing point of this development, entropy appears, the definitive condition, in which there is neither form nor hierarchy, nor any other sort of differentiation, where all phenomena of natural life become equal in the consummation of their irreversible degradation. ***

Interestingly enough (or perhaps unavoidably given the Austrian capital’s Freudian history), Sebald identifies sexual issues as the cause of much of this ennui.  Exhibit A is Arthur Schnitzler and his erotic work Traumnovelle (Dream Story), the epitome for Sebald of literature as an obsession with sex, and apparently the first ‘true’ examination of prostitutes in literature (I’ll reserve my judgement here).  An even more daring journey into the abyss is provided by Hugo von Hofmannsthal’s incomplete novel Andreas, a work in which the title character travels to Italy in an attempt to follow his sexual urges.  It’s suggested here that the reason it was unfinished is that the writer lost his nerve while pursuing his desires vicariously…

A couple of writers have the dubious privilege of appearing twice in the collection, namely Adalbert Stifter (mainly for his lengthy novel Der Nachsommer) and Peter Handke (both for Die Angst des Tormanns beim Elfmeter and a variety of other works).  Sebald is interested in the different approach the two writers show, claiming that Stifter escapes from his own issues (including unstoppable gluttony and even latent paedophilia…) by creating an idyll where time seemingly stands still.  Handke’s focus, by contrast, is on language and the effects, not causes, of mental illness, with the writer manipulating the language, displaying it as a phenomenon not to be trusted.  Overall, the comparison between the two writers, at least for Sebald, comes out very much in the modern writer’s favour.

There’s plenty to admire about Die Beschreibung des Unglücks, yet Sebald’s foreword claims are more than a little deceptive as it’s less a coherent book than a collection of essays that happen to have a loose thematic tie.  It worked best for me when discussing works I’d already tried, and when that wasn’t the case (such as in the essay on Elias Canetti), despite my copious notes, I had very little recollection a couple of days later as to what I’d actually read.  The writing is rather dry for the most part, with the usual complex language but little of the fun and lyricism of the author’s (semi-)fiction.  What is more, the reader must also be wary of taking Sebald’s utterances at face value.  When writing about dead white men (and his subjects are all men), there’s a temptation to lay the boot in, and suffice it to say that he doesn’t shy away from this impulse.

Most of his bile is spent, though, on a living writer.  In his critique of Gerhard Roth’s Winterreise, Sebald savages the poor man mercilessly:

With the technical narrative weaknesses in Roth’s prose making themselves noticed relatively frequently, they gradually form an unintended system in the text, depriving the character and reader alike of any freedom of thought. ***

He carefully works his way through a serious of perceived faults, including the rushed pace, the inconsistency of register, the dullness of the writer’s ‘pornographic’ literature and the lack of agency of his female characters.  Having been unaware of Roth’s work, I swiftly turned to the writer’s German Wikipedia page in the expectation of finding an Austrian hack, a Teutonic Dan Brown, even.  No – Roth is a rather well-regarded writer by all accounts, with a host of awards to his name.  Sebald obviously begged to differ 😉

While Die Beschreibung des Unglücks is interesting enough in places, I’d have to say that it didn’t grab me as much as previous Sebald reads (including the other essayistic work I’ve tried, Luftkrieg und Literatur), and I’m not really surprised that there’s no translation into English yet as far as I’m aware.  However, the collection does discuss some interesting-sounding books, many of which I’m tempted to seek out.  There’s also one final essay I’d like to mention, in which Sebald earnestly critiques the (slightly bizarre) poetic work of a certain Ernst Herbeck.  Back to Wikipedia I went, only to discover that he was a man who spent his life in and out of a Viennese mental institution, towards the end of his life producing verse on request.  At which point, you simply have to admit that Sebald was right all along – when it comes to describing Austrian writers, it seems that ‘Unglück’ is the only word for the job…