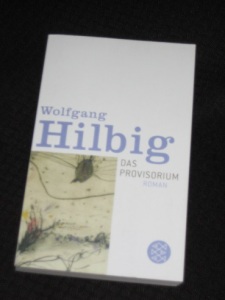 While I do try to use German Literature Month to discover a few new (to me) writers, in truth it’s usually more about returning to familiar authors (as you may have noticed already this month…).  One writer whose work I was keen to get back to after a successful first experience earlier this year was Wolfgang Hilbig, whose style has more than a few reviewers reaching for the W.G. Sebald comparisons.  However, where Sebald is cerebral and detached, Hilbig is far more down to earth – and, as you’ll see today, he’s certainly not afraid to talk about his own life, often in great detail…

*****
Das Provisorium is a novel set towards the end of the 1980s, running to just over three-hundred pages, which follows a writer from the GDR (East Germany) living in the west.  Having overstayed his visa, he finds himself in a sort of no-man’s land: he’s unable to go home, and he’s not sure he really belongs in the West. Of course, the main problem is that he doesn’t know if he wants to go home either…

This conundrum provides the work with its almost schizophrenic nature, with the action split between the two states.  The writer has a woman on each side of the wall, but he’s constantly on the move, wanting what he hasn’t got, wanting to be anywhere other than where he is.  Trapped in this state of inertia and uncertainty, he’s unable to move on with his life, without the strength to decide which way he should jump.  More importantly, with this existential crisis bubbling beneath the surface, even his writing is suffering.

The novel starts with a bang when the writer finds himself attacked on a flight of stairs, only to realise (after punching his way to freedom) that his assailant is a shop-window dummy.  This scene, typical of his confused state, sets the scene for the struggles he is to face over the course of the novel.  Sitting outside a café in Nuremberg, watching the crowds of shoppers pass by, he speculates on the connection between real life and fiction:

Enough people, there would be a surplus of people even for a big, thick novel.  And it should suffice to enable even the critics to be satisfied, those literary critics who have busied themselves since the golden age of mail carriages with the number of characters in works of fiction.
*** (my translation)

The irony of his comments lies in the way the novel develops.  It’s certainly by no means a thin book, but it’s one that features very few characters, and only one starring role.

Das Provisorium is a work focusing squarely on the writer and his work.  Hilbig describes the struggles of his ‘character’ to write back in the East, showing his efforts to snatch time during work hours and the savage rejections he receives from the snooty state publishers.  Eventually, having been given official permission to become a writer, he is able to publish books and make short trips to the West.  When he manages to obtain a one-year visa to spend time on research and writing in the West, he believes he’ll finally able to write freely:

Here, though, literature had gone to the dogs, that much seemed undeniable.  Works that refused to serve as mere distraction were punished in the market place by simply being ignored… ***

His discovery that in the capitalist world literature has long been repackaged and sold as a consumer commodity comes as a devastating, disillusioning blow.

With his struggles to work, the writer turns to the women in his life in an attempt to provide some focus to his days.  Back in Leipzig, there’s Mona, the woman he lived with for years before his move to the West, one who loves him but despairs of his ever doing the right thing by her.  Meanwhile, over in Nuremberg, there’s Hedda, a fellow writer he has had a lengthy, turbulent relationship with.  It’s in his dealings with the two women that the man’s selfishness comes to the fore.  Everything seems too hard for him, and he is completely incapable of keeping a promise, continually using and disappointing both women.  Hedda, in particular, becomes increasingly frustrated at his reluctance to commit, and his seeming inability to finally break up with Mona:

For you, she had accused him one day, love is just a temporary state! ***

Which is true, but the moment she starts to back away, he needs her more than ever.  There is one more important female character in Das Provisorium, too, the writer’s mother, and while she’s initially kept in the background, in some later sections looking back on his childhood, we learn more about their relationship, gaining some valuable (and disturbing) insights into some of his issues…

His problems with women are relatively trivial, though, when compared to those caused by his drinking.  Very early in the novel, he’s semi-forcibly checked into a rehab clinic, allowing the reader to accompany him through long nights watching the delirium tremens and night terrors of his fellow inmates (and even longer days spent shuffling around the corridors in endless loops).  Much of the rest of the novel is spent showing us how he got there, with the hapless writer on a continuous bender, staggering from pub to pub before briefly returning to his latest squalid flat (full of bottles).  Yet this addiction to alcohol is connected to his other issues, particularly his inability to write, as he believes that getting drunk is the only way to break through his writer’s block.  The sad truth is that he can’t write with it, and he can’t write without it.

Anyone who has tried Hilbig’s work will not be surprised to hear that while Das Provisorium is an enthralling work, it’s not exactly the most accessible novel around.  It’s divided into several long sections, filled with very long sentences, and the overall progression of the story is subverted by lengthy tangents, such as an examination of life in hotel rooms or multi-page musings on pornographic movies.  Apart from describing the writer’s experiences in general, there’s no plot to speak of, and the reader is taken back and forth in time, leading to the occasional sense of dizziness when we find ourselves unsure as to when (or where) we are.  The writer constantly hops from one train to the next, caught in circles between his hotel rooms and the local train station, and the saddest part of it all is that he’s unable to relax and take advantage of the fortunate situation he’s found himself in.  Having dreamed of becoming a full-time writer, now that he has his readings, his money and the time he needs to write, it’s all useless – and so he keeps on moving and drinking…

Several of Hilbig’s books have made it into English courtesy of Two Lines Press (including the one I read earlier this year, Der Schlaf der Gerechten (The Sleep of the Righteous), translated by Isabel Fargo Cole), but as far as I’m aware, there’s no English translation of this one as yet.  The English title, then, is my suggestion, a near translation of the original idea, and with the words ‘Provisorium’ and ‘provisorisch’ (‘temporary’ or ‘provisional’) peppering the text, there’s much in Hilbig’s novel that is temporary.  However, I chose this expression for the double meaning it contains in English; looking back from our twenty-first century vantage point, it’s only natural to see the GDR itself as a temporary state, especially as the end of the novel takes us past the momentous events that ended the eighties.

Perhaps the most important aspect of the novel, though, is how much we can read into it regarding the writer’s own experiences.  It’s tempting to start researching Hilbig’s own life to see how much of this was drawn from his own experiences, and whether he too found himself trapped in a familiar, yet foreign, land, drinking himself into oblivion and disappointing the women who loved him.  However, it’s best to just forget about the creator and immerse yourself in the creation, an honest, warts and all, view of a man unable to come to terms with a freedom that he doesn’t think he deserves, one that will probably come crashing down on him one day.  Das Provisorium is less a novel than a reading experience – whether that appeals or repels will depend, I suspect, on the kind of reader you are…