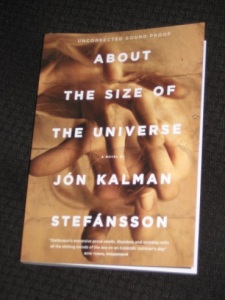 It’s always exciting when a favourite author has a new book appearing in English, and Icelandic writer Jón Kalman Stefánsson’s latest work in translation has just been released, thanks (as always) to the good people over at MacLehose Press.  This one is a follow-up novel to the 2017 Man Booker International Prize longlisted Fish Have No Feet, so please be aware that this review may contain plot information from that book.  All good?  Let’s move on…

*****
About the Size of the Universe (translated by Philip Roughton, review copy courtesy of the publisher) picks up where the first book left off, with Ari in his hotel room in Keflavík, coming to terms with the secrets revealed in the letter he’s just received.  Over the next couple of days, he ventures out into the streets of the small coastal town, bumping into several old friends, including the mysterious unnamed first-person narrator.  All the while, he is plucking up the courage to visit his father, Jakob, hoping to come to some sort of understanding before it’s too late.

Of course, the present-day strand is just one of several making up the story.  The writer also takes us back to the inter-war period, describing the lives of Ari’s grandfather Oddur and grandmother Margrét in the remote fishing settlement of Norðfjörður on Iceland’s east coast, before looking at Ari’s teenage years in the Keflavík of the 1980s.  However, for this second installment of his story, JKS expands his scope further, taking us back to the 1960s.  For the first time, we meet Ari’s mother, who might just be the reason why Ari and Jakob have never seen eye to eye…

About the Size of the Universe is an expansive story spanning several generations, with a wider scope than the writer’s first trilogy of novels in English (Heaven and Hell, The Sorrow of Angels and The Heart of Man).  It’s an epic tale of a family and a nation, taking us from one side of the country to the other as we share in the loves and tragedies of Ari and his relatives (and a host of friends, too).  While it’s certainly a work that demands concentration (the quasi-Tolstoyan cast of unfamiliar names may test the stamina of some readers), it’s well worth the effort, with the various, disparate sections eventually coming together, connected by several ideas.

If one strand could be seen as the main thrust of the novel, it would probably be the attempted reconciliation between Ari and Jakob.  The new timeline tells us more about Ari’s early years and explains the reason for the distance between father and son – the mother’s untimely death and the way Jakob moved on too quickly afterwards.  This information helps the reader to see the later Keflavík years in a new light.  The drunkenness, violence and Ari’s uneasy truce with his step-mother are all direct consequences of the attempt to airbrush his mother out of existence.  However, we gradually learn that the seeds for the tragedy were sown even further back, with Jakob’s course in life set by the actions of  his own mother Margrét when she decides that a stand needs to be taken against Oddur.

While the family is the main focus of About the Size of The Universe, there’s also a lot here about Iceland as a nation.  As Ari walks around Keflavík, he laments the rapid pace and stress of modern life.  By contrast, in Norðfjörður, Oddur’s determined to help with the growth of a nation struggling to stand on its own two feet.  The fish he and his men hunt for each day are to be the driving force of a nascent economy, the source of new roads, settlements and self-respect, and he is quite prepared to sacrifice his energy for the cause (and that of his sons, too).

A noble sentiment, but the question posed throughout the novel is whether the characters are giving up too much in the name of progress.  Quite apart from the bitter irony of Keflavík ending up separated from the sea decades later by an artificial wall of boulders, there’s the human toll of the march to modernity.  The main battlefield for the human soul in this part of the story is the struggle for Jakob’s elder brother, þórður, contrasting Margrét’s determination to protect the sensitive poet and Oddur’s desire for him to become a man of the sea.  Unexpectedly, this is a decision with ramifications eighty years on, as later generations are still working their way through the aftershocks:

The things that have a lasting impact on a person are inherited from one generation to another.  That’s why families often wrestle with the same trolls, generation after generation, until, and if, someone manages to break the vicious cycle.  Then the trolls turn to stone and it becomes easier to live.  And die.
pp.347/8 (MacLehose Press, 2018)

There are many examples of history repeating throughout the story, the same flaws of violence, drunkenness and an inability to say what needs to be said hamstringing members of the family.

Unsurprisingly, it’s usually the women who bear the brunt of these mistakes, and the unfairness of gender roles is another common theme throughout the novel.  Margrét feels stifled in her fixed role as the fisherman’s wife, unable to develop intellectually and having to look on as þórður gradually drifts away from her.  Things haven’t changed much decades later when Jakob loses his temper on finding out about his wife’s writing, and Ari’s Great-Aunt Veiga implores her niece to take a stand:

For too long, many thousands of years, we’ve had to keep our talents under wraps, our passions, desires, have had to take care of the children, do the cooking, do the laundry, while the men have got to do whatever they wanted.  We’re the leftovers, we’re meant to be mothers, housewives, prostitutes, and it’s never been accepted when we tried to step out of those roles.  That’s why we’ve got to be like a resistance movement and follow hidden paths, develop and gain strength before we come up to the surface.  Otherwise they suffocate you at birth.  Not out of malice, simply out of the naiveté of supremacy. (pp.242/3)

It’s not just the mental domination, though, with several examples of physical and sexual abuse, too.  This comes to the fore most strongly in Sigga’s story, when Ari is horrified to find out the truth about what happened on the night he thought he’d been rejected.  We are witness both to her attempt to kill herself and the way she manages to move on, refusing to let the abuse ruin the rest of her life.

Another beautiful work (with the expected wonderful job by Roughton), About the Size of the Universe shows people fighting back against fate with the only weapons available.  One, of course, is poetry, whether it’s þórður’s sudden poem inspired by a bird, the grief-stricken efforts of Ari’s aunt when her daughter is dying, or Ari’s own piece on the beauty of a woman’s breasts (which is actually far more touching than it sounds).   The other is love, an idea underpinning the whole story.  Yes, money is important (and so are fish), but without love, everything falls apart.  It takes Ari two books to come to terms with this, allowing him to make peace with his father and think about what to do next – at which point the narrator suspects that they are no longer required.  It’s a lesson for us all, a reminder that no matter how busy we are, or how vital the task, making time for those close to us is all that will really matter when we look back in later years…