Having travelled the world in search of anatomical wonders, it’s time for a change of pace on our Man Booker International Prize longlist adventures.  Today’s work, by an Argentine writer, takes us to an unspecified village in the French countryside, where we’ll drop in on a young couple with an infant son.  Unfortunately, we’ve come at an awkward time, as there’s tension in the air, and infidelity just around the corner.  Given the circumstances, it might be best all round to just get a hotel room, instead…

*****
Die, My Love by Ariana Harwicz
– Charco Press, translated by Sarah Moses & Carolina Orloff
What’s it all about?
Die, My Love takes place in the middle of the French countryside, but any hopes of a pleasant, bucolic tale vanish before the end of the first sentence:

I lay back in the grass among fallen trees and the sun on my palm felt like a knife I could use to bleed myself dry with one swift cut to the jugular.
p.1 (Charco Press, 2017)

Immediately, the reader is thrust into the world of the narrator, that of a woman unhappy with where life has brought her and who feels trapped by the family she has somehow acquired.  A foreigner in a small community, she already stands out, and her behaviour can only exacerbate this sense of not fitting in.

Part of her problems come from being stuck at home as the mother of a young boy, a role she appears alarmingly unsuited to (and fails at on many occasions).  However, what is tipping her over the edge is the lack of sexual contact with her husband, and when a man who rides past on a motorbike each day catches her eye, it’s only a matter of time before something happens.  We know this is unlikely to end well – it’s just a matter of how…

There’s more than a hint of Madame Bovary in the woman’s actions, but Harwicz’s anonymous protagonist has no illusions about herself.  In her lucid moments, she’s well aware what she’s supposed to be doing, and that she can’t do it, and her real desire is to run away from it all, even if she doesn’t really have anywhere to run to.  She finds life as a housewife in the country stultifying and intellectually empty:

From out here I can see it everywhere and that’s why I don’t go in.  Death is present in the fire, in the carpet, in the curtains, in the stuffiness of the old furniture and the silverware.  In the flowerless vase.  Death seeps out of the umbrellas piled up near the door. (p.17)

Any remaining doubts she has about her future are easily removed by the presence of her mother-in-law, an elderly woman with nothing to live for after the death of her husband.  The young woman realises that the old lady is a picture of her own future.

One way of coping is to turn her energy outwards, often in the form of violence.  Her temper is short, and her tendency to torture insects is just a precursor to greater outbursts of anger, with major consequences for a family pet.  However, with her attention wandering most of the time, she also ends up in the wars herself, acquiring cuts and burns all over.  It’s as if the house simply isn’t a suitable habitat for her (little wonder she wants to spend so much time outside).

Die, My Love is one of the shortest books on the MBIP longlist, yet it’s not really as quick a read as you might expect.  The novel is divided into many short sections, usually two to three pages long, and the slightly unnerving tone is produced by a series of short, simple sentences,with little linking at times.  Along with a complete lack of names (of people or places), this creates a claustrophobic air to the book and unsettles the reader.  In this, there are hints of one of last year’s big contenders, fellow Argentine writer Samanta Schweblin’s Fever Dream, albeit it at a more ponderous pace.

Another short work it reminded me of, though, was a previous IFFP longlisted title, Véronique Olmi’s Beside the Sea.  Like Olmi’s novel, Die, My Love uses a first-person point of view to immerse us in the life of a troubled woman, leaving the reader to guess at (or diagnose…) possible mental illness, or severe post-natal depression.  These short sections, almost like diary entries, are entirely one-sided, meaning we have little opportunity to see the other side of the story; only on a few occasions do we get hints of how the other characters might see her. 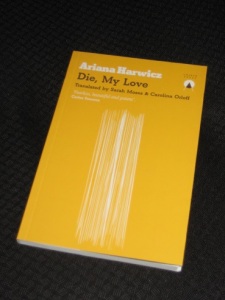 Part kitchen-sink drama, part psychological novel, Die, My Love manages to hold the reader’s interest despite a lack of real action.  As we get closer to the last page, we wonder how the couple will resolve their issues, or whether it’s even possible.  The need to escape occasionally takes priority over the conventional rules of society, and Harwicz shows that sometimes the more you try to fit in, the worse it can all get…

Does it deserve to make the shortlist?
This will probably be close to making my final six.  There’s a lot to like about Harwicz’s short work (and with several longer books on the longlist this year, I was very grateful for its brevity!).  The strongest aspect of the novel is the way the writer builds up the atmosphere, keeping the reader as woolly-headed as the narrator.  Overall, it’s an impressive work and a great introduction (for me) to a new press – which is always a good thing.

Will it make the shortlist?
Quite possibly.  Shades of Fever Dream won’t harm its chances, and it’s another book that will probably improve on a reread.  I spent the first time around speculating on what exactly might happen (and when), so a second try would probably allow me to focus more on the style, meaning it’s unlikely to get boring.  The judges may well agree 🙂

*****
Even if our latest stop wasn’t as peaceful as we might have liked, there’s no time to waste as we have several more visits to make before the journey’s done.  Our next trip will take us to Asia, where we’ll be kicking back and listening to some old stories as we join in the hunt for a rather special bicycle.  Make sure your tyres are pumped up – I’ve heard the road is going to get very bumpy…