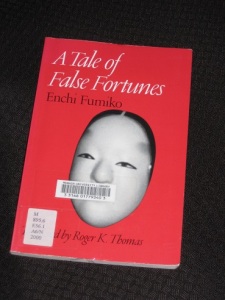 While my last couple of Women in Translation Month posts focused on a Japanese great of the early modern era, this review sees us moving into the twentieth century.  Fumiko Enchi is another big name in modern Japanese literature, both for her novels (such as Masks) and her translations of The Tale of Genji into modern Japanese.  However, today’s choice actually has us heading back in time once more.  You see, despite being first published in 1965, the book is actually set towards the turn of the first millennium, which means we’ll be dropping in on some old friends…

*****
In the prologue to A Tale of False Fortunes, Enchi discusses a lost classic, a book she remembers reading in her father’s study when she was a young girl.  Based on the classic historical work A Tale of Flowering Fortunes, the text she recalls is a variant telling of the same story.  Her task here is, decades after reading it, to reconstruct, as much as possible, this lost text, and in doing so shed fresh light on historical events.

If this all sounds rather dubious, that’s because it is.  Translator Roger K. Thomas is quick to inform us in his introduction that the ‘lost text’ never existed.  Instead, A Tale of False Fortunes sees Enchi, an accomplished classicist, take on the task of examining the original work through a feminist lens and reading between the lines.  A Tale of Flowering Fortunes is ostensibly a historical text, a tale of Emperors and the court in the Heian era, with much of the focus on the all-powerful regent, Fujiwara no Michinaga, and a description of his inevitable rise to power.

However, Enchi riles against this whitewashed version of history.  Her focus is on the way Michinaga manipulates the young Emperor Ichijō to choose his own daughter Shōshi as a consort and get his grandsons crowned as emperors, thus strengthening the power of his direct line.  The original text is history as ‘his story’, and Enchi’s retelling is very much ‘her story’, bringing Ichijō’s first wife, Teishi, into focus.  Unlike the original work, A Tale of False Fortunes shows the machinations behind the throne, while also highlighting the life of a proud woman who loves her husband and does her best to protect him and her whole family.

Enchi’s work is centred on the power struggles of three women. The first is Teishi, the noble beauty chosen to marry the young Emperor.  Slightly older than her child husband, she entrances him from the start, and history has depicted her as a bad influence – but not Enchi:

Many of those who knew Teishi well enough to recognize her exterior beauty and sparkling wit knew nothing of the purity of her heart, which was as limpid as fresh water.    Because of her all too dazzling beauty, the empress was easily misread as having a demonic ability to manipulate the emperor.  In her naive innocence – her inability even to conceive of such scheming – lay the seeds of the adverse circumstances of her later years.
p.44 (University of Hawai’i Press, 2000)

Unfortunately, the second main protagonist isn’t quite as pure of heart.  Kureha is a young woman placed at Teishi’s side by Michinaga (a kind of Trojan horse…), and she proves to be the catalyst for later events, mainly because of her youthful, and very human, flaws.  However, it’s the third of the major female characters, the Emperor’s mother, Senshi, who proves to be Teishi’s greatest foe.  Michinaga is her younger brother, and with family pride on the line, she’s determined to stop her son from making ‘mistakes’.

These intrigues and betrayals make for a wonderful story, and anyone with a grounding in the Japanese classics will be familiar with the main figures and the setting.  Enchi’s novel is a slow-burning story showing how Teishi is slowly isolated at court, and how the plan to turn the Emperor against his wife is painstakingly constructed.  In many ways, what we have is a race against time.  Michinaga’s attempts to undermine Teishi need to succeed before her son is old enough to be named as Ichijō’s heir (this is the Heian era, and succession isn’t quite as simple as you’d think).  Otherwise, all his efforts to keep the throne in the family will have been in vain.

Of course, it’s the feminist slant that lifts A Tale of False Fortunes above your average piece of historical fiction.  Enchi’s decision to focus on the female figures at the expense of the men is the book’s main strength.  We get to see Teishi’s true character in the writer’s portrait of a strong woman able to endure far better than her brothers, whose rash decisions cost the family dearly.  The implication is that Teishi has been slightly slandered in A Tale of Flowering Fortunes, and this is Enchi’s attempt to set the story straight (there are definite echoes here of what Christa Wolf achieved in her novel Kassandra, letting the women of a classic story have their say).

Another feminist aspect is the emphasis on the sexual lives of the female characters.  This is a time where women were supposed to be compliant, heard but seen only behind screens (or under cover of darkness), but Enchi is keen to bring their sexual behaviour into the open, with one example being her unveiling of the true lives of shrine maidens:

Viewed from one angle, a shrine maiden’s state while possessed by a god also follows a course through extreme tension between body and mind, passing through ecstasy and finally to saturation.  Through this course, the sex drives are naturally satisfied.  In other words, a shrine maiden in a divine trance is performing a sort of sexual act. (p.25)

This sexual life is far from being confined to their possession either, as Enchi later explains.  In addition, unlike true Japanese classics, A Tale of False Fortunes allows the reader slightly longer stays in the bedroom.  We see the imperial couple’s love laid bare (and hear their moans of passion), and there are even rather clear hints of Kureha’s longing for the Empress herself…

Part of the charm of the book is the links to other Japanese classics.  Quite apart from the obvious connection to A Tale of Flowering Fortunes, there’s a rather big nod in the direction of The Pillow Book.  That work actually chronicled events of this period, and Sei Shōnagon herself pops up as a minor character here.  However, for me, it was the connection to another book that surprised most.  The main story here begins in 990, as the Regent lies dying, with none of the priests’ efforts helping.  Instead, the old man is lambasted by one of the mediums in attendance for the constant philandering throughout his life.  The regent’s name?  Fujiwara no Kaneie – now where have we heard that name before?  It’s hard to imagine that this isn’t a deliberate dig on Enchi’s part at the faithless Kaneie…

A Tale of False Fortunes is a clever, measured tale and an intriguing look at court power games, a rewriting of history that shines a light on neglected characters.  Yes, it’s fiction, as much as Enchi’s style (interrupting herself, questioning the text) might suggest otherwise, but then the original text, written by a supporter of Michinaga, might be every bit as invented:

That my inference is not merely arbitrary is born out by the fact that the content of A Tale of False Fortunes is quite different in tone from the eulogistic hymn to the regent’s family.  False Fortunes attempts instead to portray by contrast the victor’s tyranny hidden behind his prosperity and the sudden misfortunes and ruin of those who attempted to resist that tyranny. (p.13)

It’s common knowledge that history is written by the winners.  Here we have the underdog’s voice, and a great one it is.  Women in Translation Month has a fair way to go, but when it comes to great writing and allowing women to speak up, I suspect I may have already found this year’s favourite.  This is a book that definitely shouldn’t be confined to August 🙂