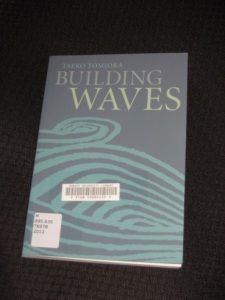 We’re moving on a few years now to 1983, and today’s choice is, like my previous selection The Word Book, one from the series Dalkey Archive Press put out some years back.  However, the two books are rather different.  Where Mieko Kanai’s collection of short stories was a drifting, mesmerising exercise in the opaque, this one is a lot more down-to-earth, looking at changes in human relationships and the surrounding landscape – with both capable of changing and being destroyed.

*****
Taeko Tomioka’s Building Waves (translated by Louise Heal Kawai) is narrated by a forty-something woman who drifts into a casual relationship with a man she meets at a talk on local archaeological history.  They make for a rather unusual couple, with the garrulous translator and poet unable to get much out of her slightly slow, lumbering lover.  However, that doesn’t matter as she’s only in it for one thing, and she decides she can do without talk.

The second half of the novel then takes a different tack as other characters start to appear.  There’s Kumiko, a friend who looks up to Kyoko (as we eventually learn the narrator is called); Yoko, Takuo and Tokiko, a family living in a ramshackle house on a hill (with lots of cats…); Amiko, a new friend, a woman living in a perfect house with her perfect family; and then there’s Ayako, who wants nothing more than to be a traditional housewife.  Oh, yes, and she happens to be the wife of Kyoko’s lover…

Building Waves is an unusual book in some ways, very much a story of two halves.  The first explores the relationship between two very different people while the second widens the scope considerably, almost surprisingly.  The title comes from the Japanese building boom of the 1980s, with hills being adapted, or even levelled, to make way for housing estates, and the waves of the title are actually those of houses sweeping out to the horizon.  It’s progress of a sort, but as the characters gaze out over the hills, there’s a pessimistic feeling that the view won’t stay like this for long.

The early chapters dealing with Kyoko’s relationship with Katsumi are appealing and fun to read.  Tomioka cleverly examines the way an independent woman can make life awkward for a traditional man:

But in reality he was obsessed with the fact that he had never gone out with an older woman before.  I have no idea where it came from, but all his specifications for the right, the appropriate woman to go out with, these kinds of things seemed to be so ingrained with him that any woman who didn’t fit these specifications made him uncomfortable.  I learned that being younger than him was the most important stipulation, and being about eight inches shorter was requirement number two.  He kept repeating,”You look so young!” which I soon realized was his way of tailoring me to the correct specifications, and necessary to his peace of mind.
p.31 (Dalkey Archive Press, 2012)

If this is his way of getting around their incompatibility, hers is to take what she can on a physical level.  While she does try to make conversation and learn more about him (she’s a woman who finds it hard not to talk), in the end she gives up trying to squeeze blood from a stone, instead taking her revenge by dragging him around to various tacky love hotels.

Throughout the novel, the writer explores her country’s (slowly) changing gender roles.  Katsumi is definitely stuck in the past (as it turns out, so is his wife), but Kyoko, with her direct nature, is not your traditional J-Lit woman:

My sexual desire is something plain and direct and has a short fuse.  Men are used to women needing a wide range of foreplay for sexual satisfaction.  Or perhaps it’s just their fantasy that women need their sex dressed up – they believe that women must be craving all the added extras.(p.44)

When her lover starts to annoy her, she taunts him, being deliberately crude, hoping to irritate his old-fashioned masculinity.  The truth is that he’s too indolent to even bite.

The second half of the story expands on that view of Japanese society by looking at a handful of families.  Initially, Katsumi and Ayako seem like dinosaurs compared to some of the other characters, whose lives appear more flexible.  However, things are often different when we look beneath the surface.  As we get to know everyone better, it becomes clear that they all have their own marital issues, and some of these can have serious consequences.  And then there’s Kyoko herself – she’s married, too, but this is the one thing she doesn’t want to talk about…

Building Waves is an interesting book that is very heavy on dialogue in the first part, especially, and Tomioka and Heal Kawai handle this nicely (which is ironic as much of this section has Kyoko complaining about a lack of conversation!).  The writer gradually unveils the second layer beneath the personal troubles when she introduces Kyoko’s obsession with the land and the building going on.  This juxtaposition of petty human squabbles and archaeological time puts everything into perspective.  Perhaps part of Kyoko’s calm nature reflects the fact that it’s hard to get worked up about relationships when you look out over the hills and think of the people living there tens of thousands of years ago.

In truth, though, Tomioka’s novel didn’t quite do it for me.  While I enjoyed the first part, a tight, controlled look at an unusual relationship, the second half drifted a little and never quite seemed to come together.  It’s almost as if there are a number of stories in there that have been pushed together rather than properly intertwined.  It’s certainly not a bad book, and there’s a lot to enjoy among these disparate ideas.  Perhaps other readers will see a more coherent novel than I did.

Still, Building Waves does provide an interesting look at the society and gender politics of the era, and that’s nothing to be sniffed at.  It also makes for a nice reminder (along with The Word Book) of the Dalkey series.  There are around a dozen in total, of which I’ve now read three (the other being Takehiko Fukunaga’s excellent Flowers of Grass).  There aren’t many of the usual names among the contributors, but it’s a collection that’s definitely worth checking out 🙂