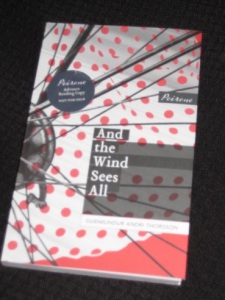 I have a bit of a soft spot for literature from Iceland (as you may have noticed), so when I heard that one of Peirene Press’ 2018 releases was a novel from that country, I was even more eager than usual to check it out.  It’s an excellent work, and another example of the high standard of translations from Icelandic to English, yet there is one thing about the book I’m a little unsure of.  You see, calling it a novel might be stretching the truth a little.  This is a book of stories, even if there is a connection between them…

*****
Guðmundur Andri Thorsson’s And the Wind Sees All (translated by Andrew Cauthery and Björg Árnadóttir, review copy courtesy of the publisher) is set in the north of Iceland, in the village of Valeyri.  It’s a book of many parts linked by one action, a woman in a white dress with blue polka dots riding past on a bicycle.  This Kata Choir, as she is known, is a foreigner who runs the local choir, which is to perform this evening after months of practice.

However, unfortunately, we’re destined never to get there.  Instead, the book is like a loop, replaying the same couple of minutes of time through the eyes of a number of the village’s inhabitants.  As Kata cycles past, each readies themself for the evening ahead while reflecting on the past, and their stories are well worth the hearing.  Valeyri may be a small place, but the people there have just as many secrets as those in the big cities, if not more.

As mentioned, And the Wind Sees All isn’t really a novel, more a collection of thematically linked stories.  Thorsson brings us into the village with the wind and helps us to drift from house to house as we hear the locals’ confessions and observe their indiscretions.  The impending recital provides a frame of sorts, but in truth it’s what happens inside the stories that connects them, as there are several common themes in the many short pieces.

From the first pages, one of the main ideas discussed is sadness and loss, and many of the characters we meet have lost loved ones.  There’s Sveinsína, happily married, but remembering her first husband, who died far too young; Árni, wealthy, but full of regrets over the departure of the woman he loved, and the time he never made for her; then there’s Gunnar, whose reencounter with a childhood sweetheart hurts more than he lets on:

“Remind me, how long were we together?”
Maybe this sounds, Gunnar thinks, as if I’m just chatting about something that doesn’t really matter that much.
Maybe it sounded as if everything was all right.
Maybe it sounded as if he hadn’t fallen from a height of 6,000 feet without a parachute and crashed brutally onto the rocks below when she dumped him.
p.134 (Peirene Press, 2018)

Yes, love hurts.  This one is a story that might have a happy ending, though.

Another topic that crops up repeatedly is abuse.  Kata’s story is sketchy to say the least, and it’s only when it’s eventually finished by another character that we learn the horrible truth behind her arrival in Iceland, a story that seems out of place in the peaceful village.  Meanwhile, Old Svenni’s day at home nursing a cold is spent revisiting memories of a summer spent on the land as a teenager.  Again, what starts as a bucolic drama is to end with a surprising, sickening twist.

Of course, the village itself is another frequent topic, with several of the characters musing on what exactly it is that makes life there worth living:

A village is not just the movement of the surf and a life of work, the clattering of a motorboat, or dogs that lie in the sunshine with their heads on their paws.  It’s not only the smell of the sea, oil, guano, life and death, the fish and the funny house names.  It’s also a chronicle that moves softly through the streets, preserving an elemental image of the village created piece by piece over the centuries.  This is us, what we are like, the people of Valeyri, we here, we. (p.84)

The upside of village life is the closeness: Kata waving to everyone she sees, Lalli the deluded ‘patriarch’ doing his rounds and greeting all and sundry.  Life there is comfortable, if a tad smothering, and there are many contrasts with life in the ‘big city’ of Reykjavik, and the urban mentality that is behind the country’s recent financial woes.

As always seems to be the case with Icelandic literature, And the Wind Sees All is a pleasure to read, with Cauthery and Árnadóttir joining translators like Victoria Cribb and Philip Roughton in bringing an Icelandic book to life in English (either the relationship between the languages makes translation easier, or there are some excellent translators out there, because I’d really struggle to name one Icelandic book I’ve read where the English was poor).  Thorsson’s stories are calm and elegant, with some wry humour and the odd spot of deliberate coarseness, but every so often, time seems to simply stop.  One scene, an impromptu garden party where people sip dandelion wine in the sunshine, is a beautiful example of a moment frozen in time.  However, here, as is often the case, the mellow start to the story gradually melts away, with darkness just around the corner.

One piece, ‘Aroma of Ashes’, can serve as an example of the general format.  It features two couples, old friends, having a friendly drink in the afternoon and smiling at the idiosyncrasies of one of the husbands.  Yet within a few pages, all this is shown to be superficial, deceptive, with one couple’s relationship actually rather strained.  Again, we are shown the consequences of the financial turmoil that engulfed the country, with one man, a local banker, caught up in global issues.  His worried wife fumes:

Do the scandal papers down south ever mention how he has sat here and calmed people, advised them, pointed them back in the right direction, lent them money and made sure that they didn’t rashly embark on careless investments that could actually wait? (p.109)

These are the faces behind the crash, and by inviting us to read their thoughts, Thorsson shows us their suffering.  The last page then brings one last twist – even the idea of the familiar gesture of the host proves to be something other than we had been told.

Having met the choir, it would have been nice to get to the concert, but that was never Thorsson’s intention.  Instead, he uses his village to introduce the reader to the Icelanders of today, and the problems they face.  And the Wind Sees All makes for a brief but enjoyable stay, and a promising introduction to a new Icelandic name; overall, I think our afternoon in Valeyri was well spent.  Still, given some of the dark secrets we learned, I think a few hours in the village is more than enough…