One of the highlights of the reading year (at least around these parts) is the announcement of the Man Booker International Prize longlist, and 2019 is no exception.  This year’s selection will be made public on the 13th of March, when twelve or thirteen books will be presented for the wider reading community to marvel at (or criticise…) – and, of course, for our Shadow Panel to dissect.

However, that’s a story for another day.  Today’s post sees me taking my usual stab at predicting what might get the seal of approval from the five brave souls who have actually read all the submitted entries.  By contrast, my guesses are based mainly on the few that I’ve read and those that others have shouted about in the blogosphere (links, where available, are to my reviews).  Don’t take this too seriously, but here are a few books that might (not) make the cut next month…

In betting circles, there’s nothing like ‘form’, and several contenders have it in spades.  Mathias Énard and Charlotte Mandell have been constant presences on our Shadow lists, with a couple of appearances on the real ones, too, so you’d expect the French writer’s short historical novel Tell Them of Battles, Kings and Elephants (Fitzcarraldo Editions) to be in with a shout.  However, the familiar faces don’t stop there.  Roy Jacobsen’s The Unseen was very popular with the Shadow Panel a couple of years back, and with the two Dons, Bartlett and Shaw, on translation duties for the sequel White Shadow (MacLehose Press), it’s hard to imagine this one not being considered.

Moving on, there’s the new book from Samanta Schweblin, Mouthful of Birds (translated by Megan McDowell: Oneworld Publications) and the second part of Virginie Despentes’ Vernon Subutex trilogy (tr. Frank Wynne: MacLehose Press).  We even have a new novel from the defending champion, with Olga Tokarczuk’s eco-thriller Drive Your Plow Over the Bones of the Dead (tr. Antonia Lloyd-Jones: Fitzcarraldo Editions) looking to bring home the prize once more.  I’d be very surprised if we didn’t see a few of these on the longlist.

As well as form, there’s the allure of a big name (something that’s hard for judges to resist), and several prominent writers have books eligible this time around, even if not all of them have met with universal acclaim.  The End of Karl Ove Knausgaard’s My Struggle series (tr. Don Bartlett & Martin Aitken: Harvill Secker) was met with more relief than joy, and Haruki Murakami’s latest doorstopper, Killing Commendatore (tr. Philip Gabriel & Ted Goossen: Harvill Secker), wasn’t all it might have been.  On the other hand, two shorter works by Dag Solstad, T Singer (tr. Tiina Nunnally: Harvill Secker) and Armand V (tr. Steven T. Murray: Harvill Secker), have been received far more positively, so I suspect they’ve got more of a chance of being included.

Two other books I haven’t got to yet, both by favourite writers, might also make the cut.  Javier Marías’ newest novel Berta Isla (tr. Margaret Jull Costa: Hamish Hamilton) looks to have echoes of his wonderful Your Face Tomorrow trilogy, while Icelandic writer Sjón, the inaugural winner of our Shadow Prize for From the Mouth of the Whale, may be back this year, along with translator Victoria Cribb, with his trilogy of shorter works, CoDex 1962 (Sceptre).  I’d love to see both make it, even if that will up the page count a tad…

While these longlists are usually dominated by European writers, I’m hoping for a few of my favourite Japanese and Korean writers to make the final selection, especially with Murakami not really likely to do so.  I’d actually be surprised if Sayaka Murata’s Convenience Store Woman (tr. Ginny Tapley Takemori: Portobello Books) wasn’t selected, given its popularity, and with Yoko Tawada’s The Last Children of Tokyo (tr. Margaret Mitsutani: Portobello Books) having won the National Book Award for Translated Literature over in the US, it must be in with a shout here, too.  However, one I actually preferred to both of these is a book I reviewed recently, Yū Miri’s Tokyo Ueno Station (tr. Morgan Giles: Tilted Axis Press), and even though the release has been pushed back to the end of April, I think that still makes it eligible for this year’s prize.

Unfortunately, I’m slightly less confident about seeing a Korean book on the longlist.  Another Tilted Axis release, Hwang Jungeun’s I’ll Go On (tr. Emily Yae Won), is certainly a possibility, but I’m not really sure it’s as good as her previous work in English, One Hundred Shadows, which wouldn’t have looked out of place on a longlist.  I’ve also been talking up Hwang Sok-yong’s chances for years now, but if Familiar Things didn’t make the cut, I can’t see At Dusk (tr. Sora Kim-Russell: Scribe Publications UK), as good as it is, being chosen.  Ironically, the Korean book with the best chance of making the longlist is probably Kim Un-su’s The Plotters (tr. Sora Kim-Russell: Fourth Estate) – a book that, if I’m being honest, doesn’t really appeal… 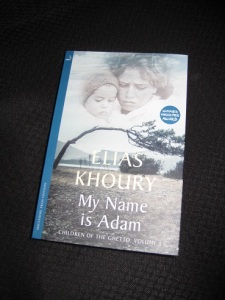 Of course, the MBIP longlist is always a good chance for smaller presses to shine, and there are several books I’ve read that would grace the selection.  Yet another MacLehose possibility is Elias Khoury’s My Name is Adam (tr. Humphrey Davies), the first book in a new series on Palestine.  By contrast, Peireine Press haven’t been as fortunate in recent years, but both Guðmundur Andri Thorsson’s And the Wind Sees All (tr. Björg Árnadóttir & Andrew Cauthery) and Virve Sammalkorpi’s Children of the Cave (tr. Emily Jeremiah & Fleur Jeremiah) might be outside bets.

Another press that has largely been ignored in recent years is Europa Editions, but I suspect that Négar Djavadi’s excellent Disoriental (tr. Tina Kover) might change that.  There may even be a glimmer of hope for another Japanese book, Kei Iwaki’s Australia-set Farewell, My Orange (tr. Meredith McKinney).  Finally, you might be hearing more about a couple of books that I haven’t tried, but that others have been very happy with.  Cristina Rivera Garza’s The Iliac Crest (tr. Sarah Booker) would be a first longlisting in a while for And Other Stories, while Julián Fuks’ Resistance (tr. Daniel Hahn) would see Charco Press highlighted for a second consecutive year.  I wonder how likely that is…

*****
As always, please take these ‘recommendations’ with a pinch of salt.  I’ve done my best to check, but there’s never any guarantee that these are all eligible (and definitely no promises as to whether they were actually submitted by their publishers…).  Perhaps more importantly, though, it’s a good idea to cast our minds back twelve months.  You see, in last year’s equivalent post, I mentioned ten titles – of which only four were actually chosen.  Don’t go betting the house on my guesses, please 😉