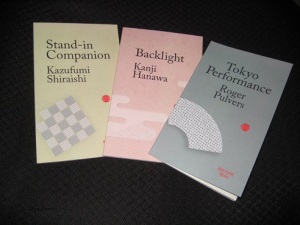 A few days back I posted on the first of three short books from Red Circle, beautiful individual slices of Japanese literature, and in today’s post it’s time to look at the other two I was sent to review.  First, we’ll be taking a trip to Hokkaido to hike through the mountains, before heading off to Tokyo for a visit to a TV studio.  These are very different stories, but connected by a touch of humour, even if one is slightly more subtle than the other…

*****
Kanji Hanawa’s Backlight (translated by Richard Nathan) is based on a real-life story from 2016, when a seven-year-old vanished in the woods for six days after his parents left him by the side of the road as a punishment.  In Hanawa’s fictionalised account, though, the focus is not on the boy, or his family, but on Ishida, a psychology lecturer dragged into the hunt in order to use his expertise to predict where the boy might have gone.  While Ishida is initially reluctant to get involved, he eventually heads off to the scene of the disappearance and prepares to assist where he can.

However, Backlight doesn’t run quite as you’d imagine.  Far from helping with the investigation, Ishida (along with other assembled ‘experts’) proves to be of little use and spends most of his time hanging around the contact point before catching up for a nightly (alcohol-fuelled) debrief with other psychologists at a local hot spring resort.  In fact, these evening discussions make up the bulk of the story, leading the reader to suspect that the boy isn’t the focus of the piece at all. 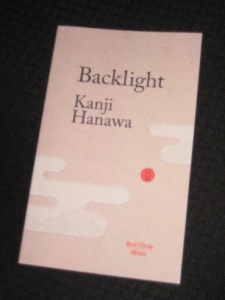 I was initially a little suspicious of this story, with the psychologists’ rambling theories about children and society coming dangerously close to stereotype and xenophobia (with plenty of the usual lashings of Japanese exceptionalism).  Yet on closer examination, there’s a sense that Hanawa is subtly mocking his characters, and the way society handles events such as the boy’s disappearance.  As the ‘experts’ enjoy the hot baths and fancy dinners, their theories on the nature of abandonment and the different ways western and Japanese children cope with the concept of freedom only serve to show how little they really know.

Japan isn’t alone in bowing to public opinion by turning to experts who aren’t much help in order to appease an expectant audience, but Backlight cleverly shows how these ‘helpers’ can be more of a hindrance:

Local mountaineer: “A little upstream, there’s a crossroads where the river and road meet.  But I’m confused as to why a seven-year-old boy, walking in light rain, would place so much importance on looking for water.”
Chairperson: “A new professor of psychology has joined us.  On this one point could you give us some insight into how a child might think and act?”
Ishida: “I can’t say anything conclusive, but it would be linked to how a seven-year-old boy might feel about being left behind, and the boy’s personality.”
pp.10/11 (Red Circle, 2018)

Of course, it’s the hundreds of volunteers that help find the boy, not the experts, and he’s located a good distance from where the psychologists thought he might be.  Still, at least lip service was paid to the television news audience who demanded action (of course, I may have misread this completely, and Hanawa might have wanted to portray Ishida as a necessary part of the search, in which case it’s a very different story indeed!).

*****
By contrast, Roger Pulvers’ Tokyo Performance leaves very little room for interpretation.  In this one, the shortest of the three books, we witness a man in the middle of a personal and professional meltdown, even if he’s proud enough to ensure that the show must go on.  Narrated by the producer of a TV cooking programme, the story introduces us to Norimasa Inomata, the star of the 1970s weekly show and the darling of middle-aged housewives across the nation for his lively, innuendo-laden banter.

The story, bookended by the producer’s introduction and comments, sees Inomata running through his programme, chatting to the audience as usual.  However, this time, there’s a difference, as he starts to go off on more personal tangents:

“Uh, so, my wife doesn’t live in Akasaka anymore.  But we remain in touch.  And I’ve got beautiful almonds here, ’cause they’re rich in vitamin E, you know, which helps prevent prostate cancer and… what?  Oh, my producer is crossing her arms in front of her chest, giving me the big “X” sign.  Look, we can talk about anything on Japanese television today, can’t we?  Thank you.  See, Producer, they’re applauding.”
pp.8/9 (Red Circle, 2018)

So far, so good, but there’s only one way from here, and that’s down.  Soon, Inomata’s commentary becomes more accusing, and the short breaks for commercials only serve to act as interludes to gather energy for more complaints.  And then comes a call from the public, which he’s happy to take – he’s a pro after all… 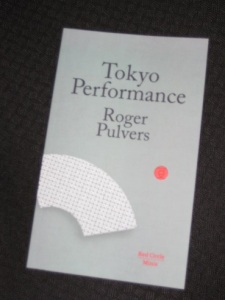 Pulvers is a fascinating person with a long writing history in both English and Japanese in a variety of genres and media (I think this story was originally written in English, but who knows – he may have translated it himself…), and you sense that the story may be based on a real-life TV personality.  There are distinctive Japanese touches, such as the strained relationship with his family, but it’s a story with universal appeal, that of a man neglecting his family in search of fame, and eventually losing both.

Of course, it’s all about the performance, and most readers will enjoy the show, a train wreck, an accident waiting to happen.  In fact, Tokyo Performance reminded me of the 2017 Man Booker International Prize winner, A Horse Walks into a Bar.  David Grossman’s novel has a stand-up comedian self-destruct in front of his audience, and the same happens here, if in a shorter time-frame, with Inomata determined to go down in flames (or flamola, à la Iron Chef).  If the initial comments about his wife are fairly innocuous, by the end of the show the audience is stunned into silence, realising that they’re watching their hero self-combust while his scallops simmer in a buttery sauce…

*****
So, that’s the trio of minis reviewed, but please check out the Red Circle site for more information on the writers and their work.  There’s no news on the next set of stories yet, but their writers are already known – so head on over and see what’s in the pipeline 🙂