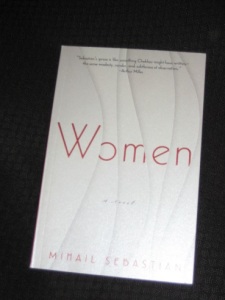 One of the nicest unexpected reading surprises I’ve had over the past few years was Romanian writer Mihail Sebastian’s excellent novel For Two Thousand Years, a story that showed autobiographical tendencies while also depicting the disturbing rise of violence and right-wing ideology in his country.  It goes without saying, then, that I was very happy to find another of Sebastian’s books in my letter box a while back, and while the content is very different, this latest book is just as enjoyable.  It has a slightly narrower scope, focusing on a man and one particular area of his life, namely the women he encounters.  However, his is only one story, and today we’ll be examining at least four others, each equally compelling and amusing, if occasionally tinged with regret.

*****
Women (translated by Philip Ó Ceallaigh, review copy courtesy of Other Press), despite its front-cover billing as ‘A Novel’, is a collection of four stories featuring the same character, a Romanian doctor called Stefan Valeriu.  Each piece examines a different stage of his life, with a particular focus on the women he meets along the way, whether these are fleeting encounters or more serious long-term relationships.  However, Stefan isn’t always the main attraction in these stories, and at times he is merely the narrator, telling the reader about a love affair occurring in his vicinity, or even simply listening to what someone else has to say about matters of love.

The first part, ‘Renée, Marthe, Odette’, has the twenty-four-year-old Stefan recovering in a Swiss guesthouse from the exertions of his medical school exams in Paris, and as the title suggests, part of his recovery involves three attractive women he meets there.  He first flirts with Marthe, an older woman who enjoys the young man’s advances without allowing him to get too close, before turning his attentions to Renée, a married Tunisian woman bored of her life in the desert.  Once this affair begins to become a little too intense, he moves on to Odette, an eighteen-year-old woman who joins the party towards the end of the season.  The house by the lake is a place outside daily life, and the idle days and cool nights seem made for romance.

The tone is rather different, though, in the final part, ‘Arabela’.  Set years later, this story has an older, more worldly Valeriu visiting a Parisian circus on a whim and having a drink with a beautiful performer.  In a flash, the two connect, deciding to move in together, and our Romanian friend suddenly discovers the mundane happiness of a long-term relationship:

When we crossed the place Vaugirard on our way home, usually arm in arm, either because we were in love or from the cold, our acquaintances would smile at us from their respective stores and more than once I heard the whisper behind us, Voilà la jeune ménage du sixième qui passe.  I didn’t dislike this description of us, and the respectability it conferred to our arrangement made Arabela truly happy.
p.155 (Other Press, 2019)

Alas, this endearing love is unlikely to last, and where his early adventures took place in permanent sunshine, the dark, rainy Parisian nights hint at an eventual bitter-sweet ending.

These longer sections featuring Stefan as the protagonist are separated by two shorter pieces in which he is more of a bystander.  ‘Émilie’ has him telling us the tale of a plain, simple woman who meets her match in a Romanian visitor, one who seems rather out of place in Paris, while ‘Maria’ takes the form of a letter to Valeriu from the woman in question, in which she abruptly rejects his clumsy advances.  In order to do so, she reveals a secret, telling him that she is, in truth, already attached, and has been for many years, to his best friend…

*****
The above descriptions will hopefully give you some idea as to what the book is about, but Women is far more than a small collection of tales of love.  As was the case in For Two Thousand Years, Sebastian’s work is a joy to read, and the weightless, joyful tone of the first piece manages to spread to the reader – this is the sort of book you would read on a lazy summer afternoon, enjoying a moment out from the strains of everyday life.  Ó Ceallaigh’s work is again superb, and we’re lucky to have been given Sebastian’s work in his translation as it’s the feel that makes the book, every bit as much as what the words convey.  The variety of points of view (Stefan appears in the first-, second- and third-person) and narrative style (descriptions, letters and monologues) adds to the book’s appeal, and the underlying humour, at times subtle, occasionally more ribald, is a further bonus.

Of course, the main theme of the book is relationships, and while Stefan is occasionally in the background, we see the progression in his views as he matures (or simply gets older).  The events in Switzerland are a little juvenile and thoughtless, with everything accompanied by a knowing, ironic smile:

Shortly after the doctor had left, while Odette was listening to Monsieur Rey’s explanations in the garden, a servant sought Stefan Valeriu.
– Madame Rey insists you come upstairs.
He found her naked, stretched diagonally across the double bed, very pale but with her eyes shining feverishly.  The light of dusk, reduced further by the heavy drapes, fully drawn, increased her pallor and cast heavy shadows across the pillows.
– Are you sick?
– No, I’m in love with you.
– My dear Renée, that’s very nice, but is this really the time to tell me?  When your husband, alarmed, might come up here at any moment?  When the entire guesthouse has its eyes glued to the patient’s windows? (pp.47/8)

These early dalliances leave few marks on Stefan’s heart (and conscience), and even if the women might think differently, he can chalk his holiday up as a success.

However, as the book progresses, he comes to learn that life isn’t all fun and games.  The tragic end of Émilie’s relationship is a telling reminder of human mortality, and Maria’s revelations show him that love isn’t all about having fun together, instead showing the need for self-sacrifice and years of unhappiness.  These lessons prepare him for when he finally embarks on a true relationship, and the Stefan of the final part of the book is a very different creature to the carefree youth of the start.  That’s just as well, as the young medical graduate may well have struggled with the way his relationship with Arabella ends.

With each woman, the writer takes a different approach, reflecting how human relationships are similar yet subtly unique, and his creation seems to be proud of what he’s looking back at.  This feeling is perhaps best reflected by a passage from near the end of Maria’s lengthy letter:

It’s a stupid thing to say to you and probably inappropriate, but you’ll forgive me this moment of sentiment: they were the most wonderful days I can remember.  I have a whole stack of photographs from that time and I often look at them – even today – without regret, without complaint for everything that’s happened since, happy to discover some new detail in one of those pictures I know by heart and in which everything, absolutely everything is affecting… (p.105)

It’s a view that will probably strike a chord with most readers, too.  We all have our own histories, and Sebastian’s summary of a life of relationships is bound to evoke our own experiences of times, and loves, lost…