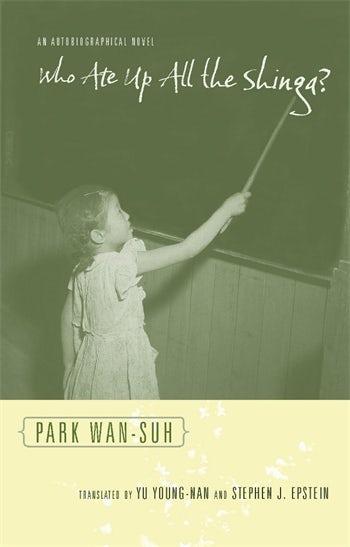 Park Wan-suh was one of the most popular and successful twentieth-century Korean writers, but while I’ve tried her short-story collection Lonesome You, as well as a few scattered pieces in anthologies, I’ve never really warmed to her work.  However, having long wanted to try one of her novels to see another side of her writing, I was happy to find one of her best-known books on a recent trip to the university library.  This one is a rather personal story of the writer’s formative years, made more compelling by the events going on in the background.  Growing up is never easy, but some periods of history make it more difficult than others…

*****
Who Ate Up All the Shinga? (translated by Yu Young-nan and Stephen J. Epstein) is an autobiographical novel taking the reader through the first couple of decades of the author’s life.  It starts in the countryside, with little Wan-suh the apple of her grandfather’s eye, a slightly spoiled toddler having fun in a spacious traditional house.  However, her mother has big plans for her children, and after setting up a home in Seoul with Wan-suh’s older brother, she comes back to the country and tells her daughter that it’s time to move on – she’s about to become a city girl.

Moving to the capital is bound to be tough for a child used to roaming the fields, and life in Seoul certainly takes adjusting to.  However, the real difficulties come from what’s happening in the background.  You see, the story of Park’s youth takes place between her first childhood memories in the early 1930s and the start of 1951, a time of great upheaval in Korea.  In addition to the usual issues of school and puberty, Wan-suh has to cope with Japanese occupation, liberation and the small matter of a bloody civil war.  Now that’s quite a childhood…

Who Ate Up All the Shinga? is a single, lengthy monologue broken up into chapters, told by an elderly woman looking back at her childhood.  The novel is characterised by its frank, chatty style, as if the writer is telling her grandchildren about her early years.  The book was originally published in 1992, appearing in a very different modern Korea, and it’s no surprise that it sold by the bucketload, evoking as it does strong memories for the older generations, and putting a personal slant on ancient history for younger Koreans.

In the first chapters, the charm of a pastoral upbringing give way to the culture shock of the move to the city, with the young girl leaving her little world for the first time.  Near the end of the first leg of her journey, she reaches the top of the hill and is stunned by what she sees below:

And then a sight I’d never witnessed before spread beneath me: the Songdo I’d heard so much about.  I let out a cry, awestruck at this beautiful city gleaming silver.  Its roads and houses dazzled me.  I later learned that all its large new buildings were built in granite.  The sandy soil gave the city its characteristic rocks and roads of white.  So people live in places like this!  I gasped as I stared, enchanted by the artificial order and neatness.
p.31 (Columbia University Press, 2009)

The sight of sunlight reflecting off glass windows (which don’t exist in her village), the tall buildings and the frenzied hustle of the passengers at the train station – it’s all a bit much for our country girl.  And this isn’t even Seoul, just the local market town.

However, this awe soon gives way to disillusionment.  Like many newcomers to the capital, Wan-suh finds herself living in a cramped set of rooms with no running water, exiled to the hills outside the city proper.  One of her first impressions concerns the lack of ‘real’ greenery in her new home, and the book’s title comes from her surprise at the bare state of the hills.  She laments the lack of plants commonly found in the fields and on the hills of her home village, which provide a tasty snack between meals for hungry children.  Unfortunately, that’s not an option here in Seoul.

Over the course of the novel, Park provides the reader with an overview of her family, and in addition to the main trio of the mother, brother and narrator, Wan-suh’s uncles and aunts also make frequent guest appearances.  Her brother is hard-working and studious, yet despite getting a good job, it never really seems like he’s getting ahead.  He’s compared unfavourably with the uncles, wheeler-dealers who can sense the political wind changing and do their best to turn it to their advantage (although this is a very dangerous game in mid-twentieth-century Korea).

For many non-Korean readers, the main interest will be in the political background of the novel.  The Japanese largely remain outside the frame of the story, except for the school scenes and the dilemma of whether or not the family should adopt a Japanese name (which Wan-suh’s grand-father, and later her brother, are strongly against).  As she grows up, though, the narrator pays more attention to societal events, such as the growing political schism in the country after liberation, a split that eventually leads to outright war.  Her family finds itself caught in the middle of the country, with leftist tendencies and a history of low-level Japanese collaboration – it doesn’t look good.

One of the features of Who Ate Up All the Shinga? is its ‘warts and all’ nature.  Park happily talks about how the children all pooed together in a spacious outhouse in the country and makes no secret of her youtful tendency towards petty theft.  She’s also frank and unapologetic regarding her family history and Japanese connections.  Her uncle had a comfortable administration job and her brother worked in a factory which was adapted to produce munition for the army, and this brings inevitable consequences once the war is over:

Only after a group of youths barged into our house, brandishing sticks, did we learn that Japan had fallen.  Strutting and chortling, the young men set about smashing our door frames and furniture.  Most of them were strangers to me, but one or two were fellow villagers. (p.159)

Wan-suh herself was educated in Japanese and preferred it to Korean, only deigning to read Korean fiction when she got to university (this isn’t an angle I’ve seen explored much in other Korean books).

While I wouldn’t say that the novel has changed my opinion of Park’s work massively (I’m still not a fan of her slightly self-indulgent, grating voice), it’s definitely worth a read for anyone interested in Korean literature.  The team of Epstein and Yu have done a great job of bringing the author’s story over into English, capturing the storytelling tone that makes the book such an enjoyable and comfortable read.  In his introduction, Epstein stresses that it was a huge best-seller in South Korea, and after finishing the book, I can’t say that comes as a surprise.  As is the case in most countries, there’s obviously a demand in Korea for revisiting the past and providing a new angle on times gone by.

Overall, Who Ate Up All the Shinga? makes for a detailed insight into a pivotal period of Korean history, even if, frustratingly enough, it ends on a cliffhanger.  The last scenes take place on the 4th of January, 1951, with Seoul about to change hands once again and Wan-suh looking out into the deserted streets of the capital.  Everyone else has evacuated the city in anticipation of the advance of the Northern and Chinese forces – her family, for a number of reasons, is still there…