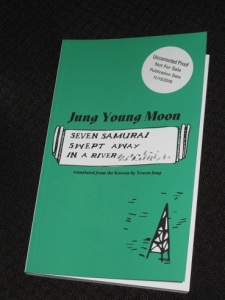 After Monday’s pair of visits to the Korean countryside, today’s post continues the K-Lit theme with a look at the latest novel by an old friend.  However, this one leads us away from the writer’s homeland, taking us to Texas of all places, where we’ll listen to some stories about cowboys, chili and waterfalls.  Yes, it’s time to catch up with the inimitable Jung Young Moon, and if the setting’s new, the style is very familiar – much ado about very little in particular 😉

*****
Seven Samurai Swept Away in a River (translated by Yewon Jung, review copy courtesy of Deep Vellum Publishing) is another set of musings by Korea’s premier spinner of surreal, yet mundane tales.  In a previous work, A Contrived World, the writer took his rambling stories on tour, with much of the book devoted to a trip to San Francisco, and this one repeats the dose in a new locale:

Regular readers will feel right at home from these first few words, but those who feel put off by this repetitive, circling first sentence should perhaps stop here and go look for a different review – it ain’t going to change much…

This time around our curious (in every sense) writer is spending some time with a couple of friends in a small town, and the book is merely the end result of the thoughts he has about the people he meets, the places he visits and the stories he reads in his spare time.  In his familiar manner, Jung starts off describing something that’s caught his eye and simply continues down that path, with the narrative twisting and turning wherever it may take him.  It’s almost like a metaphorical ball of wool being unravelled in our presence, allowing us to follow the writer’s thoughts, even when they’re a tad bizarre and trivial (actually, especially when they’re bizarre and trivial).  Does it all make any sense?  Is there an underlying thread tying it all together?  Well, I suspect that depends very much on the reader.

Seven Samurai Swept Away in a River does have a structure for the reader to fall back on, though.  The book (novel?) is divided into seven sections, each starting with a few idle thoughts before following a central theme the writer has become interested in.  The first (after some tangential discussions on the origins of tofu and the frustrations of eating beans in prison) focuses on the Kennedy assassination, and in particular on Jack Ruby, the man who shot Lee Harvey Oswald.  Yet if you’re expecting a methodical, historical approach, you don’t know JYM:

Perhaps he was so angry, indeed, that he decided to kill Oswald, who deserved to die, before anyone else did, but, on second thought, he decided that there was no reason why he should be the one to kill Oswald.  But then it appeared that no one else would step up and kill him, which made him really angry, and so he decided, once again, to step up, and, although he lacked motive, he thought he should ignore that fact. (p.19)

In fact, one of the writer’s major concerns in this section is for Ruby’s dogs, who the killer (apparently) took with him to the scene of the crime.  Whatever happened to them, Jung wonders…

And so the book continues.  Some of his stories spring from personal encounters, such as his meetings with cowboys (that lead him to consider spending a year or two helping out on a ranch) and a neglected space capsule he sees on a farm, with a bison circling it ominously.  Others come from tales he reads or hears about, with one section exploring Bonnie and Clyde’s liking for hot chocolate and another describing an attempt to set up a utopian socialist community in Texas in the 1850s (Jung is very taken by the thought that, had the scheme taken off, Karl Marx might have become a cowboy himself).

It’s all fascinating stuff, but in truth these stories are simply fuel for Jung’s chosen style of picking up a random thread and following it tenaciously (although that word suggests far more energy and agency than the writer displays).  We’ve all had idle thoughts, the what ifs of lazy sunny afternoons, but they don’t usually go very far.  The difference here is that Jung is simply far more persistent, worrying his ideas like a dog with a bone, gnawing away until something emerges.  That something is generally strange, yet also strangely interesting.

As always, there’s a lot here about Jung himself and his dislike of conventional novels, with frequent mentions of his inability to write fiction, or even keep to a plot.  And speaking of plots, one of the highlights of the book is his ludicrous list of different types of plots, few of which the average reader will have stumbled across before:

He keeps using that word.  I do not think it means what he thinks it means 😉

On my first read, I’d have to say I wasn’t blown away by Seven Samurai Swept Away in a River, preferring some of his earlier work in English.  Vaseline Buddha, for example, while employing much the same style, seems to be a slightly meatier, more coherent work, revealing more of the writer and his concerns.  However, on rereading the book, I enjoyed it more, perhaps because of a greater awareness of the structure, with its seven, loosely connected stories (with no plot, of course).

I also think a lot of what’s good here comes from the work of the other Jung, translator Yewon.  A Contrived World had different people responsible for the English version, and for me it lacked the unique style (the lengthy, meandering sentences, the greater repetition) Jung brought to Vaseline Buddha, and to her contributions to the collection A Most Ambiguous Sunday.  Obviously, I can’t say if this approach is more faithful to the original, but it’s certainly enjoyable and effective.

There is an elephant in the room, though, and that’s the title.  Yes, seven samurai are eventually introduced, and they do end up in the river – but why?  Well, let’s face it, it’s unlikely to be that important, but as it is a major feature of the book, I’ll leave you to find that out for yourselves.  What I will say is that aside from all of Jung’s confusing tangents, Seven Samurai Swept Away in a River is a fun read, and given its setting, it’s perhaps apt that it was picked up by Deep Vellum.  Who better than a Texas-based publisher of fiction in translation to champion an unusual work by a Korean writer, set in the Lone Star state?  No-one, that’s who.  Now, if you’ll excuse me, I have to leave it there for today – you see, it’s getting late, and I need to see a man about a plot…