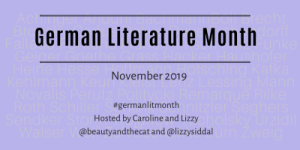 I have set the manuscript of The Golden Chain aside.  Its time had not quite arrived after all, I know that now.  Something still needs to be lived – it needs to be lived, recklessly – to the very end.  So…

Walking through the suburbs was once again torture.  How pure is the winter, forcing people back into their homes.  And look at what is now creeping out into the street, and looking around, and taking it over.  Humans are cave-dwellers and should stay in their caves – leaving only to hunt in the open in the evening.  In the long chestnut-lined avenue, things were much better.  Many leaves, yellow and dried up from the heat, already lie on the road and rustle and smell like autumn.  Nannies sit on benches, large, sweating figures, strangely dappled with grey-green shadows and blinding sunlight.  I must then turn out of the avenue into the sunshine once more.  To both my left and right, fields of oats, full of people harvesting them.  In all this red and gold, the harvesters stand knee-deep in their white linen trousers.  Field crickets make an incredible noise, as if attempting to drown out the pounding and whizzing of the scythes.

In the midst of this heavy, midday light – I see Daahlen’s house before me, a large, almost violently dark cube with a coffee-brown façade.  On the slanted gables looming above the entrance lounge voluptuous stone women, sunning their enormous coffee-brown breasts.  From behind the house, several mighty old trees tower, cold and dark.

I hesitantly crossed the gravel path and made for the stairway.  I stopped in front of a large flower bed, from which all kinds of summer flowers sent forth their fragrances, honeysuckle, sweet pea, tiger lily, a large container of burning colours.  Together, they sent forth a warm, sweet scent, with the sharp tang of herbs thrown in.

I have spent a lot of time in society in my life; nevertheless – whenever I meet strangers – there is always still a touch of self-consciousness in me.  That probably stems from my sensing too clearly what the person whom I approach is thinking – I see myself through their eyes.  Finally, I decided to go inside.  The servant who received me must have been sleeping, there was a red mark on one of his cheeks.  His podgy white face was suitably expressionless, yet he was probably thinking – what’s he doing, walking over here in this heat?  I found the Baron in a dim sitting room.  Red curtains were drawn in all of the windows.  Dressed entirely in white flannel, he was seated in an armchair.  He, too, had a red cheek and must have slept.  He received me with a bout of coughing then greeted my arrival joyfully: “Good to see you… Take a seat.  A rather warm walk, what?  But it’s cool in here.  I understand these things, I have a talent for them.  I have thought, so to speak, scientifically about cooling rooms.”  He spoke in the manner of someone who had been silent for a while and wished to give his voice some exercise.  Every now and then, he looked over in the direction of the door and murmured: “Where could my wife be?”

When steps became audible in the next room, he called out: “Claudia” – and his wife entered.  A rather slim, fine figure – quite colourful – I was immediately struck by the incredibly delicate line of her shoulders.  The blue muslin of her dress flowed so tightly down her body that when she walked, her knees lightly touched the fabric, on her belt she had a (perhaps overly large) bouquet of burgundy honeysuckle.  Her head surprised me initially; it was surrounded by thin, strawberry-blonde hair, the face underneath was white and calm – and in it, large chestnut eyes, colourful and velvety, like the leaves of some chrysanthemums.  “Look, I’ve caught us young Herr von Brühlen,” her husband said.  She walked over slowly, elegantly, offered me her hand, looked at me – just as we would look at a new piece of furniture – and simply said: “Pleased to meet you.”  Then she sat down on the sofa – her back perfectly straight – her hands resting on the seat.  The baron kept talking: “We sit here in our loneliness like spiders  and wait to see if anyone will turn up in our web.  Occasionally, I take a ride out.  A hunting journey – that’s where I caught you.  Yes – yes –“.  The baroness looked at me with a steady, indifferent gaze.  I could tell that she did not think much of this catch.  “During the day, we work,“ the baron continued, “on my great travel writings.”  “You too, baroness?” I asked.  “Yes, me too,” she said.  There was a hint of surprise in her eyes.  I could tell she was taken aback that I was simply sitting there and not looking at her.  Right, I will look at her – and it struck me how beautiful her mouth was – those thin, light-red lines, slightly turned up at the corners, and in their position a certain indefinable potential for movement and expression.  Now she smiled a little, her lips still firmly together, she must have noticed something like astonishment on my face.

“Of course, she works with me,” the baron continued, “she has to read aloud to me of an afternoon everything I wrote in the morning.”  “Very interesting,” I commented, turning to the baroness.  “Oh, very,” she replied, with a voice in which there was something slightly severe, as is often the case with young women.  “If only we didn’t have to deal with such hot places.”  The baron erupted into laughter: “Hot!  Of course, at the moment we’re in the heart of Africa.  But my wife would rather I write about Spitzbergen in summer, and in winter, when it’s freezing outside, about Africa – “.  However, all this laughing brought on another attack of coughing.  Claudia stood up, picked up a glass of water and some powder from the side table, took it over to him, stood beside him until the attack was over, quiet and practised in her duties.  The servant brought in the tea, and Claudia poured for us, and as her husband still hadn’t quite recovered, she also took it upon herself to continue the conversation, remarking: “Yes, the evenings are rather nice out here.”  The baron presently found himself able to speak again: “Oh, anyone who experiences it is bound to come again.  Be sure to visit us regularly – come out every day.  Friends are always welcome in the evening – after our work is done.”  He went on speaking of unbearably hot nights in the Cape Colony, of enormous ants that eat your boots.

Claudia once again sat there quietly – she let the conversation wash over her like a noise she was long accustomed to.  I wasn’t listening either.  But as we sat opposite each other in the red twilight of the room, I sensed clearly how both Claudia and I were coming to terms with the presence of the other.  It was a sort of conversation without words, body to body, being to being – mysterious, yet certain – what we say is irrelevant, what is important is this silent game of questions and answers between two people.  I got up to take my leave of the couple.  “Well, we’ll see you soon, do come.  Fred Spall, our cousin – you know him, of course – also comes over whenever he can.”  Yes, I knew Fred Spall.

As I collected my hat and walking stick from the hall, I saw that Claudia was standing in the open sitting-room door, leaning lightly against the frame.  She looked out through the open front door into the reddish shimmer of the evening.  “It’s so bright out there,” she said, blinking in the light,“ we spend so much time here in the darkness that you develop eyes like an owl.”  I stopped next to her.  I felt that I needed to come up with something special.

“If you go out there now,” I began, “it’s like bathing in a reddish gold.”

“A rather warm bath,” she said, pensively.

“But when the sun goes down,” I went on, “a cool, blue-grey shower arrives.”

Now she had a real smile, her lips slightly apart.  I was satisfied and departed.  As I walked past the large, colourful flower bed, I saw Claudia standing at the front door – small and blue – her hair shimmering in the sun, she shielded her eyes with her hand and gazed out down the path.  The solid old entrance imposed itself strangely like a dark frame of loneliness around the colourful figure.